No. 1 seed Indiana rolls past JMU 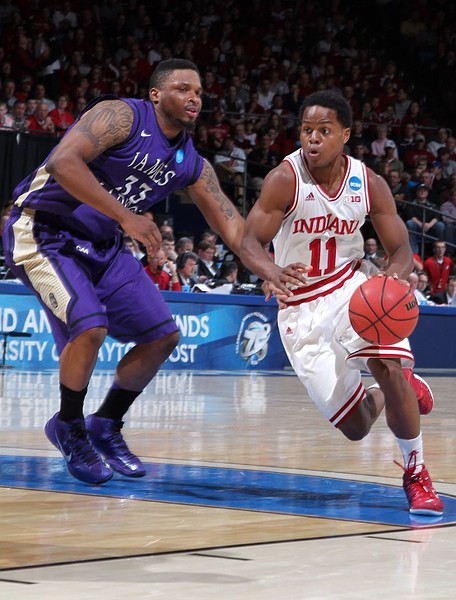 Freshman Yogi Ferrell scored 14 points in the first six minutes as top-seeded Indiana slam dunked its way to an 83-62 win over James Madison in the second round of the NCAA tournament on Friday. Not taking any chances with a No. 16 seed, the Hoosiers (28-6) started fast and built a 33-point lead in the second half over the Dukes (21-15) and opened the tourney with a statement they intend to be around for a while.

FINAL:  Kevin Ferrell went 7-of-12 from the field and led five Indiana players in double digits with 16 points as the Hoosiers defeated James Madison 83-62 on Friday at University of Dayton Arena in Dayton in the second round of the NCAA Tournament.

No. 4 Indiana also got double-digit contributions from Jordan Hulls (10 points), Will Sheehey (15 points), and Cody Zeller and Victor Oladipo, who each scored 11. Ferrell yanked down eight rebounds and handed out six assists.

When the second frame got underway, the Hoosiers took control of the game. Indiana was winning 43-24 early in the second half before it went on a 17-4 run to extend its lead to 32 points midway through the second half.

Andre Nation scored 24 points, hauled in four rebounds, and made 10-of-16 shots from the floor for James Madison (21-15) in a losing effort. Charles Cooke had a quality shooting game, nailing 7-of-12 shots from the field and scoring 18 points. The Dukes shot 8-of-20 from three-point range during the game, good for 40 percent.

The Hoosiers won the rebounding battle en route to victory, pulling down 40 boards to 29 for James Madison. Indiana never trailed in the game. The Hoosiers' largest lead was 33, which came in the middle of the second half. Leading 34-20 late in the first, Indiana used a 9-0 spurt to open its cushion to 23 points with 56 seconds left in the first half. Sheehey finished the run off with a field goal, which helped Indiana lead 43-22 at halftime. Free throws played a key role in the outcome, as the Hoosiers not only went to the line 17 more times than the Dukes, but made the most of their opportunities, shooting 16-of-21. Those free throws came courtesy of 21 fouls committed by James Madison who was 2-of-4 from the line. Indiana snapped the Dukes' five-game winning streak with the victory.

HALFTIME:  Kevin Ferrell scored 14 points for No. 4 Indiana as the Hoosiers lead James Madison 43-22 at the half. The Hoosiers are dominating the rebounding battle so far, with a 22-16 margin.

Indiana never trailed in the first half and led by as many as 23 points.

The game was tied before the Dukes went into a funk, going the next 2:33 without scoring, and allowing the Hoosiers to take a 9-0 lead early in the game.

Seven Indiana players scored in the first half.

Andre Nation and A.J. Davis carried James Madison in the first half with 17 of their team's 22 total points. Nation has scored 10 and Davis has added seven. Indiana has found a way to neutralize the Dukes' leading scorer, Rayshawn Goins. The senior enters halftime with two points, well below his season average of 12.4.