Illinois holds off Colorado to win 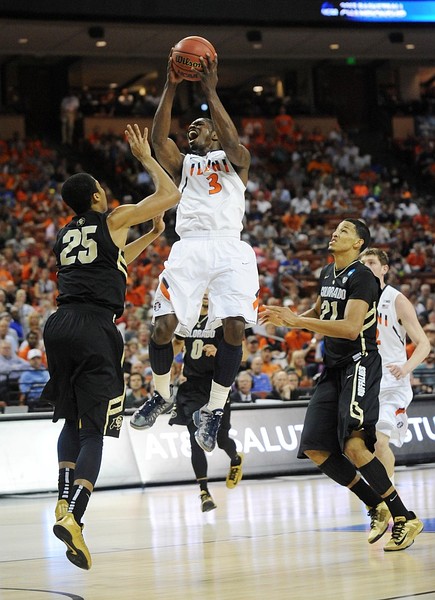 Illinois has been doing it the hard way all season. Why change just because it's the NCAA tournament? After letting a big first-half lead slip away Friday, senior guards Brandon Paul and D.J. Richardson bailed out the Illini with consecutive 3-pointers with 6 minutes to play and No. 7 seed Illinois pulled out a tough 57-49 win over No. 10 Colorado in the second round of East Regional of the NCAA tournament.

FINAL: Illinois used stingy defense to defeat Colorado 57-49 on Friday at Frank Erwin Special Events Center in Austin in the second round of the NCAA Tournament.

Illinois (23-12) held Colorado (21-12) to 33 percent shooting from the field and grabbed 27 defensive rebounds, while only allowing 10 offensive rebounds.

Illinois shot just 31 percent from the field (16-of-52). The Fighting Illini went 17-of-24 from the charity stripe as a team (71 percent). Illinois also got double-digit efforts from D.J. Richardson (14 points) and Brandon Paul (17 points).

Josh Scott had eight points and corralled 13 rebounds for the Buffaloes in a losing effort. Colorado got double-figure scoring from Askia Booker (14 points).

The Fighting Illini trailed 15-11 in the first, but a 26-6 run allowed them to take a 16-point lead late in the first. Abrams finished the run off with a field goal, which helped Illinois lead 37-21 at halftime

HALFTIME: Tracy Abrams and D.J. Richardson have teamed up to give Illinois a 37-21 lead over Colorado. Abrams scored nine points, had four assists, and shot 3-of-5 from the field. Richardson scored 11 points and grabbed three rebounds.

The Fighting Illini were trailing 15-11 before Illinois went on a 26-6 run to take the lead late in the half. Trailing 24-21, the Buffaloes went cold, going 6:44 without a point while the Fighting Illini went on a 13-0 run to open up a 16-point lead. Josh Scott is leading Colorado. The freshman has four points and six rebounds.