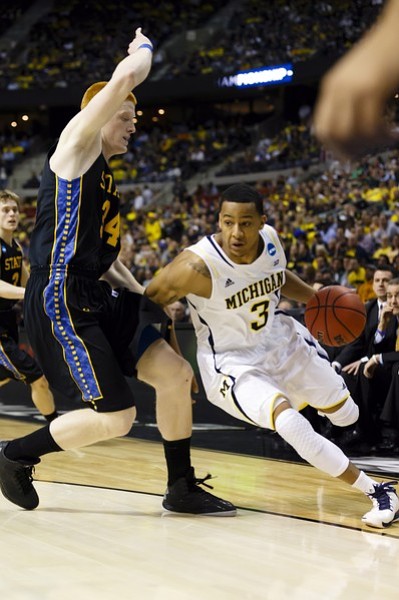 The matchup between Trey Burke and South Dakota State guard Nate Wolters was much hyped but it  didn?t pan out, as both players struggled. Burke missed his first eight shots and didn?t sink his first bucket until the 12:46 mark of the second half. The sophomore hit just 2-of-12 shots and finished with a season-low six points, failing to reach double-figures for the first time this season. Still, No. 4 seed Michigan handled No. 13 seed South Dakota State, 71-56.

Still Burke found a way to impact as a distributor (seven assists) on a rough night that at one point saw him leave the game in the second half following a hard fall. Wolters could relate, as the South Dakota State star knocked down just 3-of-14 shots for 10 points. With Burke off his game, the Michigan supporting cast picked up the slack. And that carried the Wolverines to victory.

Key moment: Michigan led by just four points at halftime, 30-26. The Wolverines went on an 11-4 run to start the half and pushed their lead to 11 points. From there, Michigan cruised to the 15-point triumph, outscoring South Dakota State, 41-30, in the second half.

Key number: 45, Michigan?s 3-point shooting percentage. The Wolverines hit 9-of-20 attempts from beyond the arc. It was part of a hot-shooting night for a Michigan squad that hit 50 percent of its attempts overall in this second-round game.

Key player: Hat?s off to the kids of former NBA stars. Tim Hardaway, Jr. helped fill the scoring gap created by Burke?s off night, notching 21 points. The junior was on fire from 3-point range, hitting 5-of-7. Hardaway was last over 20 on Feb. 5 vs. Ohio State. Big props to Glenn Robinson III, who also had 21 points, hitting 8-of-9 shots. Robinson had cracked double-figures just once in the previous six games. He last had more than 20 vs. Penn State on Feb. 17, when he also had 21.