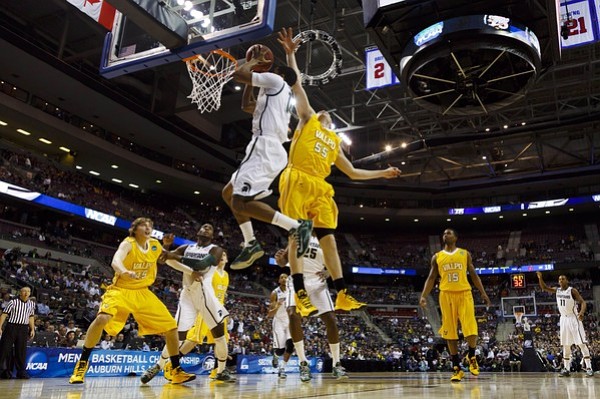 Derrick Nix had 23 points and a career-high 15 rebounds to help power third-seeded Michigan State past 14th-seeded Valparaiso 65-54 on Thursday. The Spartans went on a 26-5 run in the first half to take control.

Michigan State (26-8) will play the winner of the Memphis-St. Mary's game on Saturday when Spartans coach Tom Izzo will be shooting for a spot in the round of 16 for the fifth time in six years.

FINAL: Derrick Nix scored 23 points and grabbed 14 rebounds to lift Michigan State to a 65-54 win over Valparaiso on Thursday at The Palace of Auburn Hills in Auburn Hills in the second round of the NCAA Tournament. Find stats and photos in this post.

Ben Boggs had 15 points and shot 4-of-6 from the field for Valparaiso (26-8) in the game. The Crusaders struggled from the floor, shooting 35 percent (19-of-54). Valparaiso also got double-digit efforts from Matt Kenney (10 points) and Erik Buggs (14 points).

HALFTIME: Michigan State held Valparaiso's offense to 24 percent shooting, helping the Spartans to a 35-18 halftime advantage. The rebounding edge belongs with Michigan State, by a 26-14 margin on the boards.

The Spartans were leading 18-12 when they used a 14-0 spurt to widen their advantage to a 20-point margin.

Michigan State hit four threes in the first half, shooting 44 percent from deep. After already giving up 10 offensive rebounds to the Spartans, the Crusaders will have to keep Michigan State off the boards in the second half.

Derrick Nix is leading the Spartans. The senior has nine points and four rebounds. Matt Kenney led Valparaiso in the first half, with seven points.