NCAA Preview: Can Illini get hot at right time? 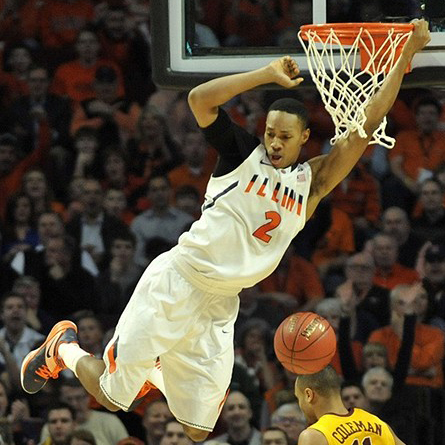 Illinois is a tough team to read. On any given night, John Groce's club is capable of beating any team, evidenced by signature wins over Butler, Gonzaga, Indiana and Ohio State. Then, on other nights, they look like they can lose to just about any team. Which Illinois team will show up when the tourney tips off? That's the question.

How far can it go? The No. 7 seed Fighting Illini could slip into the Sweet 16-if their shots are falling. Illinois hasn?t won two games in the Big Dance since making a run to the title game in 2005. Anything beyond a win or two would be gravy for a team that has battled consistency issues despite having four seniors who all play roles.

Best third-round matchup: No. 2 Miami (Fla.) figures to be waiting for Illinois in the second game. And this is a very good Hurricanes team that won the ACC regular-season title and then the ACC tournament-yet, Miami wasn?t a No. 1 seed. Go figure. Jim Larranaga is a veteran coach of a veteran team who led George Mason to the Final Four in 2006. The 63-year-old knows what he?s doing.

Chance to advance to the Sweet 16: Slim. But, look, if senior gunners Brandon Paul and D.J. Richardson are hitting their shots, the Fighting Illini can beat anyone. They showed it during the season, when they dumped the likes of Butler, Gonzaga, Ohio State and Indiana. This isn?t a physical team-and attention to detail on defense comes and goes. And it lacks production on the interior. Instead, Illinois likes to run and shoot. The problem: You can?t shoot well each game.

Who needs to shine: Brandon Paul. He is the unquestioned star who isn?t afraid to shoot from anywhere on the court. That?s good and bad, as Paul sometimes has poor shot selection. Still, he?s a special talent who showed his ample capabilities by pouring in 43 points last season in a win over Ohio State. Paul is an explosive talent capable of big things on any given night and able to shoot Illinois to victory-or to shoot it out of victory.

X-factor: Tracy Abrams. The sophomore point man was the team MVP last season. He has endured bouts of inconsistency this season-like every Illinois player. But it?s vital for Abrams to run the team with aplomb and authority, limiting mistakes, making smart decisions with the ball, knocking down some shots and getting into the lane on drives. Abrams can be a real catalyst.