NCAA Preview: Which Minnesota team will show up? 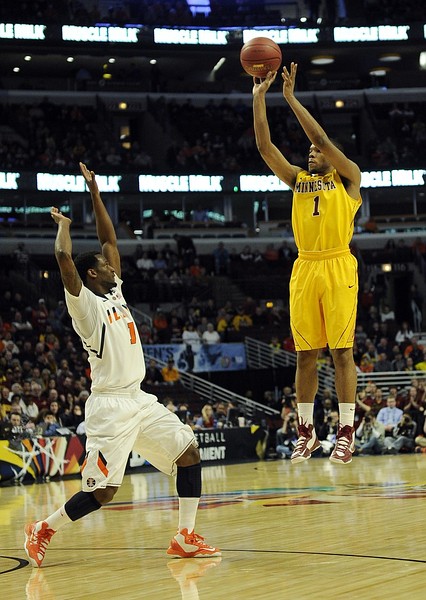 Many are picking the No. 11 seed Gophers to knock off No. 6 UCLA in the first round of their South Region clash. Yes, Minnesota is in a funk, losing three in a row and seven of 10. But this still is a talented, athletic and physical team that?s capable of big things with players like Andre Hollins, Austin Hollins, Rodney Williams and Trevor Mbakwe, among others.

How far can it go? Remember: Minnesota beat No. 1 Indiana a few weeks ago, in addition to Michigan State in the Big Ten opener. The Bruins are hampered by injury with star freshman shooter Jordan Adams out with a foot injury. And UCLA-the Pac-12 regular-season champ–isn?t an overly physical team and may be over-seeded, which means Minnesota can win one game. Still, the Bruins have talent in the likes of Shabazz Muhammad and Travis Wear.

Best third-round matchup: No. 3 Florida, the SEC regular-season champ, figures to be waiting in the second game if Minnesota dumps UCLA. The Gators are good-maybe even Final Four good. Billy Donovan has one of the nation?s top defensive teams. And there?s a great group of guards, including Mike Rosario, Kenny Boynton and Scottie Wilbekin. Could Minnesota score enough to beat the Gators?

Chance to advance to the Sweet 16: Not good. No. 6 UCLA and then likely No. 3 Florida are two formidable obstacles standing between the Golden Gophers and their first trip to the second weekend of the tourney since 1997. Minnesota may lack the offensive skill to keep pace with both teams, as Tubby Smith looks for his first NCAA win as Golden Gophers coach (0-2) in the school?s first Big Dance appearance since 2010.

Who needs to shine: Trevor Mbakwe. Too often, the other players forget about the big fella in the middle. And, that?s usually bad news. The offense needs to run through Mbakwe, who is a physical force and tough matchup for most teams. If the muscular sixth-year senior is getting the ball on the blocks, it?s a good thing for the team as he?s either scoring or drawing fouls. He?s also a ferocious rebounder, which isn?t a strength for UCLA.

X-factor: Andre Hollins. The sophomore guard is equal parts good and bad. At times, he can be sloppy with the ball and turnover-prone. His shooting also is spotty. But Hollins also is capable of taking over a game with his quickness to the basket and passing skills. If he struggles, Minnesota?s chance for victory diminishes significantly. Is Hollins playing under control and making good decision?