Today's links: What lies ahead in NCAA tourney? 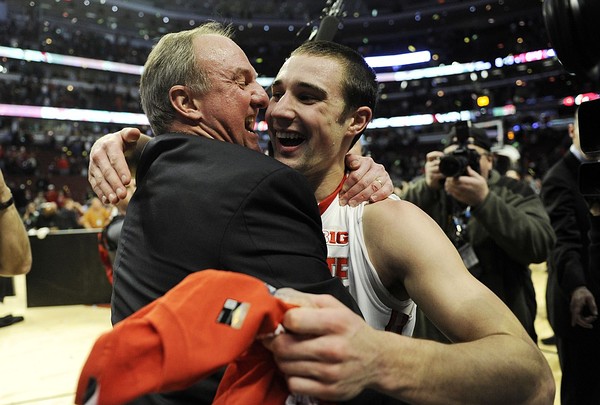 The dust has settled after a fast and furious Selection Sunday. Do you have your bracket filled out? If not, there?s time. Until then, check out what some of the Big Ten?s leading pundits are scribbling about.

No team enters the Big Dance on a bigger role than Ohio State, which is riding an eight-game winning skein and is coming off the Big Ten tourney title. Doug Lesmerises of the Cleveland Plain Dealer tells us four things he thinks about the smoking-hot Buckeyes.

One thing I know for sure: This is a terrific defensive team, which is why Ohio State is rolling. During their eight-game winning skein, the Buckeyes haven?t allowed more than 60 points in any game. Could a second trip in a row to the Final Four be in the offing?

For some teams, the NCAA tournament is all about second chances, an opportunity at a do-over following a season of underachievement. Such is the case for Minnesota, which went 8-10 in Big Ten play during a season of maddening inconsistency.

This could be a dangerous team if it plays with physicality, takes care of the ball and hits some shots from the perimeter. And, no doubt, Tubby Smith could use a nice run. He?s 0-2 in the Big Dance at Minnesota.

Prepare yourself, Wisconsin fans: Your Badgers are gonna take on a white-hot Ole Miss team coming off an improbable run to the SEC tourney title. You also will see up close one of the nation?s hot doggiest and underrated players in Marshall Henderson, the ?Mouth of the South.?

This is gonna be fun.

Trey Burke was a freshman sensation last season, but Michigan got dumped in the first round of the NCAA tourney. So, he opted to come back to take care of unfinished business in March.

But, Burke?s team is limping into the Big Dance, 6-6 in its last 12 games. I get the feeling the 2013 NCAA experience won?t be much better for Burke and the Wolverines. Leadership? Defense? Those issues could be perilous for Michigan.

Illinois has had a wild season. The word ?roller coaster? comes to mind with high-highs (wins over Butler, Gonzaga, Ohio State) and low-lows (losses to Northwestern, Purdue, Iowa). But the Fighting Illini are in the Big Dance. And thrilled, of course.

The No. 7 Illini can beat No. 10 Colorado-and maybe do more, if the shots are falling for a senior-dominated team that has Illinois back in the Big Dance after a one-year absence.

Michigan State is the last Big Ten team to win the national title, cutting down the nets in 2000. Can the Spartans make another run? Well, it will be key for MSU to hit some shots, as perimeter shooting has been spotty. MSU writers Graham Couch and Joe Rexrode discuss the Spartans? prospects in this video.

Selection Sunday came and went without a call from the NCAA tournament committee to Iowa. No shock there after the Hawkeyes lost in the second round of the NCAA tourney to Michigan State. That?s seven seasons in a row without an NCAA invite-and 11 times in 14 years-for Iowa.

But next year, Iowa will be loaded and should be a lock for the Big Dance. No pressure, Fran McCaffery.

It?s an understatement to say Purdue?s season was a disappointment, but this was supposed to be a rebuilding year. The Boilermakers have a losing record and will miss the NCAA tourney for the first time since 2006. But Matt Painter?s squad will play on in the CBI. In fact, Purdue is the first Big Ten team to play in the event. Hey, this isn?t about pride-it?s about player development. And Purdue needs to play more games to help youngsters like A.J. Hammons, Ronnie Johnson and Raphael Davis continue to develop.

Unlike Purdue, Nebraska coach Tim Miles said time and again that he wasn?t going to accept a bid to the CBI. Well, he?s a man of this word. He?s also a coach who reminds the great Lee Barfknecht of the Omaha World-Herald of Kansas State football coach Bill Snyder.

This is a good thing.

They can?t stop talking about the quarterback battle at Penn State this spring. Why not? It?s a key tussle, as the staff must replace Matt McGloin. Check out Bill O?Brien discussing what he looks for in a signal-caller in this video.

Digger Phelps just compared Derrick Nix's style of play to Draymond Green's which makes me wonder what the hell Phelps watches every Sat.

My take: He?s busy picking out ties that match his hi-liter.

The Midwest is brutal, the South is middle-heavy, the East has two of the top 4 teams in the country, the West is weak.

My take: (I am nodding in agreement.)

The NCAA could eliminate a lot of confusion by referring to the First Four as zero round rather than first round.

My take: This is a brilliant idea-but, it won?t happen because it?s, well, brilliant.

Let the controversy begin; anybody else surprised that Iowa fell to a No. 3 seed?

Tubby on his status: "I don?t apologize or defend anything because we do the best we can. We do a good job. That?s why we?re NCAA bound."

My take: But it goes without saying that it sure couldn?t hurt to win an NCAA game.

My take: Not sure about that, but I can see the Buckeyes in the Final Four for a second season in a row. That West Region is weak.

So just saw this. Dick Vitale and Jay Bilas both picking IU to play Louisville in the title game and lose.

My take: Can?t believe a Badgers? win wouldn?t have at least made them a No. 4 seed.

Gotta love the Big Ten tournament – 20 minutes later, no one cares. Or in the case of NCAA tourney selection committee, 20 min. before

My take: So true!

Matt Painter after BTT loss: 'I want to play games. I think it's important for young team to play as many games as possible.' #purdue

My take: Nothing beats experience.

So am I a moron if I still pick Duke to win it all? I think I'm 0-for-history in picking a winner.

My take: Join the club.

Too bad Iowa missed the tournament. Good conference record, but out of conference RPI killed the Hawkeyes.

My take: Let that be a lesson.