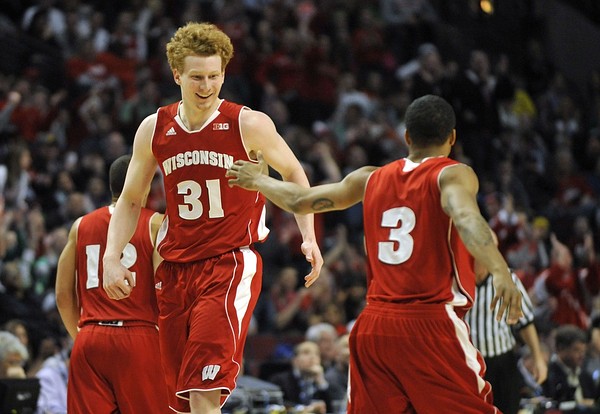 Wisconsin may be under-seeded as a No. 5, but it could be pushed by No. 12 Ole Miss and Marshall Henderson in the opener. The Rebels are hot, coming off the SEC tourney title. This team can score. But good defense typically trumps good offense. And no one does defense like the Badgers.

How far can the Badgers go? It would not be a shock to see this team in the West Region final playing a rematch of the Big Ten tourney title game vs. No. 2 seed Ohio State for a berth in the Final Four. The Badgers aren?t an overly talented team, but they are a veteran team. Players like seniors Jared Berggren, Mike Bruesewitz and Ryan Evans could take this team far. And Ben Brust is a shot-maker who has limitless range. But it?s defense led by Berggren and Evans that makes Wisconsin special. The Badgers defend the perimeter like few teams-and they don?t foul.

Best third-round matchup: Playing No. 4 Kansas State, which is coached by former Illinois boss Bruce Weber, would be interesting and fun. Frank Martin left Weber a stacked roster-and Weber took K-State to a share of its first league title since 1977. This isn?t a great shooting team, but it is a threat from 3-point range. Guarding the arc is a Wisconsin strength, however.

Chance to advance to Sweet 16: Good. The Badgers have a favorable draw in what most feel is the weakest region in the field: the West. For Wisconsin to have success, it must impose its will on opponents. What?s that mean? The Badgers need to have the game played at their slow, methodical and plodding pace. Bo Ryan?s team works the shot clock, making foes defend for almost the full 35 seconds. If Wisconsin can keep the game in 50s or 60s, it has a chance. If it gets caught in a shoot-out, it?s likely sunk.

Who needs to shine: The Badgers need to have their big men hit some shots. That?s when this team is good. When guys like like Berggren, Evans and Bruesewitz are lofting bricks, the team can get sideways. We saw that in a few ugly losses this season. The 58-43 defeat at Michigan State on March 7 was a perfect example. And the 69-56 home loss to Purdue before that was the same deal.

X-factor: The point guards, Traevon Jackson and George Marshall. They must play well, limiting turnovers, distributing the ball and hitting the open shot when they get it. The duo also must play good defense. Jackson is capable, but Marshall remains a work in progress on the defensive end.