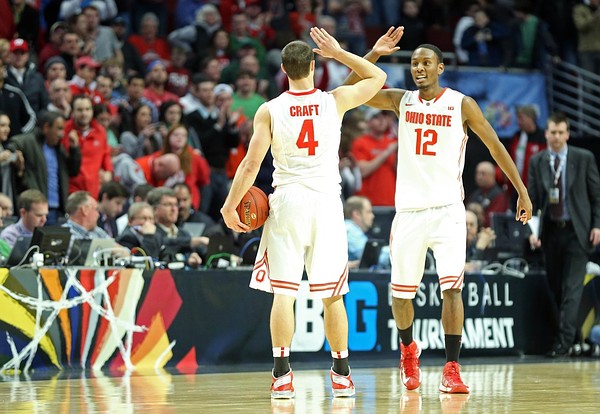 The NCAA bracket features seven Big Ten teams and that's no shock to anyone following the conference. And the Big Ten's power was reflected in four teams being seeded No. 4 or higher-No. 1 Indiana; No. 2 Ohio State; No. 3 Michigan State; No. 4 Michigan. Wisconsin just missed as a No. 5 seed.

Here?s a look at the Big Dance through a Big Ten lens, as the league looks for its first national championship since Michigan State cut down the nets after the 1999-2000 season.

Toughest path: Michigan State. Bracket makers didn?t do the Spartans any favors, making them a No. 3 seed in a Midwest Region that also includes No. 1 Louisville-the top overall seed–and No. 2 Duke, which may have been a No. 1 had it won the ACC tourney. Plus, tourney darling and smoking hot A-10 champ Saint Louis is a No. 4 in the region as it plays to honor the late Rick Majerus. Yes, Michigan State will benefit from opening in Auburn Hills against Valparaiso and then playing in Indianapolis in the Sweet 16-if it makes it that far. But there are myriad difficult hurdles for Michigan State to hurdle. If Tom Izzo?s team makes it to Atlanta, it will have earned it-and then some.

Easiest path: Ohio State. Please forgive Thad Matta for smiling so much. His Buckeyes not only are freshly-minted Big Ten tourney champs, but they also have the easiest path of all Big Ten teams to the Final Four in Atlanta. Ohio State is the No. 2 seed in the West, opening action in comfy/cozy Dayton, Ohio. Gonzaga is the No. 1 seed in the region-and maybe one of the weakest No. 1 seeds in the last quarter century. The Buckeyes open vs. No. 15 speed bump Iona; No. 7 Notre Dame is likely next. Irish boss Mike Brey will make his ninth NCAA appearance with the Irish; he has made exactly one Sweet 16. Enough said. Then, Gonzaga or-god forbid-No. 5 Wisconsin stands between OSU and the Final Four.

Hot team: Ohio State enters the Big Dance on an eight-game winning streak. The Buckeyes are playing tremendous defense, not allowing more than 60 points in any game during that run headed into their opener against Iona. And the scoring has become more evenly distributed, with Deshaun Thomas not being a one-man show each night out with players like Sam Thompson, LaQuinton Ross and Shannon Scott stepping up. This is a deadly team that knows how to deal with adversity and win in March. Remember: OSU was in the Final Four last year with Jared Sullinger and William Buford.

Cold team: Minnesota. The Gophers are limping into the Big Dance having lost their last three games. Wait, it?s even worse-Minnesota is 3-7 in its last 10 games. A season that began with the promised of a 15-1 start and top-10 ranking has melted away into a No. 11 seed and first-round matchup in Austin, Texas, vs. No. 6 UCLA in the South Region. Tubby Smith is 0-2 in NCAA tourney games as Gophers coach, but his physical team matches up well with the Bruins. Beat UCLA, and No. 3 Florida may wait. But, let?s take this one game at a time, OK?

Over seeded: Michigan. This team crossed the finish line running on fumes, going 6-6 in its last 12 games. One of the losses was to a Penn State team that was 0-14 in the Big Ten. And the Wolverines needed a late, heroic rally to win at Purdue over the stretch. Yes, Michigan started the season 16-0, but that seems like decades ago. This team has been outed. It plays poor defense and lacks toughness and leadership. Yet, Michigan is a No. 4 seed playing in nearby Auburn Hills, Mich. March is all about second chances, and Michigan has been given a nice opportunity to make amends for its poor finish.

Under seeded: At No. 5 in the West, Wisconsin is under seeded. The Badgers went 6-3 to finish the season, marching to the Big Ten title game as a No. 4 seed in the West, opening in Kansas City. And Wisconsin has beaten the likes of Indiana (twice); Michigan (twice); Illinois (twice); Ohio State; Minnesota. And you are telling me No. 4 seeds like Kansas State, Syracuse, Michigan and Saint Louis are better or more deserving? Hogwash.

Most likely to get upset in the first game: Pack lightly, Illinois. The No. 7 Fighting Illini will battle No. 10 Colorado in Austin, Texas. Learn about Colorardo on this team report page. Illinois isn?t exactly sprinting into the Big Dance, losers of three of four and four of six. John Groce?s team has been famous for its inconsistency, beating the likes of Butler, Gonzaga and Ohio State and falling to the likes of Northwestern, Purdue and Iowa. If Illinois? shots aren?t falling, it struggles and has shown an ability to be fabulously ordinary and lose to anyone because of it. Hold your breath, chief.

Most likely to not see the Sweet 16: Michigan, which went 6-6 in its last 12 games. This is familiar territory for the Wolverines, who got unceremoniously dumped in the opening round of last year?s Big Dance by John Groce and Ohio in a 4-13 game. Well, looky here: Michigan is in another 4-13 game, taking on South Dakota State in Auburn Hills, Mich. Michigan has what it takes to handle the Jackrabbits. But VCU or Akron loom after that. Scary teams. Fun factoid: The Wolverines haven?t advanced to the Sweet 16 since-Are you ready for this?-1994.

Most likely to advance to the Final Four: Ohio State has a nice path to Atlanta, but don?t discount No. 1 Indiana. The Hoosiers lost their cushy spot atop the Midwest Region with a defeat in the Big Ten tourney and hot finishes by Louisville and Kansas. In fact, Indiana is just the No. 3 overall seed, playing in the East and opening in Dayton, Ohio. This is an uber-talented team led by Cody Zeller, Victor Oladipo, Christian Watford and Jordan Hulls, among others. The Hoosiers? likely path to their first Final Four since 2002: Beat the winner of a play-in game between LIU-Brooklyn and James Madison; No. 8 N.C. State; No. 4 Syracuse; No. 2 Miami (Fla.). Not overly daunting for the undisputed Big Ten regular-season champs who are motivated. Highly motivated.

Best opening round matchup: I can?t wait to watch the No. 5 Badgers clash with No. 12 Ole Miss in the West Region in Kansas City. Wisconsin is coming off a run to the Big Ten tourney title game. The Rebels are hot off a shocking jaunt to the SEC tournament championship led by the way-crazy shooting and smack-talking Marshall Henderson. The 5-12 game historically has been a staple for upsets. Could this be another? Ole Miss sure looks much better than a No. 12 seed.

Best potential second-round matchup: How about No. 5 Wisconsin taking on No. 4 Kansas State in the West Region in Kansas City? This game would pit former Illinois coach Bruce Weber vs. Bo Ryan and the Badgers. Wisconsin has to beat No. 12 Ole Miss, while Kansas State must topple the winner of a play-in game between Boise State and LaSalle.

Best potential Sweet 16 matchup: It doesn?t get much better than No. 3 Michigan State vs. No. 2 Duke, right? These are two of college basketball?s blue-blood programs potentially squaring off in the Midwest Region in Indianapolis. The Blue Devils nearly were a No. 1 seed, while the Spartans played like one of the Big Ten?s best teams all season in the nation?s top league. The physical Spartans could pose issues for the Blue Devils.