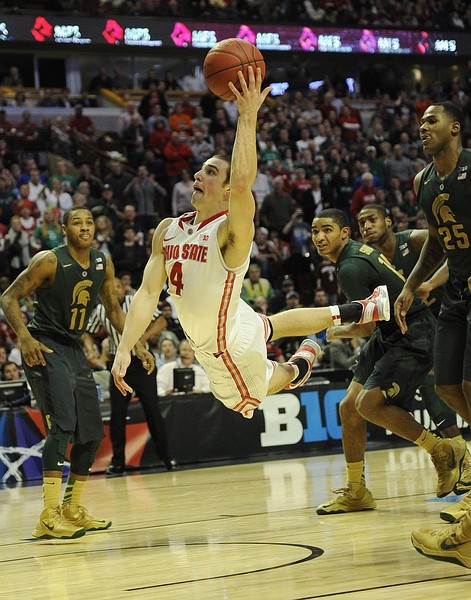 And then there were two. No. 2 Ohio State and No. 4 Wisconsin will meet in the Big Ten tourney title game at 3:30 p.m. ET Sunday. The Buckeyes advanced to their fifth consecutive title game by topping No. 3 Michigan State, while the Badgers eliminated No. 1 Indiana.

Before the title game, our guys preview the matchup on the"Big Ten Tip-Off Show" at 3 p.m. ET on BTN/BTN2Go. And at 7, don't forget about our "Selection Sunday Special."

It?s fitting that Ohio State and Wisconsin are meeting in the Big Ten title game, as they arguably have emerged as the Big Ten?s bellwether programs.

Ohio State has won three Big Ten tourney titles since 2007; Wisconsin has won one. Want more? The Buckeyes have won five regular-season titles with a Final Four appearance since 2006. Wisconsin won a regular-season crown in 2008. And Thad Matt and Bo Ryan have among the highest winning percentages in the history of Big Ten play. Entering the Big Ten tourney, Ryan had a .706 Big Ten winning percentage; Matta had a .712.

Expect a rugged, defensive effort with possessions being precious. Wisconsin looks to have an edge on the inside, but Ohio State has the advantage in the backcourt.

So, let?s decide-for a season, at least-who is Big Ten king in what is a rematch of the 2007 Big Ten title game, won 66-49 by Ohio State right here in the United Center.

The skinny on Wisconsin. The Badgers continue to confound naysayers, marching to the Big Ten title game for the first time since 2008-when Wisconsin also won the championship. The Badgers have won three in a row after ending the season by losing two in succession. A victory over Ohio State on Sunday could make Wisconsin a No. 3 seed in the Big Dance. At the worst, Wisconsin looks like a No. 4 seed. The Badgers reached this point by dumping No. 5 Michigan and No. 1 Indiana. Terrific defense has been the backbone of Wisconsin?s run in Chicago. No shock there. The Badgers do a great job of denying 3-point attempts. And they defend the entry pass into the post as well as any team. On offense, Wisconsin excels at spreading the floor to create driving lanes for Traevon Jackson, George Marshall and Ben Brust. But it?s the big fellas that make the Badgers go. Ryan Evans is coming off a terrific game in the victory over Indiana, scoring a game-high 16 points along with a team-high eight rebounds, four blocks and four assists. Jared Berggren is a defensive force in the paint whose is an underrated athlete. He has struggled with his shot but still has a capable jumper. Mike Bruesewitz does a bit of everything-shot, defend, antagonize. Sam Dekker is the Big Ten sixth man of the year. And he played like it vs. Indiana, scoring 11 points in 20 minutes of action. Stamp him a future star.

Key number: 38.9, the Badgers? shooting percentage from 3-point range vs. Indiana. Wisconsin connected on 7-of-18 attempts from beyond the arc. When the Badgers are hitting from long range, they are especially difficult to beat. Bruesewitz, Evans, Berggren, Brust, Jackson, Dekker, Marshall and Frank Kaminsky all have the green light. And if a last-second shot is needed, Jackson has proven to be a clutch performer. He most recently hit a game-winning 3-pointer at Penn State in the final moments in the regular-season finale.

The skinny on Ohio State. The Buckeyes are the hottest team in the Big Ten, ripping off seven victories in a row since getting annihilated 71-49 at Wisconsin on Feb. 17. Ohio State has done it with terrific defense, allowing 60 points or less in every game during the seven-game skein. The Buckeyes also have gotten a more well-rounded offensive effort from Deshaun Thomas? supporting cast. Sam Thompson has stepped up with 19- and nine-pint efforts of late. And Shannon Scott, LaQuinton Ross, Amir Williams and Evan Ravenel also have had their moments. Lenzelle Smith, Jr., and Aaron Craft have remained steady second and third options. This is a focused and talented team that is coming off a Final Four appearance in 2012 and is playing like it doesn?t miss Jared Sullinger and William Buford.

Key number: 9, assists for Aaron Craft against Michigan State. It was one of many stunning numbers for the Ohio State point man in the win on Saturday. Craft finished with 20 points and also added four steals and three rebounds. He is playing some of his best ball of the season at just the right time. And a win on Sunday could push this team to a No. 2 seed, priming it for a run in the Big Dance.

This season: These teams met twice, with each winning on their home floor. Ohio State prevailed, 58-49, in Columbus, fueled by 25 points from Deshaun Thomas. Ohio State led only 41-39 with 11:25 left. That?s when Thomas ripped off 10 of the Buckeyes? 15 points in a backbreaking run. In the second meeting, Wisconsin clobbered Ohio State, 71-49, in Madison. The Badgers shot lights out, hitting 53 percent of their attempts. Wisconsin was fueled by an 18-point first-half run that put it up, 24-6. Ohio State never got in the game. Thad Matta was exasperated.