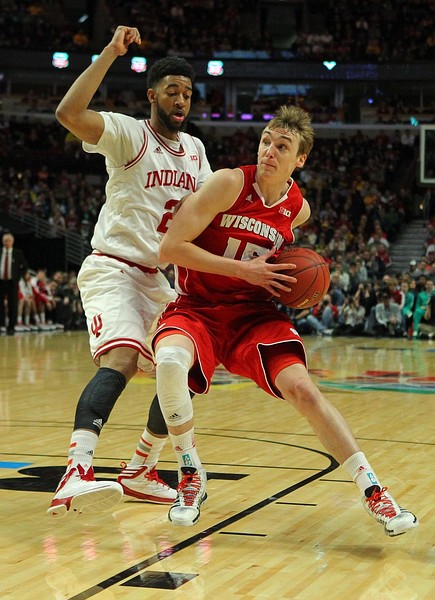 The Badgers slowed down the prolific Indiana attack, keeping the Hoosiers under 60 points. And this was an Indiana squad that came in averaging 80.8 points in all games. Wisconsin did a great job denying entry passes to the post and rarely offered open looks from 3-point range. Bottom line: It was a textbook Wisconsin victory. You see, this is why Bo Ryan was the Big Ten coach of the year. And, that?s 12 wins in a row for Wisconsin over Indiana.

Key moment: Wisconsin built a nine-point lead in the second half-only to see it vaporize into a 43-43 tie with 12:07 left. But the Badgers didn?t panic or implode. Sam Dekker hit a layup to put Wisconsin back up and the Badgers never looked back, building the lead back up to nine with 1:05 left en route to cruising to the win over Indiana.

Key player: Several Badgers had big games, as Ben Brust had 12 points and Sam Dekker and Jared Berggren each had 11. But no one was bigger than forward Ryan Evans. The senior hit 7-of-12 shots for 16 points while also grabbing eight rebounds, four assists and four blocks. Cody Zeller finished with 13 points and 11 rebounds.

What?s next: Wisconsin will play the winner of the Michigan State-Ohio State game for a shot at its first Big Ten tourney title since 2008. Indiana has never won the tourney crown and has played in the title game just once (2001).