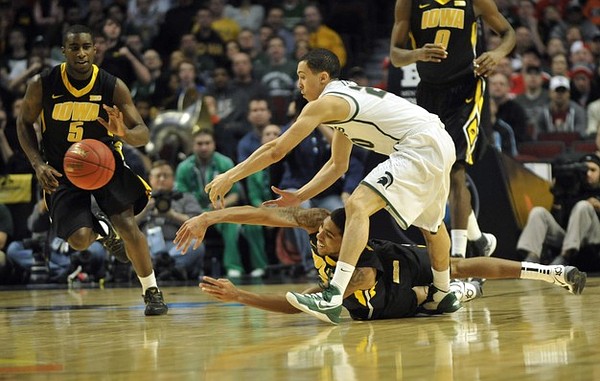 Adreian Payne had 18 points and 10 rebounds, leading No. 8 Michigan State to a rugged 59-56 victory over Iowa in the Big Ten quarterfinals on Friday night. Keith Appling and Gary Harris had 13 points apiece for the Spartans (25-7), who trailed by 12 midway through the second half. They advance to play Ohio State in the next round in a rematch of last season's tournament championship, won by Michigan State.


FINAL: Michigan State trailed in the crunch time on Friday, but took the lead for good on a field goal with 4:09 to go by Gary Harris and hung on for a 59-56 win over Iowa at United Center in Chicago in the Big Ten Tourney.

The Spartans, thanks to a field goal by Payne, led by eight points with 1:51 remaining and yet nearly saw that lead disappear completely.

Michigan State struggled from the floor, shooting 39 percent (22-of-56). The Spartans were tough on the offensive boards, grabbing 17. Other Michigan State scorers in double figures included Harris and Keith Appling, who each scored 13.

Mike Gesell scored nine points, yanked down three rebounds, and made 2-of-3 shots from the floor for Iowa (21-12) in the game. Anthony Clemmons had a quality shooting game, nailing 3-of-5 shots from the field and scoring six points.

HALFTIME: Iowa held Michigan State's offense to just eight first-half field goals, and the Hawkeyes lead 30-20 at halftime. Iowa led from the start and led by as many as 10 points.

Iowa has the lead at halftime due in large part to its ability to get to the foul line. Through 20 minutes of play, the Hawkeyes are 8-for-9 from the free throw line.

Keith Appling, the leading scorer this season for the Spartans, has not made much of an impact through the first 20 minutes. The junior is averaging 13.5 per game for the year, but has just two points at the break. Michigan State goes into the break with the offensive rebounding advantage, with 11 to the Hawkeyes' three.

Adreian Payne is leading Michigan State. The junior has seven points and five rebounds. Mike Gesell led Iowa in the first half, with six points and three rebounds.

Iowa's Olaseni dunks on the Spartans.

Basabe denies a jumper by Nix.

Payne jams the high pass down.

Appling with the power jam.