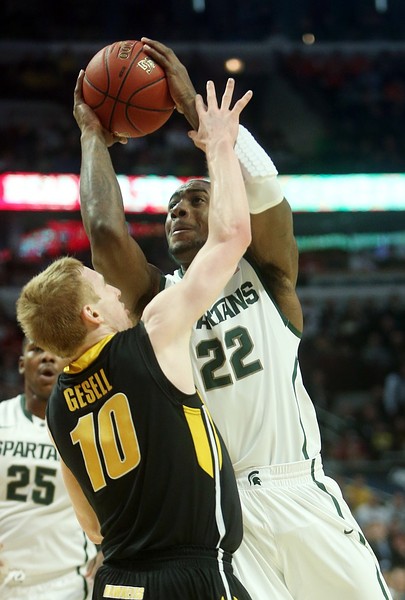 The Spartans had lots of chances to fold but never did. They came out sluggish and fell behind quickly, ending the first half trailing, 30-20. Wait, it got worse. With 10:55 left in the game, Iowa had pushed its lead to 12 points, 45-33. That?s when the Spartans went to work, chipping away and refusing to buckle.

Then, finally, at the 4:11 mark, Gary Harris hit a 3-pointer to put MSU up, 50-49. The Spartans never trailed again, outscoring Iowa 22-11 over those final fateful 10:55. The loss ends any hopes Iowa had of earning an NCAA at-large bid. Instead, it?s likely off to the NIT-again.

Key moment: Clinging to a 57-56 lead with 30 seconds left, Gary Harris was fouled. The Big Ten freshman of the year proceeded to swish both free throws. And then, MSU played tight defense to finish out the comeback.

Key player: Adreian Payne led MSU with 18 points and 10 rebounds. But let?s go with Keith Appling. He seemingly willed the Spartans to victory, coming alive in the second half after scoring just two points in the first half. Appling finished with 13 points and two thunderous dunks that embodied his determination. He was all over the floor.

Key number: 32, Michigan State?s points in the paint. The Spartans used their big men to control the middle. But when Payne, Derrick Nix or Branden Dawson weren?t scoring, the Spartans were getting to the rim on drives by Appling or Harris. MSU also won the battle of the glass, 34-27.

What?s next: Michigan State will play Ohio State on Saturday for a chance to play in the title game. The teams split their two games this season, with each winning on their home court. MSU won in East Lansing, 59-56; the Buckeyes won in Columbus, 68-60.