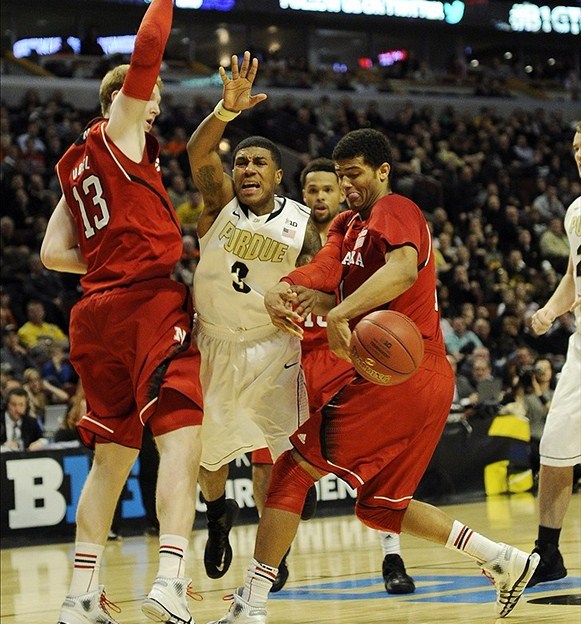 Time and again, Nebraska got right to the rim for easy baskets off of drives. Tim Miles? squad shot 44.7 percent and hit 12-of-17 free throws. Conversely, Purdue shot 40 percent and hit just 7-of-14 free throws. That basically was the difference in a close game. The Huskers had a two-point halftime lead that they pushed to 11 at one point in the second half.

Key moment: Nebraska clung to 56-55 lead in the final minute with Ray Gallegos going to the line. He made just one of two free throws, giving Purdue a chance to tie and force overtime. Terone Johnson got into the lane and missed, rebounded it–and missed again. Game over.

Key player: Nebraska big man Brandon Ubel didn?t play the first time these teams met. He did today. And the big fella was the difference, hitting 4-of-11 shots and 8-of-11 free throws for 16 points. Ubel also grabbed eight rebounds, blocked a shot and dished five assists. The guy was a stud. Period.

Key number: 2, three-pointers made by Purdue on 12 attempts. And the Boilermakers? first bomb didn?t come until almost 36 minutes into the game. D.J. Byrd and Terone Johnson had to have big games for Purdue to have a shot. They flopped, going a combined 10-of-28 from the field. You do the math. It?s bad.

What?s next: Nebraska wins its first Big Ten tourney game ever and will play No. 2 seed Ohio State on Friday. The Buckeyes dumped the Huskers twice during the season, taking a 70-44 win in Columbus and a 63-56 victory in Lincoln.