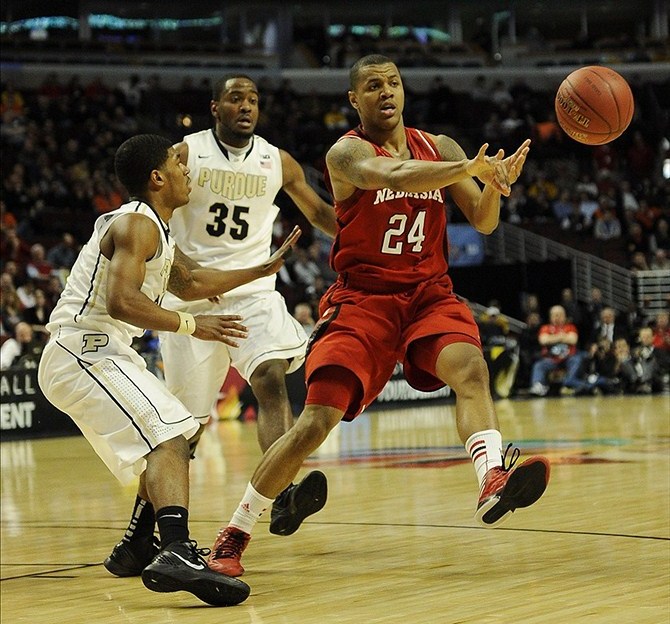 Shavon Shields scored 19 points, Brandon Ubel added 16 points and eight rebounds and Nebraska beat Purdue 57-55 Thursday in the first round of the Big Ten tournament. The Cornhuskers (15-17) hung on after Purdue's Terone Johnson missed two shots in the closing seconds and will meet No. 10 Ohio State in the quarterfinals on Friday.

FINAL: Shavon Shields scored 19 points and grabbed six rebounds and Brandon Ubel added 16 points and eight boards as they teamed up to lead Nebraska to a 57-55 victory over Purdue on Thursday at United Center in Chicago in the Big Ten Tourney.

Purdue (15-17) can look to its performance from the charity stripe as one of the factors in the loss, as the Boilermakers shot 50 percent (7-of-14) from the line. The Cornhuskers shared the ball to the tune of 14 assists on 21 baskets.

D.J. Byrd scored 15 points and yanked down eight rebounds for Purdue in the loss. The Boilermakers also got double-digit performances from Ronnie Johnson (10 points) and A.J. Hammons (11 points).

We have to keep battling out there! I don't think we could have scripted a better first half.

HALFTIME: Shavon Shields scored 15 points for Nebraska in the first half to carry the Cornhuskers to a 30-28 lead over Purdue. Both teams took turns controlling the momentum as there were seven lead changes.

The Boilermakers led 11-7 when Nebraska went on a 7-0 run to take a three-point lead. Purdue made 12 of 23 two-point shots in the first half, but shot 0-of-5 from beyond the arc.

The Boilermakers put the clamps on the Cornhuskers' three-point game (1-of-8, 13 percent from long range), while Nebraska shot 71 percent in the first half on two-point field goals. Ronnie Johnson helped Purdue with eight points.