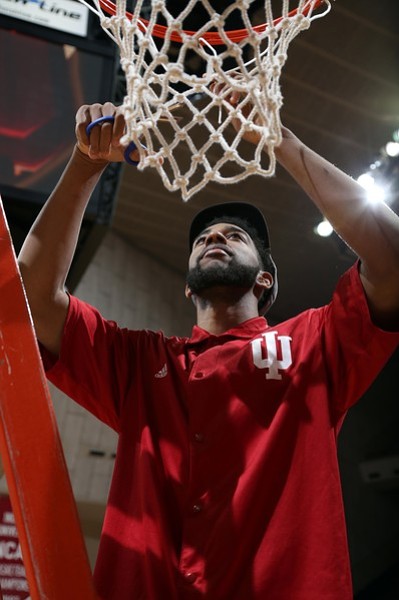 Dan Dakich has heard the drumbeat all season: The Big Ten is the nation?s best conference. And, he?s not going to argue that notion.

?It has been great,? said the former Indiana Hoosier (1981-85) and current Big Ten analyst for ESPN. ?So many good players, teams and coaches. And most of the games I have done have been spectacular.?

No doubt, it has been a spectacular regular season for the conference. Indiana opened as the No. 1 team in the nation. It slipped along the way but is poised for a No. 1 seed in the Midwest region in the NCAA tournament, which will start on March 21.

Michigan also took a turn at No. 1, with Michigan State, Ohio State, Minnesota and Illinois all having spent time ranked in the Top 10. Wisconsin also has been consistently ranked as one of the most surprising teams in the Big Ten this season.

How good and how deep is this league? Well, Michigan is No. 8 in this week?s coaches poll-and it is the No. 5 seed in the Big Ten tourney.

?This season, night in and night out, has been truly like nothing I ever have seen,? Dakich said. But how does this season rate compared to other Big Ten seasons? Any conversation about great recent Big Ten seasons begins with the 1988-89 and 1992-93 seasons.

?I think ?89 and ?93 were the most talented that I have seen,? said Dakich, who was an assistant at Indiana to Bob Knight from 1985-1997. ?We won the league (both years), but Iowa was loaded. And Illinois had all of its guys. Jimmy Jackson was at Ohio State. So many pros. In my time watching the league, those two seasons stick out for me.?

In 1988-89, Michigan and Illinois each advanced to the Final Four, with the Wolverines winning the national title. League champ Indiana lost to Seton Hall in the Sweet 16.

In 1992-93, Indiana reigned No. 1 for several weeks and went 17-1 in the Big Ten. Michigan and the Fab Five began the season ranked No. 1, losing the national championship game to North Carolina.

Those are high bars for this year?s Big Ten to reach for.

?In terms of where you would place it historically, I think the game is so different now as opposed to 15-20 years ago when guys stayed three or four years,? said ESPN analyst Stephen Bardo, who played on that Illinois ?Flyin? Illini? team that reached the 1989 Final Four. ?The Big Ten doesn?t have as many guys who go (pro) early. As a whole, the game is down, so I would be cautious to say this year?s Big Ten is one of the best ever only because the game is different. I don?t think they have quite the upperclassmen as some of those other years mentioned.?

Time will tell, but the Big Ten does possess some good players this season. Players like Trey Burke, Glenn Robinson III, Tim Hardaway, Jr., at Michigan; Cody Zeller and Victor Oladipo at Indiana; Deshaun Thomas and Aaron Craft at Ohio State; Brandon Paul at Illinois; Trevor Mbakwe at Minnesota; Gary Harris and Adreian Payne at Michigan State, among others.

Michigan State was the last Big Ten school to win a national crown, taking the title in 1999-2000. Twelve seasons have passed since Michigan State reigned. And since then, schools from the ACC (Duke, Maryland, North Carolina); Big East (Syracuse, UConn); SEC (Florida, Kentucky); Big 12 (Kansas) all have won national championships.

(Before MSU cut down the nets in 2000, the Big Ten went 11 seasons between national championships, with Michigan winning in 1988-89.)

What has been the reason for the Big Ten?s protracted drought since the Spartans cut down the nets in Indianapolis after beating Florida in 2000?

Indiana certainly has many legit NBA prospects this season.

?I don?t know if (Christian) Watford is a legitimate pro, but he has pro talent,? Dakich said. ?Zeller is a pro, Oladipo is a pro. Maybe (Will) Sheehey is a pro, but he has to play better. It seems to me when I see teams win national championships, a lot of the times the Big Ten doesn?t have those guys.? The Big Ten should get seven schools into the tourney this season: Illinois, Indiana, Michigan, Michigan State, Minnesota, Ohio State, and Wisconsin. Three of those-the Hoosiers; Wolverines and Spartans-should have legit chances to make it to the Final Four. But is there a dark horse?

?Ohio State could make a run to the Elite Eight,? Bardo said. ?When LaQuinton Ross and Amir Williams play strong, aggressive and look to score, that gives Ohio State a lot of depth. And they don?t have to rely heavily on Deshaun Thomas or Aaron Craft. Ohio State has all the weapons but just hasn?t been consistent on the offensive end because Thomas hasn?t had a lot of consistent help.?

For all the accolades the Big Ten has earned this season, it will mean little in the eyes of some if it fails to win big in the NCAA tourney. But would the season be considered a failure if the Big Ten fails to win a national title?

?I do,? Bardo said. ?You get the label of being the best in the regular season. But come tournament time, that?s when you really make your mark. You have to do your damage in March. It remains to be seen if Indiana, Michigan, Michigan State, Wisconsin, Ohio State can get to the Final Four and bring home a national championship.?

Dakich isn?t willing to label the season a failure if the Big Ten doesn?t win it all. But he can understand why some people would feel that way.

?I don?t know, but that?s what is seems like, right?? said Dakich, the head coach at Bowling Green from 1997-2007 who served as interim head coach at Indiana in 2008. ?I get the national perspective, and the national perspective is Final Fours and national championships. So, from a national standpoint, the Big Ten probably has to get a team or two in the Final Four. I think that?s the expectation based on the regular season. That?s not necessarily mine. I think it?s been an unbelievable season. The coach in me says the Big Ten regular-season title is huge. It?s so difficult to win. It?s really hard.?