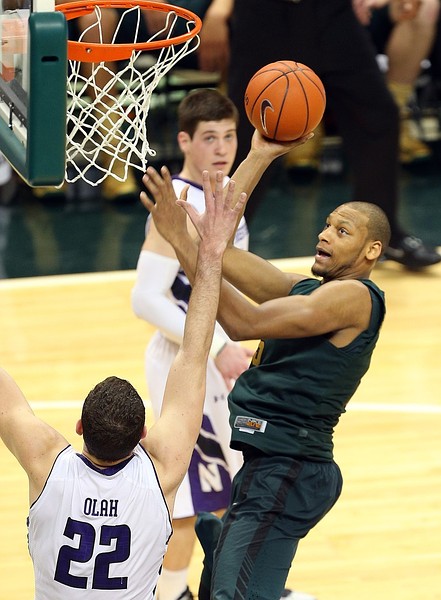 As we do every March, Josh and I take to a back-and-forth format to recap everything we saw in the regular season. Here's part one, covering our all-conference team and other thoughts on half the conference members.

Mike: It?s hard to believe we?re already done with the 2012-13 regular season, and what a season it was. There?s lots to discuss, but let?s start with a tradition unlike any other, the All-Geek team. Like everybody else, I've got the Obvious Four (Trey Burke, Cody Zeller, Victor Oladipo, Deshaun Thomas), then I'm a bit undecided on the last spot. I feel Andre Hollins, Trevor Mbakwe, Jared Berggren, Adreian Payne, Gary Harris, and Aaron Craft all could have an argument for inclusion.

Josh: Agree on the All-Geek team. Payne?s defense pushes him over the other candidates.

Speaking of defense, no one did it better than Wisconsin this season, largely thanks to Ryan Evans and Jared Berggren. That defense rewarded our faith in the Badgers, who just continue to keep rolling. Two questions for you–can this team make a deep run in March and get that monkey off of Bo?s back, and can Bo keep this thing going forever? At some point, the Badgers have to have a down year, right? Any chance that?s next season, with those defensive pillars gone?

Mike: I don?t think so. The Badgers will look very different next season, having to replace the entire front line of Berggren, Evans, and Mike Bruesewitz, but I don?t know that they will be worse for the wear. Josh Gasser will be back and top 100 point guard Bronson Koenig comes aboard, giving Wisconsin an incredibly deep backcourt, and Sam Dekker will become the focal point of the offense. Needless to say, that will be a big upgrade over the midrangey Evans, though the defense will suffer.

I?m expecting something akin to the 2010-11 Badgers, who paired the Big Ten?s best offense with a mediocre defense. We?ll go back to mocking analysts that use per-game stats to peg Wisconsin as a great defensive team, and the Badgers will once again finish in the upper half of the conference. Bo Ryan doesn?t do down years.

How about the other team that made us look smart, Michigan? Is John Beilein just incapable of putting a great defensive team on the court?

Josh: I?m really at a loss to explain Michigan. On the one hand, it?s the offense we all thought we?d see under Beilein, and for once it was sustained over the conference season. There were perhaps a few less three-pointers than one might expect, but the other aspects (low turnovers, high two-point accuracy) were there. This team still relies on ball screens and spreading the floor to get the defense out of position and unable to help.

But defensively, this was a relative trainwreck once conference play hit. Those gaudy defensive rebounding numbers fell apart in a big way, and that was the primary reason for the collapse on that end. And maybe we should have seen this coming-oh wait, we did. Beilein?s defenses are not well-known for their rebounding strength, and part of that is undoubtedly driven by his preference for having four shooters on the floor. A shooter that can rebound is a rare skillset, after all.

To that end, I think any change for next season is likely going to come from Glenn Robinson, III. The freshman is certainly athletic enough to grab rebounds, but he was a rather poor defensive rebounder in conference play. If he can improve on those numbers, Michigan?s defense may be credible enough to allow its offense to overwhelm opponents.

Speaking of defensive woes, what do you make of this Minnesota team? We were probably more skeptical about them than most, but it turns out we still weren?t skeptical enough. Is this team any different from the usual collection of impressive athletes with limited basketball skill?

Mike: You were quite prescient when it came to the Gophers, and I think I talked you into a better record projection for them. Just as you predicted, it was the defense that held Minnesota back, and the numbers look strikingly similar to those of the entire Tubby Smith era. The Gophers blocked a lot of shots and did well defending twos, but they got killed by three-pointers and fouled too often. It was the same old story, and even the best Minnesota offense of the tempo-free era couldn?t produce a winning Big Ten record.

That said, the Gophers did put up a positive efficiency margin against arguably the best Big Ten of recent memory, so it?s not all doom and gloom if we can step back from the ugly finish to the season. Minnesota could very well make a Sweet Sixteen run if it gets the right matchups, and the loss of Mbakwe might not be felt next season as much as you?d think (given Tubby?s tendency to put the same defense on the floor regardless of personnel). It?s been a disappointing conference season for the Gophers, but tournament runs have a way of overshadowing all that came before.

How about the team that came from very different expectations to also finish 8-10, the Fighting Illini? Should it really be considered a surprise for Illinois to (presumably) make the NCAA tournament?

Josh: I don?t think it?s a surprise that they got there, but how they got there was unusual. On the former point, this is a team that was loaded with sophomores and brought back most of the production from an-albeit under-performing-not-terrible team. The presence of sophomores continues to be the driving force behind year-over-year turnarounds, and this year?s Illini team is no different.

But that said, you typically don?t expect the same team that beats Indiana to lose to a woeful Northwestern team, at home. Indeed, it seems like the new staff needed some time to get acclimated to conference play. What I do find interesting about Illinois is the power of the Perimeter Oriented Team. This is a team that is terrible at shooting three-pointers, but all it does it shoot three-pointers. You would expect that a team insisting on specializing on the one thing it does terribly would suffer disastrous consequences of that stubborness, but Illinois ranks as an average Big Ten team, offensively. Behold the power of low turnovers.

This is a good sign for the future. I mean, if the offense can be average with terrible shooters, imagine how good it can be once Groce finds players that can throw the ball in the vicinity of the basket. The defense, however, is still a work in progress. Stay tuned.

What about Michigan State? For a team that nearly came up with a share of the title, it seemed to stay firmly below the radar. Is my radar off, or was this a weirdly quiet year in East Lansing?

Mike: I?d agree with that, and I?m assuming the lack of Spartan hype is a byproduct of all the attention heaped on Indiana and Michigan, what with those teams taking turns atop the national rankings. It feels like the same phenomenon kept Ohio State under the radar too. I suppose it?s the curse of having such a ridiculously strong conference.

Back to Michigan State, it?s remarkable to lose a player the caliber of Draymond Green and win just as many Big Ten games. It?s not like Tom Izzo is doing this with scrubs–all five starters were top 100 recruits–but you wouldn?t expect to lose a guy like that and basically be a statistical carbon copy of last season?s team. The scary thing is that the Spartans could be even better next season if they aren?t hit by early departures. Only Derrick Nix graduates, and Denzel Valentine looks like he could be a beast as early as next season. The early entry decision of Gary Harris seems to be the only thing standing between Michigan State and a top five preseason ranking this November.

While we?re on the topic of shrugging off the loss of elite players, how in the world did Thad Matta match last season?s record after losing Jared Sullinger and William Buford? Unlike Izzo, he didn?t even add an impact freshman. What gives?

Josh: Well, I think a caveat is in order. Last year Ohio State posted a 13-5 record in the Big Ten with a +0.16 efficiency margin. This year?s iteration managed just half of that. Last year?s team was undoubtedly much better than its already-impressive record. I mean, this year?s team was actually blown out a couple of times during the conference season, and that?s something that never really happened to Ohio State as long as Jared Sullinger was in uniform.

Still, that isn?t to say that Ohio State hasn?t surprised this year. Last year?s defense was led by the aforementioned rebounding monster Sullinger, which figured to leave a massive void defensively. And I guess there was a void, technically, but I doubt anyone noticed that much. Last year?s Buckeye team was the best in the conference in defensive rebounding-this year?s team is 2nd. Overall, this is still the 2nd-best defense in the Big Ten, just as it was last season.

I thought that if Sullinger?s absence was going to be accounted for, it would be the promising sophomore Amir Williams that would provide the defensive punch. And while Williams? defense has been excellent, he?s no Sullinger. Instead, it?s been a group effort, spearheaded by Shannon Scott. Consider that Scott has averaged just 20 minutes a game in the Big Ten season, and he ranks 6th in the conference in steals (all behind guys who play over 30 minutes a game). And despite standing just 6-1, he?s blocked 8 shots in the Big Ten season. I mean, that?s just one fewer block than Ryan Evans has (and Evans is a really good defender). I can?t say enough good things about Scott?s defense.

What do you think about the job Tim Miles has done this year? Is there any reason to think that any of the current Cornhuskers will play an NCAA Tournament game before they exhaust their eligibility?

Stay tuned for part two of our season-recapping back-and-forth.