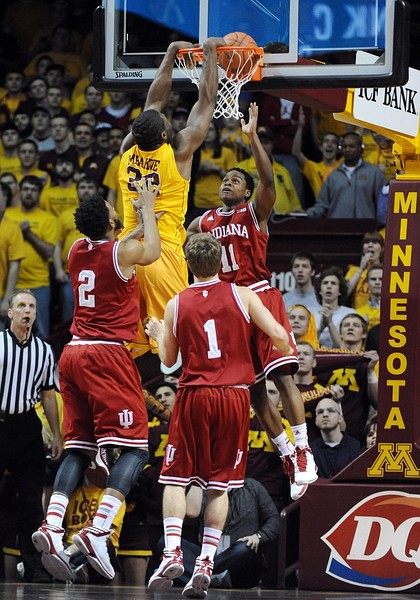 Putting together a list of the top 10 games of the 2013 Big Ten season is like asking a parent to pick their favorite child. It?s impossible to do. But, I have attempted to select the best of the best from a regular season that left fans in a heap of exhaustion from an overdose of excitement and exhilaration. This truly was one of the Big Ten?s best seasons in more than 20 years-and it isn?t over yet!

10. Indiana 81, Michigan 73, Feb. 2. Fueled by Cody Zeller?s 19 points and 10 rebounds and Victor Oladipo?s 15 points, the No. 3 Hoosiers downed No. 1 Michigan in Bloomington. The win propelled Indiana back to No. 1 in the polls. More than anything, this victory seemed to assert Indiana as the top team in the Big Ten.

9. Wisconsin 64, Indiana 59, Jan. 15. The Badgers? hex on the Hoosiers continued. This victory at Indiana was Wisconsin?s 11th consecutive win in this series, matching the second-longest streak of any school Indiana has played. The Badgers also won 11 straight over Indiana from 1912-19, and Purdue won 12 straight from 1908-14. Want more? The Badgers are the first team since 1923 to win a fifth consecutive game in Bloomington, matching a record achieved only three other times, most recently by Purdue, and they still have not lost to Indiana coach Tom Crean since he arrived in Bloomington in 2008.

8. Michigan 76, Ohio State 74, Feb. 5. These schools' iconic football rivalry also has a lot of juice on the hardwood. This overtime thriller was proof in the first top-10 meeting between Michigan and Ohio State. The end was dramatic, as Tim Hardaway, Jr., of No. 3 Michigan, blocked Ohio State?s Aaron Craft shot on the final play of the game to preserve the victory over the No. 10 Buckeyes. It was fitting that Hardaway made a key play at the end, as he kept the Wolverines in this one with a litany of three-pointers en route to tallying 23 points.

7. Indiana 72, Michigan State 68, Feb. 19. This was one of the Hoosiers? finest hours, as they waded into East Lansing and left with their first win since 1991-a string of 17 losses in a row at Michigan State. Credit Victor Oladipo, whose full array of skills was on display in this win over No. 4 Michigan State. In the final minute, the junior hit the go-ahead put-back dunk and free throws to finish with 19 points, nine rebounds, five steals and a block. It was simply a stunning effort, and it all came on a bum ankle he had twisted in the previous game.

6. Minnesota 77, Indiana 73, Feb. 26. Led by Trevor Mbakwe, the Golden Gophers muscled up on the No. 1 Hoosiers in one of the biggest upsets of the season. Minnesota entered the game listing, having lost eight of 11 games and slipping onto the NCAA bubble. But Mbakwe notched 21 points and 12 boards to dominate Cody Zeller (nine points; four turnovers) in Williams Arena.

5. Michigan 58, Michigan State 57, March 3. This was Trey Burke at his best, lunging in and stealing the ball from Keith Appling and going in for the game-winning dunk with 22 seconds left. Burke, who finished with 21 points and eight assists, sealed the victory by stealing a Gary Harris pass with 4.9 seconds left, much to the delight of the Ann Arbor crowd.

4. Wisconsin 65, Michigan 62, OT, Feb. 9. This one had the nation buzzing after the Badgers? Ben Brust drilled a shot from just inside midcourt as the buzzer sounded to force overtime. Wisconsin took over from there, downing the No. 3 Wolverines who thought they had it won in regulation after Tim Hardaway, Jr., nailed a three-pointer with less than three seconds left to put Michigan up, 60-57, in Madison.

3. Illinois 74, Indiana 72, Feb. 7. The Illini?s Tyler Griffey capped this thriller by hitting a game-winning layup following an inbounds pass with 0.9 seconds left to knock off No. 1 Indiana. The stunning win in Champaign ended a horrible stretch for Illinois, which had lost eight of 11 games and trailed this game, 41-29, at halftime.

2. Penn State 84, Michigan 78, Feb. 27. The Nittany Lions authored the upset of the year with this stunner, roaring back from 15 points down to the No. 4 Wolverines to notch their first Big Ten win after opening 0-14 in the conference. It was Penn State's first victory over a top-five team since downing No. 5 North Carolina, 82-74, in the second round of the 2001 NCAA tourney, and the highest-ranked foe that the Nittany Lions had beaten since moving to the Bryce Jordan Center in 1996.

1. Indiana 72, Michigan 71, March 10. The Big Ten saved the best for last. This game became an instant classic the moment Jordan Morgan?s potential game-winning putback spun out of the cylinder and the final buzzer sounded. The Wolverines inexplicably blew a five-point lead with 52 seconds left at home on Senior Day, costing themselves, Ohio State and Michigan State a share of the Big Ten title. Missed free throws and monster plays by Indiana?s Cody Zeller-who finished with 25 points–during the last heart-stopping minute led the Hoosiers to their first outright Big Ten title since 1992-93. In the process, IU likely sewed up the No. 1 overall seed in the NCAA tournament. Whew!