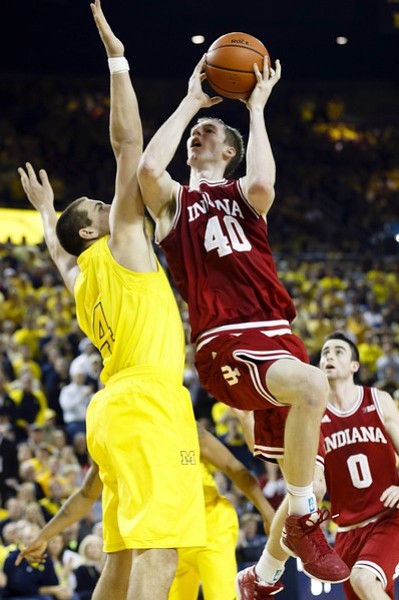 Indiana won the Big Ten championship outright by about half a Newton, as Jordan Morgan?s tip-in attempt was a hair too strong, allowing Indiana to complete a road comeback and dulling the festivities of the rest of the weekend. After a sluggish first half that ended with Michigan leading 33-30 (33 possessions), the two teams combined for 80 points in the second half (32 possessions). However, despite the fact that these two teams played a back-and-forth battle, I think the result raises more concerns about Michigan than Indiana.

Don?t get me wrong-this game was literally decided by the bounce of a ball. Even if Morgan?s shot went down, I think I?d still have some worry about the Wolverines. This team was the best defensive rebounding team in the nation over the non-conference portion of the schedule, but coming into this game, it ranked just 5th in defensive rebounding percentage in Big Ten play (now 8th). On Sunday, Indiana feasted on offensive rebounds, recovering an astounding 57 percent of its misses. Overall, Michigan has been let down by its defense over the back half of the schedule time and time again. Consider just how much went right for the Wolverines on Sunday: they turned it over on fewer than 10 percent of their possessions; they made 46 percent of their three-point attempts; they completely took away Indiana?s primary offensive weapon by allowing just 9 free throw attempts; and the Hoosiers shot a mere 42 percent on two-pointers. Given all of those facts, this should have been a 10-point win for Michigan. But it wasn?t, because Big Blue could end Indiana's possessions.

Of course, Michigan did not help itself by missing 3 of 4 free throws in the final minute, and then by allowing Indiana to score every time down the floor. No one played bigger in the final minute than Cody Zeller, who finished with 25 points and 10 rebounds, although his line was blemished a bit with 6 turnovers. Trey Burke led Michigan with 20 points, but it took 20 shots to get there and he paired it with a pedestrian 4 assist, 4 turnover effort. Both of these guys clearly wanted the ball in the last game of the season: Zeller consumed 40 percent of Indiana?s possessions while he was on the floor, while Burke was at 37 percent.

A congratulations are in order for your 2013 Big Ten Champions, the Indiana Hoosiers, who won the Big Ten record with a record of 14-4, just like we said they would (thanks for nothing, Minnesota). This Hoosier team is definitely capable of winning the whole thing in large part because of a vastly improved defense. However, the one item I?m most impressed with was Indiana?s ability to shoot over 40 percent from 3 for a second consecutive season. This is the first time a power conference team has ever done that in the tempo-free era (the closest thing you?ll find is Notre Dame?s continued flirtation with this feat from 2005-11).

Traevon Jackson added to his collection of big shots when his 35-foot heave secured a win for Wisconsin at Penn State. The Nittany Lions have played extremely tough over the past few games, and this team might not be an easy out in Chicago. Before taking down Michigan, PSU suffered single digit losses to Iowa, Michigan, and Illinois-and two of those games were on the road. While the wheels fell off at Minnesota, it?s clear that Pat Chambers? team is starting to play much better basketball.

Indeed, this is the 5th time in the past 7 games that Penn State has eclipsed the 1.0 point per possession threshold. Up to that point, the Nittany Lions had only hit that mark once in 11 Big Ten games. Jermaine Marshall in particular has been on a tear over that stretch, scoring 127 points over those 7 games (he had 23 in the loss to Wisconsin). Not only is he Penn State?s best player at this point, but he might play himself onto the All Big Ten 3rd team. Now, Penn State?s frontcourt needs a lot of work, but this should be one of the better backcourts in the country next season.

Minnesota ended its regular season with a whimper, as the Gophers were thoroughly dominated by Purdue. The 89 points scored by the Boilermakers were the most Matt Painter?s team has scored since November 2011. Just about everything was working for the Purdue offense, as it rung up Tubby?s team to the tune of 1.3 points per possession.

The outcome moves the two teams into a tie in the standings, although that bottom-line assessment does not fully account for the relative strength of these two teams. Minnesota has, after all, (narrowly) outscored its Big Ten opponents, while Purdue finishes with a cumulative deficit of 70 points. Still, one has to be impressed with what Matt Painter has done with this team. While this team almost surely will fall short of the NIT, this was a very young roster Painter molded into a team capable of pulling off 8 Big Ten wins. Remember, this Boiler team was losing to the likes of Eastern Michigan and Oregon State in the non-conference portion of the schedule. As Painter?s freshmen become sophomores, this team figures to improve substantially, and I think Painter?s significantly moved the baseline position of that improvement for next year.

Minnesota, meanwhile, is trending in the opposite direction. Remember, this team was once 15-1, and just about all of those wins were not that competitive. As it is, this team might be in the Tournament because of Mike Bruesewitz?s brain lapse (Which happened again on Sunday. We're coming to a point where failing to executing an inbounds pass can be shortened to the verb "Bruesewitzing.") that allowed Minnesota to take the Badgers to overtime (where they ultimately won). That said, a deep Tournament run heals all wounds. Maybe this is a Minnesota team that?s ill-equipped to play in the Big Ten, one that would fare much better against non-conference opponents. Hey, there?s a chance, right?

But to get anywhere in the Tournament, the Gophers need to work on their perimeter defense. They are, without qualification, the worst perimeter defensive team in the conference, allowing not only a league-high opponent three-point percentage, but also allowing a league-high attempts (as a proportion of field goal attempts). Put it another way, not only are opponents tripping over themselves to shoot threes against Minnesota, they are not being penalized for that long-range aggressiveness with any corresponding accuracy hit.

Iowa dispatched of Nebraska in the kind of game I expected to see more of this season from the Hawkeyes. Both teams were well over a point per possession, and frankly, I figured offense would be the strong point for this Iowa team. But it hasn?t turned out that way, as Frank McCaffrey?s squad finishes the regular season averaging under a point per possession in conference play. Surprisingly, defense has been a relative strength for the Hawkeyes. Much of the credit for that belongs to Melsahn Basabe, whose re-emergence this season has made Iowa?s interior defense on the right side of ?respectable.? Last year, Big Ten opponents shot 53 percent on twos against this Hawkeyes. This season, that number is down to 45 percent.

The improved interior was on display on Saturday, as the Cornhuskers were held to 35 percent shooting on twos. Offensively, Aaron White continued to excel, with 19 points on just 7 shots. Ray Gallegos led Nebraska with 22 points on 15 shots, and just one turnover.

Michigan State held off Northwestern on Senior Day thanks to a big game from Keith Appling (16 points, 8 shots, 2 turnovers). The junior point guard has had a very rough season to date, completely disappearing in several big games. But he?s finishing the season on a strong note, with two noteworthy performances. If he?s playing like he?s capable, State is an entirely different team. Though I wonder how much his conversion to a point guard over the past two seasons has changed him as an offensive threat. As a recruit, he was known mostly as an excellent outside shooter. Indeed, as a freshman Appling made over 40 percent of his three-point attempts (and his 89 percent free throw shooting suggested that it was not a fluke).

But over the last two seasons, Appling has made just under 28 percent of his three-point attempts, and his free throw percentage is down as well (77 percent). Now, it?s very plausible that Appling?s accuracy has declined as he?s attempted more shots, but I can?t help but wonder if playing out of position has his offensive game out of whack as well.

Finally, Ohio State took care of business at home against Illinois, thanks to some solid work by the supporting cast of Lenzelle Smith and Aaron Craft, who combined to score 24 points. That, couple with the reliably-efficient Deshaun Thomas (19 points, 13 shots) and the Buckeyes? usual excellent defense (Illinois was held to under 0.90 points per possession) was more than enough to dispatch of the Illini. At this point, I think we all know what to expect with Illini-the team shoots threes with reckless abandon, whether they go in or not. When this team makes threes-and when it keeps the turnovers low, it?s a very tough team to beat. When they don?t, they?re probably something more like a mid-level NIT team.

Well, that puts an end to the regular season, but fear not-Mike and I will check back in later this week to hand out our Player of the Year, Defensive Player of the Year, and All-Geek Team, and we?ll offer up some more predictions for the rest of March.