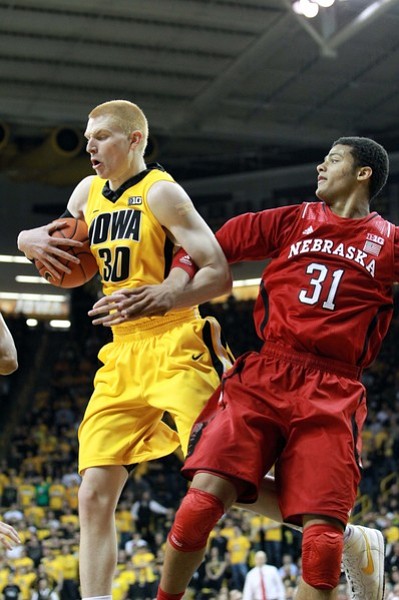 Aaron White led a balanced effort with 19 points and Iowa beat Nebraska 74-60 in its regular-season finale on Saturday, finishing at .500 in the Big Ten for the first time in six years. Freshman Adam Woodbury added 12 points and Melsahn Basabe registered an 11-point, 13-rebound double-double for the Hawkeyes (20-11, 9-9), who clinched the No. 6 seed in next week's Big Ten tournament.

Iowa, which broke the game open with a 20-2 run midway through the second half, will open conference tourney play against Northwestern on Thursday.

Iowa's Devyn Marble scored his 1,000th point on Saturday, joining his father Roy Marble as the only father/son duo in Big Ten history to do so.

Iowa honored its seniors prior to the game:

Aaron White gets third dunk of the game:

Aaron White hammers one down:

FINAL: Aaron White scored 19 points, grabbed six rebounds and handed out three assists as Iowa defeated Nebraska 74-60 on Saturday at Carver-Hawkeye Arena in Iowa City. Melsahn Basabe had a huge game, as well, with an 11-point, 13-rebound double-double, while Adam Woodbury hit all six of his shots for 12 points. Iowa hit 57 percent of its field goals (28-of-49) and still grabbed 12 offensive rebounds. Ray Gallegos contributed 22 points and pulled down three rebounds for Nebraska (14-17) in a losing effort. The Cornhuskers had trouble finding their touch, shooting just 38 percent (21-of-56) from the field.

HALFTIME: Adam Woodbury scored eight points and grabbed three rebounds and Melsahn Basabe added five and eight to help lead Iowa to a 32-23 halftime lead over Nebraska. Iowa, which dominated the glass (24-12), never trailed in the first half and led by as many as nine points. Devyn Marble, Iowa's leading scorer, has been held to three points. He did, however, join the 1,000-point club in the first half. Iowa applied the pressure in the first half, earning second-chance opportunities with nine offensive rebounds, to just five for the Cornhuskers. The Hawkeyes shared the ball, finishing with nine assists on 12 field goals in the first half. Ray Gallegos paces the Huskers with nine points on three 3-pointers.