Purdue rolls to 89-73 win over Minnesota 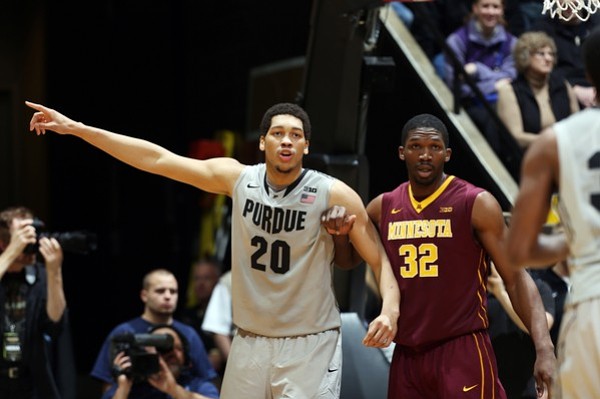 D.J. Byrd and Rapheal Davis each scored 18 points as Purdue rolled past Minnesota 89-73 on Saturday. The Boilermakers (15-16, 8-10) won for only the third time in seven games as they head into next week's Big Ten tournament.

For Minnesota (20-11, 8-10), it was another dreadful day on the road. Forward Trevor Mbakwe got into early foul trouble and the Golden Gophers looked flat as they fell into an early 15-point deficit. They never recovered.

A.J. Hammons throws it down:

FINAL: D.J. Byrd scored 18 points and grabbed seven rebounds and A.J. Hammons added 14 points and six boards to lead Purdue to an 89-73 victory over Minnesota on Saturday at Mackey Arena in West Lafayette. Andre Hollins did everything possible to prevent a loss for Minnesota (20-11), with 24 points, four rebounds and nine assists. Purdue (15-16) hit 54 percent of its field goals (32-of-59) and also got double-digit contributions from Rapheal Davis (18 points), Ronnie Johnson (14) and Terone Johnson (12). Rodney Williams Jr. was 4-of-5 from the floor and chipped in 13 points for the Golden Gophers, who had 17 assists on 26 baskets. Minnesota also got solid contributions from Joe Coleman (10 points) and Austin Hollins (12 points).

HALFTIME: Purdue used the stellar combination of D.J. Byrd and A.J. Hammons to claim a 44-27 halftime advantage over Minnesota. Byrd scored 11 points, grabbed three rebounds, and shot 3-of-5 from the field, while Hammons scored eight points, grabbed four rebounds, and shot 4-of-4 from the field. Purdue, which owns 1 25-16 rebounding edge, led by as many as 21 points and didn't trail once in the first half. After already giving up eight offensive rebounds to Purdue, the Golden Gophers will have to keep the Boilermakers off the boards in the second half. Purdue played team basketball in the first half, to the tune of 12 assists on 18 field goals. Purdue got points from seven different players. Andre Hollins scored seven points to lead the Gophers, who also received six points from Austin Hollins and Rodney Williams.