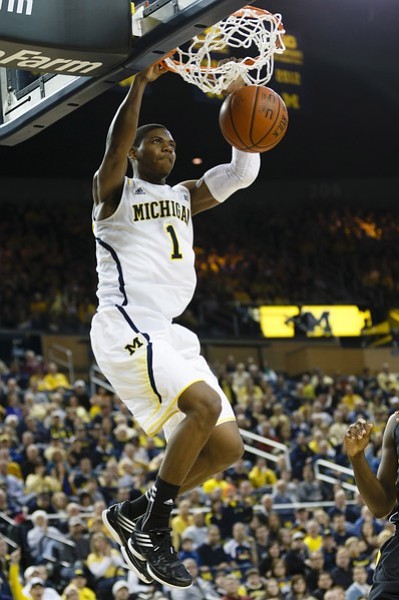 The Big Ten title chase cleared up a bit last night with Michigan State dumping Wisconsin, 58-43, in one of the ugliest games of the season.

The Badgers offense was hard on the eyes–again. Including the 13-point loss to Purdue on Sunday, Wisconsin has hit 10 of 50 three-pointers (20 percent) and 37 of its last 105 shots overall (35.2 percent).

The Spartans can claim a share of the Big Ten title with a home win over Northwestern on Sunday along with a Michigan victory over Indiana in Ann Arbor on the same day. The defeat means the Badgers are in peril of having to play in the opening round of the Big Ten tourney. But Wisconsin can still grab a No. 4 seed and a first-round bye with a victory at Penn State and a Michigan loss to Indiana.

No one will be shocked if Michigan sophomore Trey Burke goes pro. He is a man among boys in college hoops. Like Burke, Glenn Robinson III is projected as a first-round pick. But ESPN.com?s Chad Ford feels the freshman would be smart to come back to Ann Arbor.

"(He's a first-round pick), but as an upside guy," Ford wrote during an NBA draft chat Wednesday. "He really should return and continue to polish his game next season."

Speaking of Michigan, turns out Jalen Rose pushed Trey Burke into returning for his sophomore season. Yet another reason to like Jalen. As if you needed another.

If the great Sid Hartman of the Minneapolis Star-Tribune says it?s so, then it is so: Minnesota?s loss on Wednesday at Nebraska was painful. But the Golden Gophers still can net the No. 6 seed in the Big Ten tourney with a win at Purdue on Saturday. But a loss could cause Minnesota to tumble to the No. 8 seed.

Keys to victory in West Lafayette, according to Hartman: Shooting better from the free-throw line-Minnesota made just 10 of 20 freebies vs. Nebraska. And getting production from Rodney Williams, who didn?t score a point vs. Nebraska.

A personal foul on a defenseless player next season will result in a 15-yard penalty and ejection from the game.

I?m not a fan of this for many reasons. Ejection is much too harsh. And also, as Marc Morehouse of the Cedar Rapids Gazette points out: What is a defenseless player? Also, what is malicious contact? There is subjectivity here. The ?you know it when you see it? makes sense in theory, but you can?t write that in a rule book with a straight face.

Look, I?m all for safety. Who isn?t? But football is a dangerous sport, just like riding a motorcycle. There is inherent risk in both activities. People who play football or ride motorcycles know that. It?s just about impossible to make either activity totally safe. Here?s an idea: If you don?t wanna play, don?t play. If you wanna play, well, you know the risks.

Devin Gardner is ready to assume command of the Michigan offense after what he called a ?tough? wait behind Denard Robinson.

I, for one, am glad Gardner stuck it out. When he finally got his shot in the final five games of 2012, after Robinson injured his elbow, Gardner excelled, proving to be a dual threat. The guy is gonna be good.

The Big Ten could be in store for a bowl shakeup. Again, Morehouse of the Cedar Rapids Gazette says the next cycle of Big Ten bowls is a year away: 2014-17. Some possible additions are the Holiday Bowl in San Diego and the Pinstripe Bowl in New York.

As Morehouse points out, it just makes little sense to play three bowl games on the same day in the same state, which is the case for the Big Ten on Jan. 1 with the Capital One, Outback and Gator Bowls all taking place in Florida.

Penn State coach Bill O?Brien is telling his players to watch what they do on social media. The NFL is watching-and reading. Maybe even re-Tweeting. No, not that. And who are the top tweeters on the Penn State team?

Many feel this is a critical spring for Ohio State junior linebacker Curtis Grant, who has failed to live up to his five-star hype since arriving in Columbus. It?s time to step up.

Heck, Grant basically admitted as much recently after a spring practice, saying "You either man up or get out. So, it's pretty straight forward. So, I manned up so I can come out here and help out."

A Buckeye whose spot on the team is secure is Jordan Hall, who is moving from running back to slot. In this video, Doug Lesmerises of the Cleveland Plain Dealer says Hall is poised to have a big spring.

Ohio State hopes Hall excels after injury ruined his 2012 season. Could Hall be a Percy Harvin-type of player for the Buckeyes? Hmmmm. Playmakers are needed on this offense.

Mich State playing like it's March and they're Mich State

My take: It was about time. Michigan State needed that after losing three games in a row.

Tom Izzo says tonight was worth it for two reasons. One, getting the win. "Two, seeing Keith smile."

My take: No doubt, getting Keith Appling back on track is huge with the tourney just around the corner.

Penn State picks up its first road conference win under Chambers without a single bench point.

My take: This is amazing-on both fronts.

This is the sixth time Wisconsin has scored in the 40s in Big Ten play, and it scored 53 in an overtime game. That's with a shot clock.

My take: Defense and protecting the ball are great. But there comes a time when you have to score.

Wisconsin b-ball player Mike Bruesewitz looks like he's related to both Art Garfunkel and Ralph Malph with his new look. Good player, too.

My take: This should make you laugh out loud. It did for me.

When Wisconsin makes shots, as it did for a couple weeks, it's very good. When it doesn't, it's tonight.

My take: My eyes are still aching.

I really have a feeling IU, MSU, OSU and Michigan are going to share the Big Ten title at 13-5. MSU and OSU have NW and Illini at home.

My take: I think Washburn is correct.