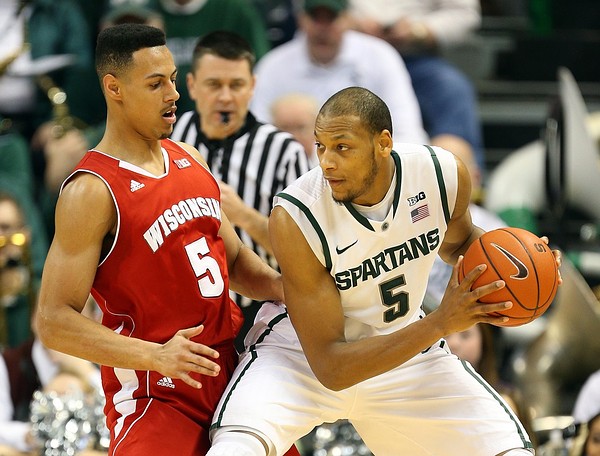 Michigan State?s 58-43 win over Wisconsin clears up the Big Ten title chase-a little bit. The Spartans? victory eliminates the Badgers from being able to win a share of the Big Ten championship. Michigan State?s triumph also clinches the No. 1 seed in the Big Ten tournament for Indiana. The event starts next Thursday in Chicago.

Now, all eyes will be on Ann Arbor, Mich., where Indiana plays Michigan at 4 p.m. ET. Win or lose, the Hoosiers already have a share of their first conference championship since 2001-02. A victory by the Hoosiers will clinch Indiana?s first outright Big Ten title since 1992-93.

A loss by Indiana would give the Wolverines a share of the league championship for a second season in a row. The last time Michigan won two Big Ten titles in a row was the 1984-85 and 1985-86 seasons.

A loss by the Hoosiers also would allow Ohio State and Michigan State to earn shares of the Big Ten title if they close with wins on Sunday. The Buckeyes play host to Illinois 12:30 p.m. ET while the Spartans welcome Northwestern at 6 p.m. ET.

The last time there was a four-way tie in the Big Ten? The 2001-02 season, when Illinois, Indiana, Wisconsin and Ohio State each garnered a piece of the hardware, though the Buckeyes later had to vacate their share due to NCAA sanctions. The four-way tie before that was in the 1925-26 season, when Indiana, Iowa, Michigan and Purdue shared the crown.