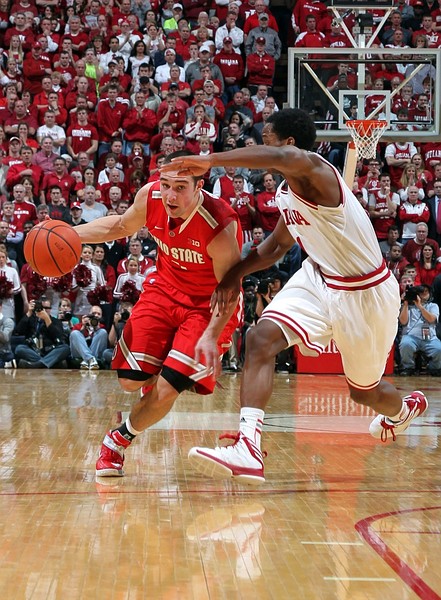 Ohio State shook up the Big Ten title race with an impressive victory at Indiana. This one was all about the Buckeyes' defense, spearheaded by Aaron Craft and Shannon Scott, as they held the Hoosiers to their second-lowest output of the season (Indiana actually scored slightly worse in the win at Iowa, albeit in a lot more possessions).

The lifeblood of the Hoosiers' offense–frequent trips to the foul line–was cut off by the foul-averse defense we've come to expect from Thad Matta's teams, and Indiana shot a lowly 39 percent on twos to boot (thanks in no small part to Ohio State's seven blocks).

Craft and Scott combined for eight steals, seven defensive rebounds, and just one foul, not to mention their contributions on the offensive end (a combined 23 points, seven assists, and two turnovers). The Buckeyes are clearly at their best with both of their point guards on the floor.

We'd be remiss to leave out Deshaun Thomas, who had another day at the office with 18 points, eight rebounds, and no turnovers. Thomas didn't have his best shooting night (5-for-14 on twos), but his ability to consume possessions without turning it over allows him to stay efficient without great accuracy.

This results opens the door for a four-way tie for the Big Ten title, all dependent on Michigan beating Indiana in Ann Arbor this Sunday. Should that happen (absent other upsets), the title will be shared among Indiana, Michigan, Ohio State, and the winner of Thursday's Michigan State/Wisconsin game. The Wolverines have to be kicking themselves even more over that Penn State loss, as they'd otherwise now be in a position to grab the title outright.

For Indiana, the bigger story than the possible loss of an outright title is the possible loss of the #1 seed in the Midwest, which would have the Hoosiers playing their Sweet Sixteen and Elite Eight games in Indianapolis. That door seemingly isn't slammed shut, but Indiana would do well to win at Michigan and have a good showing in the Big Ten tournament.

Ohio State has arguably done more than anybody over the past two weeks to bolster its resume, with this win obviously being the big prize. The Buckeyes are now looking at a protected seed, making the path to the Sweet Sixteen a bit more hospitable. It seems like the Big Ten has no shortage of candidates for the award, but Thad Matta deserves some consideration for coach of the year considering the firepower lost from last season's squad.

Elsewhere, Iowa racked up another ugly but important win in its quest to return to the NCAA tournament. This time, it was Illinois on the short end, as the Illini were held to a season-worst 0.82 points per possession. Illinois had its worst shooting night of the season, driven by Iowa's 12 blocked shots (tying a school record). Gabe Olaseni swatted six shots in just 19 minutes of court time. Roy Devyn Marble and Josh Oglesby provided much of the offense–Marble scored 21 points on just 12 field goal attempts, and Oglesby broke out of a long slump with two huge threes down the stretch.

Iowa still isn't in great shape for an at-large bid, but this win was absolutely necessary to that cause. The Hawkeyes need to take care of business against Nebraska this Saturday then probably need to reach the semifinals of the Big Ten tournament to have a chance. Needless to say, that won't be easy, but Iowa's hopes remain alive.

For Illinois, this was a disappointing effort, but it changes little other than seeding. With this season's bubble, the Illini's overall resume is just too strong to leave out, even with an expected loss at Ohio State this Sunday. Brandon Paul was alone in having a good offensive game, finishing with 18 points, nine rebounds, and three assists.

Tonight, it's the final Wednesday BTN doubleheader of the season, starting with what could be a trap game for Michigan at Purdue. Obviously, Sunday's huge matchup with Indiana could have the Wolverines overlooking the Boilermakers, who just pulled off an upset at Wisconsin. The nightcap has Minnesota visiting Nebraska, where the Huskers have been fairly tough. Only one conference visitor has left Lincoln with a double-digit victory, so don't be surprised to see another grinder on Senior Night for Dylan Talley, Brandon Ubel, and Andre Almeida.