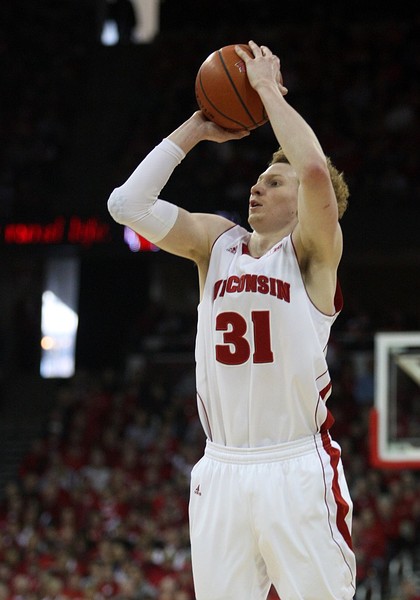 After this weekend?s terrible display of inaccuracy from beyond 20 feet, it occurred to me that this year?s Big Ten seems to be missing more shots than ever. Sure enough, one look at Kenpom confirmed what my eyes were suggesting: 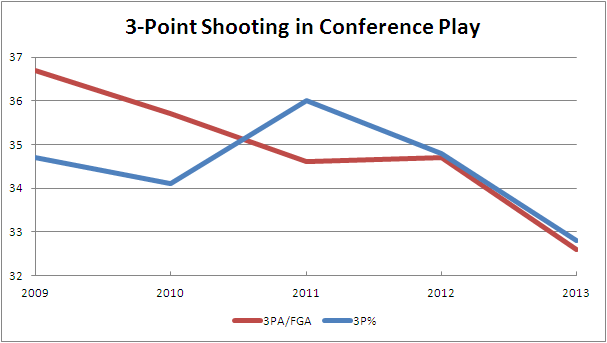 Remember, 2009 was the first season with the moved-back three-point line. Ever since that season, we?ve seen a drastic scaling back of the number of three-point attempts. This makes some sense-as the shot becomes more difficult (and coaches start seeing those results), offenses adjust to that decreased payoff per three-point attempt. And that does seem to match up with the rest of Division I, at least initially: 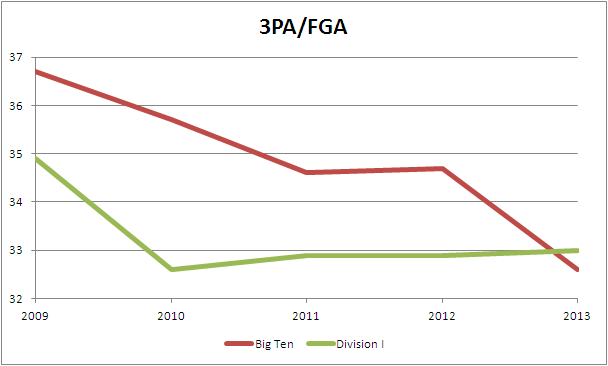 Just like the Big Ten, the rest of Division I quickly scaled back its outside shooting in light of the new three-point line. But unlike the Big Ten, the rest of college basketball has been steadily increasing the number of three-point attempts since it bottomed out in 2010. Surely then, the rest of Division I has paid an accuracy penalty for its willingness to shoot threes (in a relative sense. The Big Ten has better players than the average Division I team, so we should expect that Big Ten teams are capable of taking and making more threes. What we?re looking for is the trend). 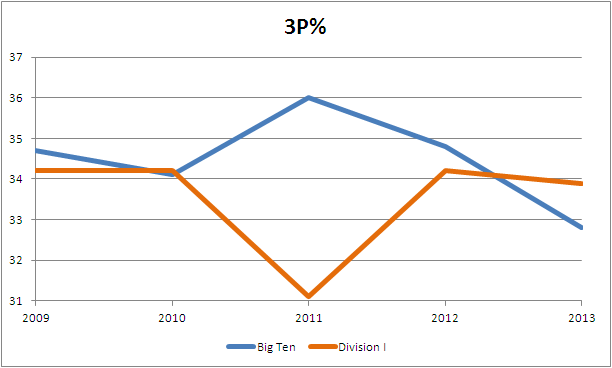 I guess not. With the exception of a bottoming-out in 2011, the rest of Division I has been remarkably stable in its three-point percentage.

To recap, the Big Ten is suffering its worst three-point shooting season since the line was moved back in 2009, and the worst overall since 2003 (which had remarkably similar numbers to this season?s Big Ten). But the question I have is whether this is driven by poorer-shooting offenses, or perimeter-obsessed defenses. While it?s convenient to look at the dismal shooting put forward by teams like Iowa and Penn State, keep in mind that coaches have become more focused on denying three-point attempts (Bo Ryan and Matt Painter make this a cornerstone of their defenses).