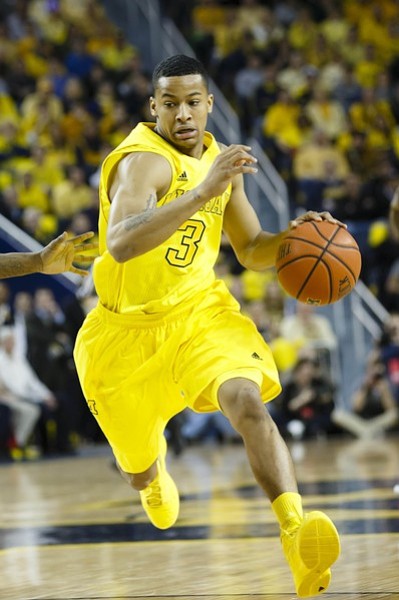 It was a terrible shooting weekend for the title contenders. Collectively, Indiana, Wisconsin, Michigan State, and Michigan were 14 for 76 from three this weekend. Two of those teams nonetheless found a way to win.

Thanks to Trey Burke's rip of Keith Appling in the final minute of play, Michigan was able to defend its home court against the Spartans. Although this was a hard fought game, neither team played particularly well on the offensive end. Michigan missed all 12 of its three-point attempts, while Michigan State managed to make just 41 percent of its two-pointers. Credit the defense if you want, but it's not like either of those things are typically strong points for the defenses.

Still, a win is a win, and now Michigan has climbed into a four-way tie for second place in the conference standings, with an outside shot at a share of the conference title. Although the team has hit a rough patch lately, any squad with Trey Burke at the helm (21 points, 8 assists, 5 steals, and 2 turnovers) is a dangerous team in March.

Michigan State, on the other hand, has some real issues at point guard. Over the past 5 games, Appling has made just 12 of his 48 attempts, which is further compounded by his 14 turnovers over the same span. While this one of the poorer stretches of Appling's season, the truth is that the junior point guard just has not been very good this season. I don't know if he misses Draymond Green's co-point guard play, or if it's something else, but Michigan State needs him to round into form, soon.

Purdue ruined the Senior Day festivities at Wisconsin, something no team has been able to do to a Wisconsin team coached by Bo Ryan. The game can be summed up with this statline:

Byrd needed just 9 attempts to get his 6 threes, while Wisconsin heaved 28 attempts toward the rim. Outside of that, however, Wisconsin's offense was just fine. Of course, 6 for 28 is quite a big problem, so that statement has a bit of "other than that, how did you find the play, Mrs. Lincoln?" ring to it. But it was nonetheless true-the Badgers didn't turn the ball over, and dominated in the paint, shooting 59 percent on their shots that were closer than 20 feet from the rim.

That said, Wisconsin's defense was not up to its usual high standards. While Purdue's hot shooting might simply have been bad karma (just 21 percent of Purdue's shots were threes, so the team wasn't exactly seeing a lot of wide-open looks), but the Boilers also feasted on second chances, capturing over 36 percent of their misses. That's a rarity for Badger opponents, as Wisconsin is the best defensive rebounding team in the conference by a fair margin.

The shine comes off a bit for Wisconsin after this game, and I'm starting to think that this will yet again be another Badger team that falls short of its Kenpom promise. I don't think Wisconsin is short on "athletes," or 5-star talent, or that Bo Ryan is able to transform Big Ten games into wrestling matches. Those are the usual reasons given for why Wisconsin hasn't been to a Final Four under Ryan. But this year, I think the problem is that the Badgers don't shoot well enough.

Wisconsin's offense lives and dies by the three-pointer. While other teams (like Florida, for instance) also shoot a lot of threes, the better teams (like Florida) are also quite adept at making two-pointers. Wisconsin is not, ranking as just the 7th-most accurate team from inside the arc in Big Ten play.

While the Badgers can beat just about anyone when they're hot from the outside, they can lose to just about anyone when they're cold. And this team does not shoot well enough from long range to expect a string of hot-shooting games. Should the Badgers go cold during the NCAA Tournament, it will likely be a loss-the Badgers are 2-5 when shooting under 30 percent from three, counting only those games played against the Kenpom top 50.

But when the Badgers do bow out of the NCAA Tournament, and it goes just as I say it will (because really, when have I ever been wrong?), remember that this is a function of Wisconsin's heavy reliance on the three, coupled with the fact that this is not a very good shooting team. Don't buy the talk about talent, officiating, slow pace, or any of the other usual reasons.

Indiana won a rather ugly game over Iowa that was straight from the 1980s. The two teams combined to make just 3 of their 27 three-point attempts, as almost all of the scoring came from inside the arc. But despite the lack of three-pointers, Indiana still managed to score more than a point per possession, mostly thanks to the 42 free-throw attempts. That's a lot of free throws, considering the Hoosiers attempted just 40 two-pointers. Cody Zeller led the way, with a big statline: 22 points (13 shots), 10 rebounds, three blocks, and two steals. Roy Devyn Marble dropped in 20 points for Iowa.

The upshot of both Wisconsin and Michigan State's losses is that Indiana can start printing its Big Ten Championship banner, right now. The only remaining drama is whether the Hoosiers will have to share a piece of the conference crown. The Hoosiers only need to win one of their final two games to win the Big Ten outright.

Illinois survived a scare from Nebraska, which got a huge boost from Dylan Talley and Ray Gallegos, who recorded a combined 43 points on 34 shots. Most of the damage came from distance, as the Cornhuskers shot 9 of 18 from three-point range. Given that kind of shooting, it's actually a credit to the Illini defense that Nebraksa just barely broke the point-per-possession threshold. Still, this game was way too close for comfort for Illinois-had the Illini not made a couple of desperation shots over the course of the game, they could have very well lost this one. Myke Henry provided a nice boost off the bench with 12 points (8 shots) and 9 rebounds.

The Senior Day win probably seals Illinois'  at-large berth. But there's still quite a bit to play for, because with the number of quality wins Illinois has, just a couple more down the stretch could push this team into 5-seed territory.

Minnesota smacked Penn State back to reality on Saturday, denying the Nittany Lions any points for nearly the first ten minutes of the game. And then it got worse. When the dust settled, the Gophers ended up with a 29-point win in a game that was never competitive. Minnesota ended up with 17 layup and dunk attempts (making 13), as this game was pretty much a highlight reel in the second half. Five Gophers ended up in double figures, led by Trevor Mbakwe's 13-13 points-rebounds line.

Minnesota will finish its regular season with a couple of winnable road games, and suddenly this team may yet make some noise in March. If this team can recapture its early-season form, it will be one of the more dangerous teams in the bracket. That may well depend on whether the Gophers can take care of the basketball, as they did on Saturday for the second game in a row.

This week is highlighted by Indiana's attempt to sew up the conference championship all for itself, when it hosts Ohio State tomorrow. But before that game tips off, Illinois and Iowa square off in a very important game for seeding purposes for the Big Ten Tournament. It's probably also a must-win game for Iowa if it wants an at-large bid. On Thursday, Michigan State and Wisconsin will battle, and then, believe it or not, the regular season will come to an end next weekend.