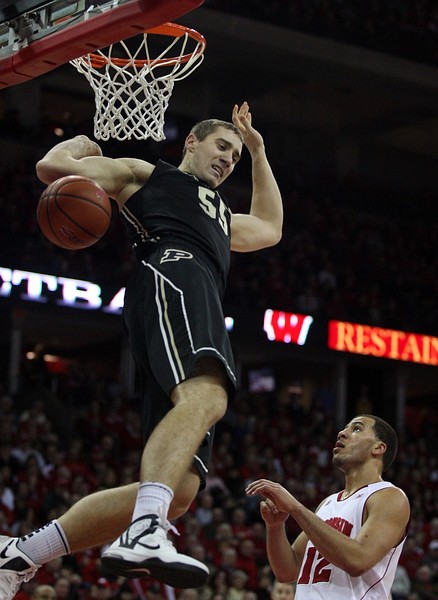 D.J. Byrd scored 16 of his 22 points in the second half and Purdue upset No. 17 Wisconsin 69-56 Sunday afternoon. Terone Johnson added 16 points for the Boilermakers (14-15, 7-9 Big Ten), who had lost three straight road games and four of five overall. Purdue took control with a 21-3 run in the second half during which Byrd had nine points and Johnson eight.

Jared Berggren scored 13 points and Ryan Evans and Sam Dekker had 10 apiece for the Badgers (20-9, 11-5), who had won six of their previous seven.

FINAL: D.J. Byrd scored 22 points and grabbed eight rebounds to lift Purdue to a 69-56 upset win over No. 16 Wisconsin on Sunday at the Kohl Center in Madison. Byrd knocked down 6-of-10 shot attempts, including 6-of-9 from long range. Teron Johnson had a strong game, too, with 16 points, seven rebounds and four assists. Trailing 42-33 with 16:53 in the game, Purdue went on a 21-3 run to seize a nine-point advantage in the middle of the second half. The Boilermakers were able to secure 15 offensive boards and also got a surprising double-digit performance from Sandi Marcius (10 points). Ryan Evans contributed 10 points, corralled seven rebounds, contributed three assists, and shot 4-of-7 from the field for Wisconsin (20-9) in the loss.

HALFTIME: Purdue finished the first half on a 12-4 run to get to within 36-31 of Wisconsin at halftime. Each team took a turn in the driver's seat as the lead changed hands five times. Wisconsin demonstrated its offensive efficiency by racking up nine assists on 14 baskets. Wisconsin's Ben Brust, Sam Dekker and Ryan Evans led all scorers with eight points apiece, while D.J. Byrd, Ronnie Johnson and Terone Johnson all scored six points pace Purdue. The Badgers shot 52 percent ()14-27) from the field, including 40 percent (6-14) from distance.