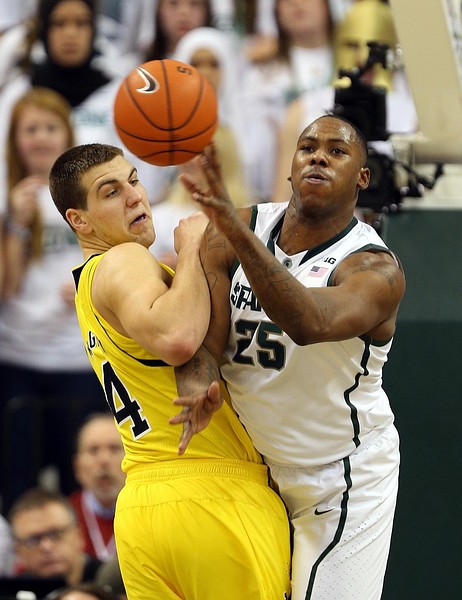 Michigan?s fall from grace has been swift and stunning. In their last seven games, the Wolverines are 3-4. Big Ten title and NCAA No. 1 seed dreams basically vaporized in that shock-the-world loss at Penn State. Before things careen totally out of control, Trey Burke insists changes are needed for a team that 28 days ago was No. 1 in the nation. But I?m not sure how much can be changed at this point. It?s March 1, for crying out loud!

The two chief issues for Michigan: toughness and defense. A terrific offense often masked defensive deficiencies earlier this season. But, the jig is up. The toughness issue? Not sure how that?s gonna improve. You either have it or you don?t. Perhaps better leadership will help. Regardless, there?s no time for sympathy with a visit from Michigan State on tap for Sunday.

"I didn't get many positive after Tuesday (win over No. 1 Indiana); you don't hear the positive a whole lot, especially being the A.D.," Teague said. "I'm used to it. I usually get the negative. I got some before (Tuesday). You don't get a whole lot of the positive. But you know it's out there. People write when they're frustrated. When they feel good, they aren't always led to (write)."

Teague declined to comment on the future of Smith, because he doesn't make public evaluations on coaches during the season. Marcus Fuller of the St. Paul Pioneer Press notes that when asked about the potential influence of buyouts to former football coaches Tim Brewster and Glen Mason and former basketball Dan Monson, Teague said they always "play into your budget decisions." In his sixth season, Smith has made the NCAAs two times but has failed to win a game.

"But for us the buyouts that we're paying now have been budgeted," he said. "So it's not like it's new this year. It is what it is."

In the same interview, Teague discussed the fact that Jerry Kill is the Big Ten?s lowest-paid coach at $1.2 million per season now that Danny Hope and his paltry $970K salary have been canned. New Boilermakers coach Darrell Hazell makes $2 mil per annum. Teague wants to do something about Kill?s low salary.

I sure hope this happens for the sake of Kill and his staff, which is among the most underrated in the nation. The program is headed up, people. Kill?s track record speaks for itself.

Wisconsin big man Ryan Evans hurt his right knee in practice yesterday. Reporters could hear Evans? scream as they waited to enter practice. It?s not known how severe the injury is. For the Badgers? sake, hopefully it?s not a big deal. Smoking-hot freshman Sam Dekker is able to step into the starting lineup if Evans, the team?s top rebounder and No. 3 scorer, is hurt badly for a Wisconsin team that still has Big Ten title dreams. My guess: Rest Evans vs. Purdue this Saturday so he can play at Michigan State on Thursday.

Despite Indiana?s loss earlier this week to Minnesota, Terry Hutchens of the Indianapolis Star doesn?t think the No. 1 Hoosiers will fall far in the polls next week.

Hutchens thinks there?s a scenario out there by which Indiana could be No. 2. If Duke beats Miami on Saturday, he thinks you could make a strong case for IU being No. 2. You could probably make the same case for Duke, but since the Blue Devils got beat Thursday at Virginia, Hutchens doesn?t think that would happen. But if Duke beats No. 5 Miami, that would mean four of the top five got knocked off this week. And he thinks Indiana could stay No. 2 heading into the final week of the season.

So there, for what that is worth.

Bob Asmussen of the Champaign News-Gazette seeds the NCAA field right here. Yes, he still has Indiana as a No. 1 in the Midwest. Illinois is a No. 7 in the South. Sounds perfect.

For Michigan State to finish strong, Keith Appling has to regain his form. He has struggled mightily in the Spartans? last two games-both losses-and has hit just nine of his last 39 shots.

Tom Shatel of the Omaha World-Herald is dialed into spring drills. To that end, he thinks Bo Pelini needs to put his stamp on this defense again. Now.

Shatel points out that Pelini has built a program top-heavy on offense, fast-break offense, the kind of machine that tortures guys like Pelini. But in the process, Pelini?s rep as a defensive master has taken some big hits. In the past two seasons, NU gave up more than 40 points in five games, including 70 to Wisconsin in last year?s Big Ten championship game.

Sam McKewon of the Omaha World-Herald has noticed two trends during the five-year Bo Pelini era: four-loss seasons and falling short of league title and BCS bowl bids. Still, there has been a lot of success. And with spring football around the corner at Nebraska, anticipation builds and questions loom. McKewon looks at the key ones here.

Iowa coaching great Hayden Fry is 84! HawkCentral.com has a nice Q&A with the legend here as he deals with cancer but still enjoys life.

This just in: Michigan offensive tackle Taylor Lewan is really good. Listen to Ohio State defensive tackle Johnathan Hankins, who says Lewan is the best o-linemen he ever has faced. How great is it that Lewan eschewed the pros to play his senior season? Too bad Hankins didn?t do the same.

Pat Chambers says on his radio show that Bill O'Brien texted him last night after the win. Said they texted back and forth for a while.

Still probably the most impressive stat from Penn State's upset. Outscored Michigan 33-12 in the final 10 minutes.

My take: And many had said that Michigan is the best offensive team in the nation.

My Final Four right now would be Indiana, MSU, Florida and Louisville. But given what we've seen this year, good luck predicting this field

My take: That?s a nice foursome, but I?m not sure about Michigan State. Guard play worries me.

Bench averaged 4 pts per reserve. Previously had only averaged more than 2.5 once (home game vs. Northwestern) #Gophers

My take: With more bench production like this, Minnesota may not have slipped out of Big Ten consciousness.

2012-13 – The year of storming the court in college basketball. So many upsets. So many teams that could win NCAA Tournament games.

My take: The court storm has become the theme of the season! Can you storm the court during the NCAA tourney?

Fran McCaffery and I have officially named Penn States Pat Chambers as the B10 Bball coach most likely to get tatted up..John Groce 2nd

My take: Least likely to get tatted up? Bill Carmody and Bo Ryan. Am I right, people?!