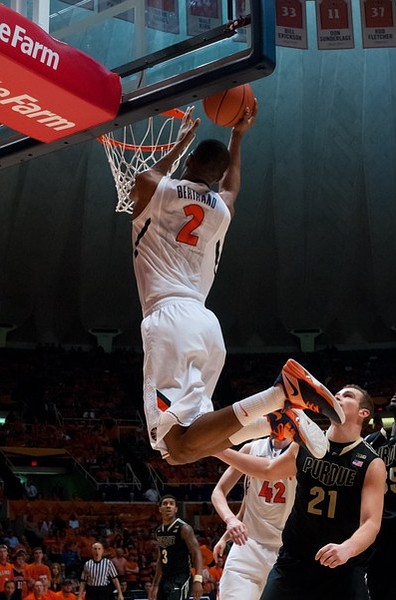 We all know who the superstars are in the Big Ten-Cody Zeller, Victor Oladipo, Trey Burke, Deshaun Thomas, Brandon Paul, Trevor Mbakwe. This year the list really could go on quite a bite. But who do I think have been some of the most underrated players this season in the conference? Glad you asked.

This week's Super Seven is my look at the players that we've all heard of but maybe don't appreciate as much as we should. Go ahead and tell me your lists at the bottom of this post, via Twitter or in my Big Ten mailbag.

1. Joseph Bertrand, Illinois. He often gets lost in the shadow of seniors Brandon Paul and D.J. Richardson. But Bertrand is an effective offensive player, able to beat foes off the bounce. The 6-6 junior also is a good shooter and defender, a terrific athlete who can guard multiple positions. Bertrand knows his role off the bench-and accepts it and excels at it. Stat line: 8.0 ppg; 4.4 rpg; 0.6 apg

2. Will Sheehey, Indiana. In addition to being lost among the star-studded Hoosiers lineup, Sheehey may be the top sixth man in the Big Ten. The sweet-shooting 6-7 junior is deadly from beyond the arc. Sheehey also is a terrific athlete who runs the court well and brings lots of grit and tenacity to the floor. Remember his biceps flex after that killer dunk at Purdue? Sure you do! Stat line: 9.9 ppg; 3.6 rpg; 1.3 apg

3. Ben Brust, Wisconsin. He was at his best in hitting that monster shot just inside halfcourt in the dying seconds vs. Michigan earlier this month(see it in the video above). The miracle bomb tied the game, forcing it to overtime where the Badgers ultimately won. The 6-1 junior is a gritty leader whose experience has been invaluable with Josh Gasser out for the season with a knee injury. Brust is just money as a clutch shooter. Stat line: 11.4 ppg; 5.5 rpg; 2.5 apg

4. Aaron White, Iowa. Roy Devyn Marble often is billed as the ?star? of the Hawkeyes. But White is Iowa?s best player. The kid emotes heart and passion, conjuring images of former Hawkeye great Jess Settles. White is a shot-maker who is comfortable working on the blocks or on the perimeter. No one outworks the 6-8 sophomore. You love him on your team and you despise him on the other team. Stat line: 13.5 ppg; 6.1 rpg; 1.4 apg

5. Dylan Talley, Nebraska. The 6-5 senior does a little bit of everything for a Cornhuskers squad that lacks depth. He?s a nice perimeter shooter who also can beat opponents off the dribble. Talley also rebounds well, showing a knack for positioning while also displaying heart. He just loves basketball-and it shows. Stat line: 14.2 ppg; 5.1 rpg; 2.4 apg

6. D.J. Newbill, Penn State. Jermaine Marshall also deserves mention, but I?ll go with Newbill here. It?s easy to be forgotten on a team that?s 1-14 in the Big Ten. But Newbill has been a beacon all season, doing his best to help compensate for the absence of Tim Frazier. The 6-4 sophomore transfer from Southern Miss not only runs the offense and distributes, but he?s also a proficient scorer. Oh, and Newbill plays hard-all of the time. Hey, he?s a Philly kid. What did you expect? Stat line: 15.8 ppg; 5.6 rpg; 4.0 apg

7. Denzel Valentine, Michigan State. Gary Harris gets the attention among MSU freshmen. And, rightly so. But the 6-5 Valentine has steadily gotten better and emerged off the bench for the Spartans. The son of former MSU star Carlton, Denzel is a physical force on the block at 220 pounds who only will get stronger. He also can play on the wing and will become more deadly as his shot improves. Valentine is a future star. Stat line: 5.5 ppg; 4.3 rpg; 2.5 apg