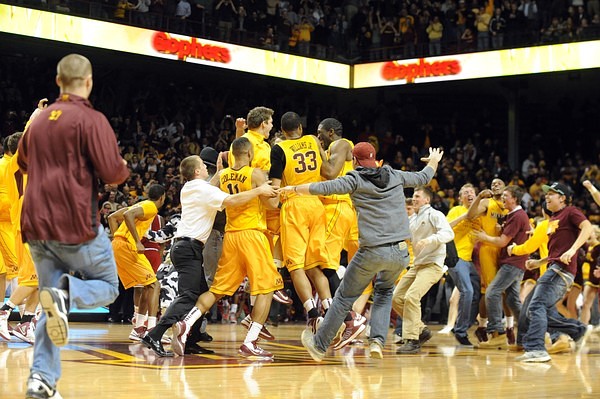 Trevor Mbakwe had 21 points and 12 rebounds to help Minnesota take down No. 1 Indiana 77-73 on Tuesday night, the seventh time the top-ranked team in The Associated Press' poll has lost a game this season.

Andre Hollins added 16 points for the Gophers (19-9, 7-8 Big Ten), who outrebounded Cody Zeller and the Hoosiers by a whopping 44-30 and solidified their slipping NCAA tournament case with an emphatic performance against the Big Ten leaders.

Zeller was held to nine points with four turnovers for the Hoosiers (24-4, 12-3), who have held the No. 1 ranking for 10 of 17 polls this season including the last four.

Austin Hollins dunks and gets fouled:

Joe Coleman throws it down again:

Will Sheehey gets steal and highlight dunk:

FINAL: Trevor Mbakwe scored 21 points and grabbed 12 rebounds to lift Minnesota to a 77-73 upset win over No. 1 Indiana on Tuesday at Williams Arena in Minneapolis. Austin Hollins hit a big field goal with 4:36 to go, giving Minnesota (19-9) the crunch time lead. The Golden Gophers built a seven-point advantage on a free throw by Hollins with 53 seconds remaining, but nearly blew it. Minnesota tallied 17 assists on 27 baskets and secured 22 offensive boards. Minnesota also got a double-digit effort from Andre Hollins (16 points). Victor Oladipo scored 16 points and corralled five rebounds for Indiana (24-4) in a losing effort. Jordan Hulls shot 6-of-9 from the field and scored 17 points for the Hoosiers

THAT BLOCK BY WILLIAMS THOUGH

Did you see how high Rodney Williams jumped to block that Oladipo shot???? #Gophers

Only Rodney Williams could do that. More amazing he didn't foul

That Gopher fast break was a thing of beauty.

Indiana is doing some weird defensive stuff this game. Why press a team that wants to run?

This might be the best game Mbakwe has played in his 12 years here.

The #Gophers are owning the boards, out rebounding #Indiana 34 to 16. Trevor with 11 of those.

If Indiana wants to go far in NCAA they better be able to rebound a lot better.

Imagine what Minnesota?s Big Ten record could be if it actually cared like this every time it took the floor.

Indiana simply cannot guard the low post. Mbakwe and Elliason are scoring whenever they catch the ball deep.

This is the Barn I grew up in. Welcome back.

Throw it to Zeller every time down #Hoosiers

Elliott Eliason getting a standing ovation from the crowd as he exits the game.

Indiana is completely out of sorts right now. Hoosiers need to take control of the game, but I'm not sure they can tonight. #iubb

What can you say about Zeller's performance? He looks lost. Making mistakes on both ends.

Minnesota is 1-of-13 from three. Gophers were 11-of-27 from three in the first game this year.

Minnesota's inability to shoot 3's efficiently will either a.) keep them out of the tournament or b.) bow them out in the first round.

Pro's looking at this game. Mbakwa is printing money

Oladipo playing really well again tonight. Says a lot about his development that you don't notice it the same way anymore.

#Gophers have come out just as aggressive in the 2H, and that's important for this team.

Trevor Mbakwe is on another level right now.

The first time these teams played Indiana had a great first half and sub-par second. IU fans can only hope tonight is the reverse.

Derek Elston gives Indiana a valuable 7th man. Will be able to give them solid minutes off the bench in the postseason.

HALFTIME: No. 1 Indiana took full advantage of the stellar combination of Jordan Hulls and Victor Oladipo, ending the first half against Minnesota up 34-30. Hulls scored 14 points, shot 5-of-6 from the field, and hit 4-of-5 three-point tries, while Oladipo added nine points and three rebounds. The best player on the floor in the first 20 minutes was Minnesota's Trevor Mbakwe, who scored 12 points and grabbed six rebounds, despite getting into foul trouble. Indiana leads without the benefit of a basket from starters Yogi Ferrell, Christian Watford and Cody Zeller. The trio combined to shoot 0-of-11 from the field.

Andre Hollins? 2 points on 1-of-5 shooting with 1 assist? He just has to do more or the #Gophers have no shot.

Perimeter defense has been a problem for Minnesota all year. Indiana feasting on 3s right now.

Did Tubby forget to print the page in the scouting report that says not to leave Hulls free behind the arc?

Cody Zeller, Yogi Ferrell, Christian Watford a combined 0-11 from the field to start for Indiana.

Trevor Mbakwe clearly wants to prove that he's a legit pro. Showing off every skill he has tonight. Taking it to Zeller.

Tubby made great adjustment of offense. Half court moved flex up for wing cuts and double pin down

Cody Zeller has had his lunch taken in this first half. Twice. #iubb

That Indiana ball movement was machine-like. Awesome to see

Minnesota has played an A-minus first eight minutes … and trails by four. That's not a good sign.

Minnesota is playing out of their mind and is down four.

This was about the best start the #Gophers could hope for to get this crowd involved. Energy is up.

Mbakwe playing out of his mind here early. I haven't seen him move so fast since the injury.

Personally I'd be absolutely shocked if Indiana loses tonight. Saying that, expect the unexpected. This game is huge for #Gophers