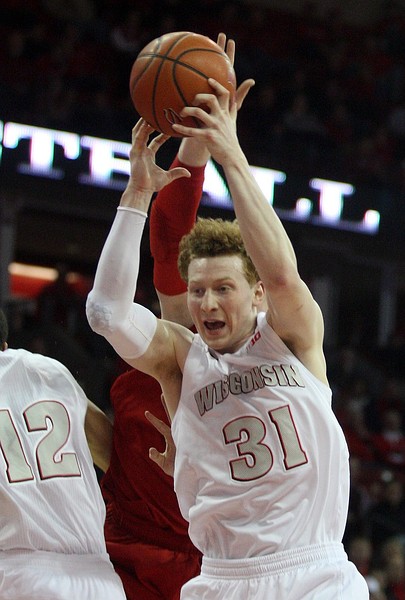 Wisconsin took control of the game early with a barrage of 3-pointers and then cruised to the blowout as Nebraska's offense disappeared.

Ryan Evans fires up jump shot on first free throw, and it goes in:

FINAL: No. 17 Wisconsin held Nebraska to 20-of-61 shooting, as defense led the Badgers to a 77-46 victory on Tuesday at the Kohl Center in Madison. Wisconsin (20-8) held Nebraska (13-15) to 33 percent shooting from the field and hauled in 34 defensive boards, while only allowing nine offensive rebounds. Sam Dekker boosted the Badgers, with 19 points, four assists, 5-of-6 shooting from the field, and 4-of-5 shooting from beyond the arc. Wisconsin hit 51 percent of its field goals (27-of-53), including 48 percent from deep (12-of-25). Wisconsin also got double-digit efforts from Ben Brust (13 points) and Ryan Evans (14 points). Dylan Talley had 21 points, corralled eight rebounds, and handed out three assists for the Cornhuskers in a losing effort.

HALFTIME: Sam Dekker scored 13 points and dished out three assists for No. 17 Wisconsin in the first half to carry the Badgers to a 44-23 lead over Nebraska. Traevon Jackson added seven points, three rebounds and five assists for the Badgers. Leading 21-14, the Badgers went on a 14-0 run to open up a 21-point advantage. Wisconsin made it rain from long range, shooting 62 percent (8-of-13) from three-point land. The Badgers played team basketball in the first half, to the tune of 13 assists on 16 field goals. Eight Wisconsin players scored in the first half. Dylan Talley and Brandon Ubel have carried the Cornhuskers, scoring 18 of the team's 23 total points. Talley has scored 12 and Ubel has added six.