Big Ten Whiteboard: Look out for the Gophers, Hoosiers 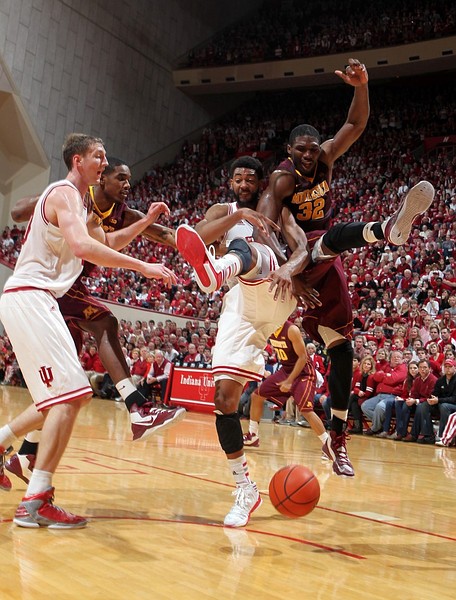 The homestretch of the Big Ten season is here, with teams scrambling to improve their NCAA tournament stock over the final two weeks of the regular season.

Indiana remains in firm control of the Big Ten title chase, holding a two-game lead over Michigan State, Wisconsin and Michigan with four games left. The Hoosiers need to win just two of their last four to ensure at least a share of their first Big Ten title since 2002, when they also played for the national championship.

Here?s what to look for this week.

GAME OF THE WEEK: Michigan State at Michigan, Sunday. Each team still clings to Big Ten title hopes as they chase front-running Indiana. The Wolverines will be looking for revenge after getting drubbed at East Lansing earlier this month, 75-52. Michigan hopes some home-court magic and outside shooting can help it overcome a Michigan State squad that is bigger, stronger and tougher but also has had its mojo jolted in back-to-back losses.

DON?T OVERLOOK THIS GAME: Michigan at Penn State. This will be the teams? second meeting in the last three games. And Penn State gave the Wolverines all they could handle in a 79-71 loss on Feb. 17 in Ann Arbor, forcing a tie (32-32) at halftime. That was one of several narrow defeats for Penn State of late, as the Nittany Lions lost by two vs. Iowa; and by five at Illinois in the last three games. Yes, the Nittany Lions are 8-18 overall and 0-14 in the Big Ten, not tasting victory since December 29. But Pat Chambers has his team playing hard of late. This could be a tight game.

MUST WIN: Wisconsin needs to dispatch Nebraska when the Cornhuskers visit Madison on Tuesday to stay within ear shot of the Big Ten lead. Nebraska is coming off a 64-60 home win over Iowa that probably ended the Hawkeyes? NCAA dreams-save for a miraculous run to the Big Ten tourney title. Tim Miles is a smart coach who is maximizing the talent on his roster, as Nebraska is 2-2 in its last four games. The Badgers won the first meeting this season, 47-41, and have won five of their last six contests overall. Expect this meeting to be every bit as ugly as the first.

BEST INDIVIDUAL MATCHUP: Michigan State?s Keith Appling vs. Michigan?s Trey Burke. In the first encounter, Burke excelled in hitting 7-of-11 shots with four assists and three steals en route to scoring 18 points. Appling tallied only 11 points on 4-of-14 shooting with just one assist. Whoever can win this battle of point guards figures to lift his team to victory in what essential could be a Big Ten title elimination game. Burke is coming off a huge game in a win over Illinois, notching 26 points and eight assists. Appling is floundering, hitting just 2-of-14 shots for nine points with three assists and seven turnovers in his last two games-both losses (to Indiana; at Ohio State).

UPSET ALERT: Indiana at Minnesota, Tuesday. Yes, the Hoosiers are No. 1 in the nation and have won nine of their last 10 games. And Indiana beat the Golden Gophers earlier this year, 88-81, withstanding a furious rally after building a 52-29 halftime lead. More reason to like Indiana: Minnesota is struggling, having dropped four of its last five games. Still, this is a talented and veteran Gophers team that can play with anybody IF it?s clicking. Michigan State and Wisconsin both have fallen at Williams Arena. Be careful, Hoosiers.

BIG WEEK: Michigan State. The Spartans have just one game, but it?s a big one. MSU plays Sunday at Michigan. Each team likely needs to win out and then hope Indiana loses twice in order to forge at least a share of league title. After this game, MSU finishes with home contests vs. Wisconsin and Northwestern.

A LOOK BACK AT LAST WEEK

BIG WINNER: Indiana. The Hoosiers showed why they are the nation?s No. 1 team. First Indiana crushed rival Purdue, 83-55, in a game that wasn?t even that close. If that wasn?t impressive enough, the Hoosiers then marched into East Lansing and dumped No. 4 Michigan State, 72-68. It was the Spartans? first home loss and ended Indiana?s 17-game losing skein at Michigan State. The victory also put the Hoosiers in sole possession of first place.

BIG LOSER: Iowa. The Hawkeyes NCAA tournament dreams took a major hit when they were unceremoniously dumped, 64-60, at Nebraska on Saturday by a Huskers squad that was 3-10 in the Big Ten. Iowa (17-10 overall; 6-8- Big Ten) blew a 19-point lead and now likely will have to win the Big Ten tournament to earn its first Big Dance bid since 2006.

Also have to mention Michigan State, which lost at home to Indiana on Tuesday and at Ohio State on Sunday to drop back-to-back games for the first time this season and push the Spartans two games behind the Big Ten lead.