Burke, No. 7 Michigan cool off Illinois 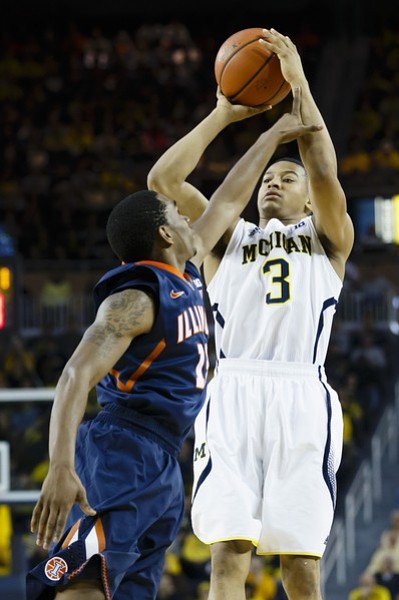 Trey Burke had 26 points and eight assists to help No. 7 Michigan bounce back from a slow start to beat Illinois 71-58 Sunday. The Wolverines (23-4, 10-4 Big Ten) shook off a sluggish first half with a strong second half to win consecutive games for the first time in nearly a month.

The Fighting Illini (20-9, 7-8) had won five straight, a streak that started Feb. 7 by beating top-ranked Indiana.

Michigan played for the first time in a week and looked rusty and sloppy early, turning the ball over the missing open shots.

Glenn Robinson III steals it and slams it:

Nnanna Egwu tips it in:

FINAL: Trey Burke scored 26 points, grabbed three rebounds and handed out eight assists as No. 7 Michigan defeated Illinois 71-58 on Sunday at Crisler Center in Ann Arbor. Michigan (23-4) shot 51 percent from the field (25-of-49) and also received double-digit contributions from Tim Hardaway Jr. (13 points) and Glenn Robinson III (10). Illinois (20-9) got double-digit efforts from D.J. Richardson, Brandon Paul, and Tracy Abrams, who each scored 10. Michigan won the free throw battle, shooting 71 percent (15-of-21) from the charity stripe, compared to 64 percent (9-of-14) for the Fighting Illini. The win for the Wolverines breaks Illinois' five-game winning streak.

Did the #illini come out of the locker room for the second half. I'm waiting for them to show up.

Trey Burke is usually pretty reserved, emotionally, but after that last bucket, he was roaring and smacking his chest at midcourt.

Michigan with more ball pressure this half. Illinois is clearly bothered by it.

Both teams w/ 11 turnovers but Michigan outscoring Illini 22-7 in pts off turnovers.

Illinois doesn't have an offensive rebound in the second half, had eight in the first.

Trey Burke is the seventh #Michigan sophomore to hit the 1,000-point mark.

Bertrand goes down hard trying to dunk (foul by Horford); scary tumble; he's up and moving slowly to bench. #dechr

@dandakich is spot on about J Mo. He's the general defensively. Need him out there.

The Illini and second halves in the state of Michigan don't mix well.

Crowd into it and #Illini have that "deer in the headlights" look with no offensive flow; looking a step slow in this stretch. #dechr

Jordan Morgan has been the X-factor. Great pass. #illini forced to call a timeout as Michigan widens to its largest lead 39-34.

Hardaway back and Burke three puts him one point short of 1,000 for his career

#Illini should remember what happened after playing strong first half at Michigan State; Sparty blitz to open 2nd half changed game. #dechr

Illinois isn't going to keep rebounding half of its misses, they'll need to take care of the ball in the 2nd half to pull off the upset.

HALFTIME: Illinois is dominating the rebounding battle so far, with a 21-13 margin, and Fighting Illini have a 31-28 lead over No. 7 Michigan. Brandon Paul, who has a game-high 10 points, banked in a 3-pointer in the final seconds to break a tie score. The Fighting Illini applied the pressure in the first half, earning second-chance opportunities with 11 offensive rebounds, to just four for Michigan. Seven Illinois players scored in the half. Tim Hardaway Jr. led the way for the Wolverines in the first half, with eight points and three rebounds.

Illinois with 13 points off offensive rebounds.

Worst sign for UM? Not the rebounding (which is bad), but scoreless Stauskas

Michigan has really stepped up its defense. Morgan is great at hedging ball screens.

It's a different world in conference play–Michigan was the best defensive rebounding team in the nation in non-conference. 5th in B1G play.

Michigan's shoes are making me dizzy. The 1970's Houston Astros would have said "no" to those.

If I was a coach, here are two teams I wouldn't want to face in the postseason: #illini and Saint Louis U.

Brady Hoke will be sitting next to #Michigan bench

Crisler is pretty sparse considering #Michigan tips off in 10 minutes. Apparently, people aren't thinking this will be much of a game.

So it looks like Jordan Morgan, Caris LeVert and Max Bielfeldt are all good to go. … None of them look gimpy.

#Michigan 30-1 at home the last 2 seasons. And has been off since it beat Penn State last Sunday. #illini