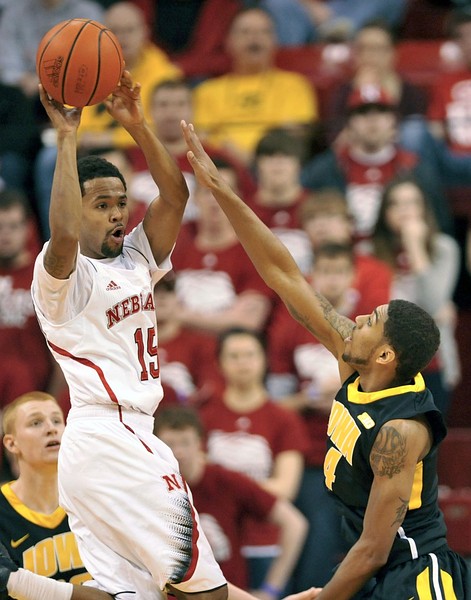 Dylan Talley's tie-breaking, shot clock-beating 3-pointer with 9.2 seconds left sent Nebraska to a 64-60 victory over Iowa Saturday and put a dent in the Hawkeyes' NCAA tournament hopes. The Cornhuskers (13-14, 4-10 Big Ten) used a couple of big runs in the second half to come back from a 16-point halftime deficit and end the Hawkeyes' three-game win streak.

Talley scored 18 points and Shavon Shields added 17 for Nebraska, which shot 62.5 percent the second half and outscored Iowa 19-7 over the last 9:42. Iowa shot 28 percent the last 20 minutes.

Shavon Shields gets the reverse layup And-1:

Eric May gets friendly bounce on 3-pointer:

FINAL: Nebraska trailed by as many as 19 points Saturday, but it took the lead for good on a field goal with 10 seconds remaining by Dylan Talley and hung on for a 64-60 win over Iowa at Bob Devaney Sports Center in Lincoln. Talley poured in 18 points, while Shavon Shields chipped in with 17 points and eight rebounds and Brandon Ubel added 12 points and eight rebounds. Nebraska trailed 41-22 with 21 seconds left in the first half, and while a 15-4 run failed to give it the lead at the moment, it did narrow the deficit to 45-37. Aaron White had a good game for Iowa (17-10) in defeat with 15 points and 13 rebounds. The Cornhuskers also got double-digit contributions from Ray Gallegos (11 points).

Iowa's loss to Nebraska diminishes virtually any hope of an NCAA Tournament bid.

Congratulations to Iowa for 20 minutes of really incredible basketball.

Unreal comeback by #nebrasketball today. Crushing loss for Iowa if Nebraska hangs on

This is why you stay until the end of the game.

Nebraska currently on a 30-14 run since Marble's 3 to put Iowa up by 19 in the final minute of the first half.

#Huskers have closed withing 53-48 and shooting free throws after this timeout at 7:19. Getting stops on defense most key in this run.

Iowa's offense in the second half looks like Nebraska's in the first half. Undisciplined

Eric May continues to make big plays for #Hawkeyes. He's a guy who maybe didn't live up to potential, but he's finishing strong.

Nebraska's 12-4 run closes it to 45-37. Husker crowd into it. Sounds more like Devaney-Carver Center now.

HALFTIME: Aaron White scored 10 points for Iowa, and the Hawkeyes lead Nebraska 41-25 at the half. Iowa helped its cause in the first 20 minutes by hitting all nine of its free throws and limiting Nebraska to 34 percent from the field. Devyn Marble scored eight points for the Hawkeyes, who also received six points from Eric May on a pair of 3-pointers. Ray Gallegos leads the Huskers with 10 points, while freshman Shavon Shields added five points and a game-high seven rebounds. Dylan Talley, Nebraska's leading scorer, has just two points in the first half.

Iowa, the team that couldn't shoot straight from 3-point distance, has made 9 of its last 16 threes.

#Hawkeyes already with 12 bench points, compared to 0 for Nebraska. Iowa 7-7 from the FT too.

At this rate, @CoachMiles' halftime tweet should be interesting. Ugly start for the #Huskers.

Enough Iowa fans here to make it hard to tell who the home team is. Gesell dribbles, you hear boos. Gesell scores, you hear cheers.

White very aggressive early on for Iowa at the offensive end.

Asked Coach McCaffery if his team had a sense of urgency…'We'll find out." #Hawkeyes

Good crowd at Devaney so far. About one-third the fans are from Iowa. It's also Tom Osborne's 76th birthday, FWIW