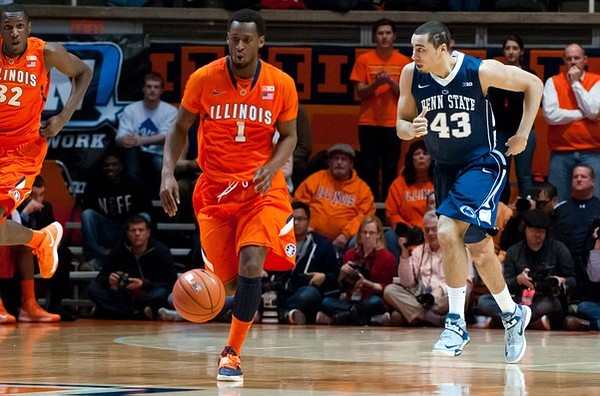 The win was the fifth straight for Illinois (20-8, 7-7 Big Ten). But facing a team that hadn't won since late December, it didn't come easy. Jermaine Marshall's 3-pointer brought Penn State within 62-59 with 5 seconds left. Richardson then sank a pair of free throws that sealed the win.

FINAL: Penn State's trouble at the free throw line came back to haunt it against Illinois. The Nittany Lions shot 56 percent from the line in a 64-59 loss on Thursday at Assembly Hall in Champaign. Jermaine Marshall was a bright spot for Penn State (8-18) in the loss with 20 points, four rebounds, three assists, and 6-of-11 shooting from the field.

Illinois (20-8), thanks to a free throw by Sam McLaurin, led by nine points late in the first and yet nearly saw that lead disappear completely. D.J. Richardson sparked the Fighting Illini, as he scored 18 points, pulled down three rebounds, and had three assists for Illinois in the game. The Fighting Illini shot 23-of-36 from the free throw line. Illinois was tough on the offensive boards, grabbing 16. More Illinois scoring came from Brandon Paul (16 points).

The Nittany Lions were hot from long range, hitting 8-of-19 threes for a 42 percent night from beyond the arc. Penn State also got double-digit performances from D.J. Newbill (12 points) and Sasa Borovnjak (17 points). Both teams had 36 rebounds in the game. The Fighting Illini were winning 19-18 with 4:44 to go in the first half before they went on a 10-2 run to extend their lead to nine points with 1:02 left in the first half. McLaurin finished the run off with a free throw, which helped Illinois lead 29-20 at halftime.

HALFTIME: Illinois pulled ahead of Penn State and holds a 29-20 lead going into the halftime break. Penn State trailed 19-18 before allowing the Fighting Illini to go on a 10-2 run to close the half. Illinois was able to draw fouls and get to the line with regularity. The Fighting Illini made nine of 15 free throws.

Trailing early in the game, the Nittany Lions used a 9-0 run to blow past Illinois and take a 9-2 lead. Penn State was able to put the clamps on the Fighting Illini's leading scorer, Brandon Paul. The senior enters halftime with three points, well below his season average of 16.4. Illinois had nine offensive rebounds in the first half, leading to second-chance opportunities. Seven Illinois players scored in the first half. The Nittany Lions made seven of 12 two-point shots in the first half, but shot 1-of-5 from beyond the arc.