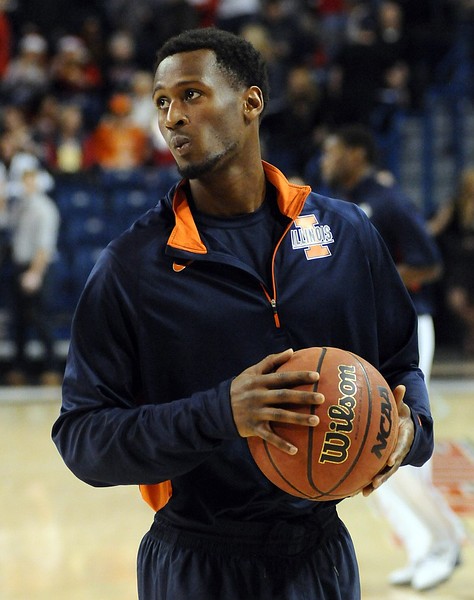 Since slumping to 2-7 in the Big Ten, Illinois has ripped off four wins in a row to greatly enhance its NCAA profile. And, it?s an impressive profile, with wins over the likes of Gonzaga, Butler, Ohio State and Indiana. D.J. Richardson has played a big role in the Fighting Illini?s surge.

Since exploding for 30 points in a win at Nebraska on Jan. 22, Richardson has been on a roll en route to scoring in double-digits in all seven games since to help Illinois improve to 19-8 overall and 6-7 in the league. The Illini have needed the production after slumping following a 12-0 start that pushed them to No. 10 in the polls. Tonight they face Penn State at 8:15 p.m. ET on BTN/BTN2Go.

Fellow seniors Brandon Paul, Tyler Griffey and Sam McLaurin also have played well during the Illini?s run under first-year coach John Groce. I caught up with Richardson as he prepped to play Penn State before a big game at No. 7 Michigan on Sunday.

Q: What has been the key to the team?s current four-game winning streak?
A: Coach got on me and talked to me a few times, saying I needed to take leadership of the team and become way more vocal. He told me I needed to be the ?guy.? I needed to keep everyone going. I?m trying to talk to guys and lead. We have been encouraging each other. We have guys playing better, like Tyler Griffey. And as a team, we have been doing a better job executing on the offensive and defensive ends.

Q: Has the run been more special, since all four seniors have stepped it up?
A: Our seniors have been doing a good job of leading and being mature. We have had a few big, Top 25 wins. And we responded great after those games. That?s something we really didn?t do early in the year. After we beat Gonzaga, we came back and played Gardner-Webb and played a sloppy game. After the Indiana win, we showed a lot of maturity (in winning at Minnesota) and have played up to our potential for four games in a row now.

Q: What was going through your head when you were 2-7 in the Big Ten?
A: We knew it was going to be the type of season where things were going to go wrong at some point. They do for every team. We have learned to deal with adversity and got on our winning streak. We took some steps back and lost some games, but Coach did a good job getting us at least one percent better each game. And that?s what we have been doing.

Q: What?s the biggest difference between Coach Groce and Bruce Weber?
A: They are two different types of coaches. Coach Groce likes to keep the offense spread and he likes to use the ball screen a lot and execute. Coach Weber liked to use motion on offense.

Q: Was your 30-point game at Nebraska a turning point for yourself this season?
A: Right before the Nebraska game, I called for a team meeting. I think I gave myself more to the team and that also helped me, as well. The Nebraska game helped me out and gave me more confidence going into other games and doing more things than just scoring.

Q: How big was the win over No. 1 Indiana?
A: It was a big win for us. It only counted as one win for us. They are a good team and we showed some toughness. We came back, and there have been times when we have been down to different teams and didn?t respond. We did in that game. The upperclassmen have made some plays.

Q: What have you been most pleased about your game this season?
A: I have been pleased with my effort. I have been giving my all each game, playing hard. I have been doing other things besides shooing three-pointers. I have been getting to the basket, shooting pull-ups, rebounding, others things than just shooting threes. I also have been leading and talking more. That will help me not just in basket but in life down the road in whatever I do.

Q: Illinois is rolling. Are you guys ever gonna lose again?
A: Hopefully we don?t. We have to keep the winning streak going and go out for these last few games of my career on a good note. We will keep preparing like we have been.