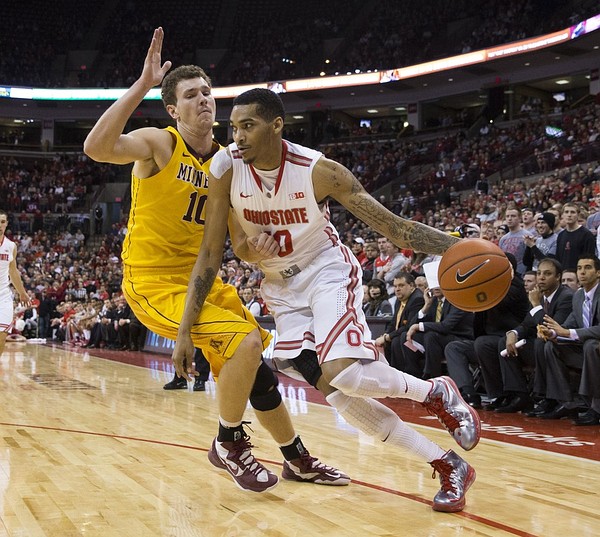 Deshaun Thomas overcame a slow start to score 19 points and No. 18 Ohio State used a 16-0 second-half run to beat Minnesota 71-45 on Wednesday night. Shannon Scott added 11 points and LaQuinton Ross 10 for the Buckeyes, who have won the last six meetings with the Golden Gophers overall and the last six in Columbus.

Remember a month ago when Minnesota scored 84, 81, & 75 in consecutive games against Illinois, IU, & Michigan? Yeah, I don't really either.

I am going to cry!

Minnesota has 13 turnovers this half, 21 for game, 8 of last 12 possessions. #buckbk

Pretty sure if this game were about turnovers, Minnesota would be winning in blowout fashion.

I think Ohio State might have enough points right now to get this win.

The #Gophers don't even appear to be looking to score until the shot clock hits 10. Then it's basically desperation at that point.

Trevor Mbakwe is the Deshaun Thomas of defense. He's outstanding, but he's surrounded by mediocrity.

HALFTIME: No. 18 Ohio State leads 29-23 over Minnesota at the half thanks to a productive first 20 minutes from Aaron Craft. The junior point guard hit a buzzer-beating 3-pointer and finished the half with five points, three rebounds and three steals. Deshaun Thomas scored seven points to pace the Buckeyes, who also received six points from Sam Thompson. It was not the prettiest of first halves, as both teams had 10 turnovers and they combined for 19 fouls. The Golden Gophers' Maurice Walker had a big first half, with seven points and six rebounds.

A Craft three at the buzzer gives Ohio State a 29-23 lead at the break. Tough half of basketball to watch.

Arguably (or maybe not) the greatest #Buckeyes player ever, Jerry Lucas, gets standing O as one of top 75 NCAA tourney players ever.

When Mo Walker has scored your last three buckets … things might not be going as planned. #Gophers

Those wondering why LaQuinton Ross doesn't play more. Turnovers and defense a big reason. You're seeing it tonight.

If you bottle all of these empty possessions for the Buckeyes, you could at least make some type of floating vessel.

LaQuinton is showing why he doesn't get as many minutes as most fans would like.

Gophers with 8 turnovers in 8 minutes. Plus a lot of fouls.

Frosh Amedeo Della Valle gets loud ovation when (surprisingly) he checks in at scorer's table early for #OhioState.

#Gophers Rodney Williams to start tonight, after all. That guarantees us Williams v. Thompson. #highflyers

The great Jerry Lucas is sitting behind Ohio State bench tonight. He is being honored as Top 75 player in NCAA Tournament History. #GoBucks

Tubby says Rodney has been in 'good spirits' and feeling better.