No. 1 Indiana wins in East Lansing for first time since 1991 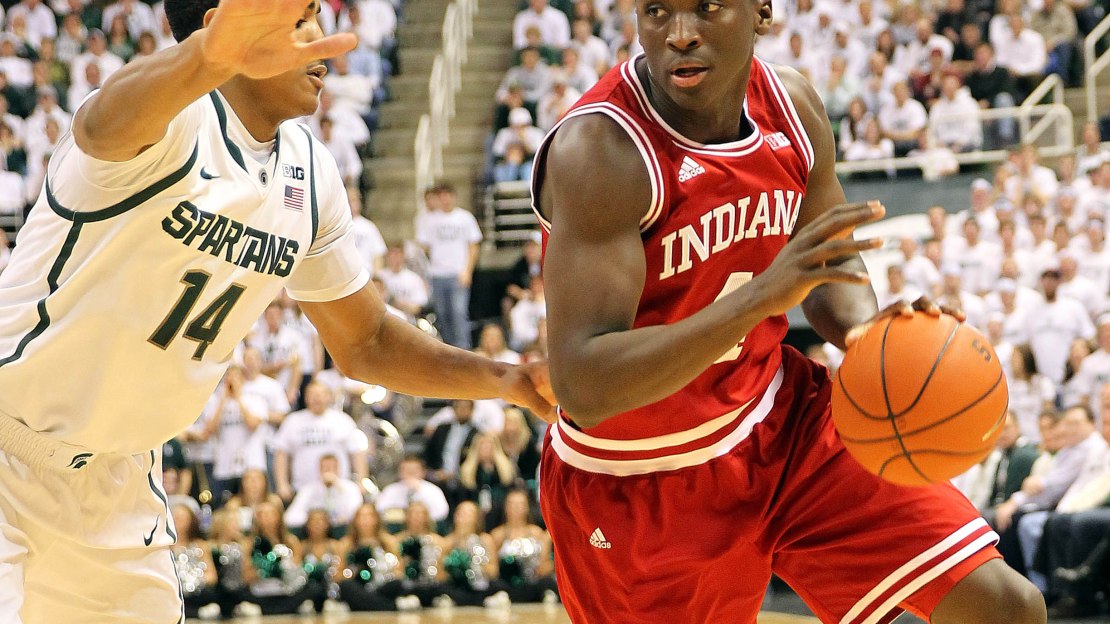 Victor Oladipo's go-ahead putback, dunk and free throws in the final minute lifted top-ranked Indiana to a 72-68 win over No. 4 Michigan State on Tuesday night. Indiana (24-3, 12-2 Big Ten) broke a first-place tie in the conference. The Hoosiers had lost 17 straight – since 1991 – on the road against the Spartans.

[ RELATED: Did You See This? Oladipo gets fancy on inbound, slams it home ]

Trailing by three with 3.7 seconds left, Gary Harris was fouled on a 3-point attempt. He missed the first one and then after making the second, missed the third on purpose. Indiana got the rebound and Oladipo hit two free throws to seal the win.

Keith Appling had missed the front end of a one and one with a little more than a minute left.

Victor Oladipo steals it & dunks it:

Gary Harris gets the steal and flush:

FINAL: No. 1 Indiana trailed in the crunch time on Tuesday, but took the lead for good on a field goal with 42 seconds to go by Victor Oladipo and hung on for a 72-68 win over No. 5 Michigan State at the Breslin Center in East Lansing. Oladipo picked up Indiana (24-3) with 19 points, nine rebounds, and 7-of-11 shooting from the field. The teams traded the lead 10 times in the game. Jordan Hulls shot 4-of-7 from the field and scored 12 points for the Hoosiers, who aslo got solid contributions from Christian Watford (12 points) and Cody Zeller (17 points). Adreian Payne scored 17 points, grabbed seven rebounds, and went 6-of-8 from the field for Michigan State (22-5) in the loss. The Spartans also got a double-digit effort from Gary Harris (19 points).

Ball don't lie. Should have been a no call.

Indiana just did to Michigan State what Illinois did to Indiana

Indiana learned from the Illini playbook on that one.

Best Ferrell drive of the night, an assist off the backboard to Oladipo.

How smart do you have to be to get that elevation and then have the presence of mind to wait for it to exit the cylinder?

Indiana fans are going to explode over that no-call if Hoosiers lose.

Michigan State has led by one twice. Once Appling charged in transition, the second time he turned it over for a layup.

Victor Olidipo is a superstar in the making!

There's your "Why doesn't he do that all the time?" Adreian Payne Moment.

Yeah, college basketball really stinks. If that's what you think, u haven't been paying attention & certainly haven't been watching IU-MSU.

If you were watching Michigan State for the first time you'd think Gary Harris was their go-to scorer. Not playing like a freshman.

College hoops has been horrendous as a whole this season, but the Big 10 has been good and this Indy-MSU game is tremendous.

Costello is out of his mind right now.

Hulls is cold blooded. If he saw you drowning, he'd throw you a cup of water.

Tough break for Michigan State that Payne still gets his third there. Elbow from Watford appeared to come before imminent blocking foul.

Saw the replay. How in the heck was that a foul on Payne?

I bet Watford gets hit with a flagrant foul here for an elbow. Inadvertent, but they don't make a distinction anymore.

Twice in the first 2 minutes of the second half, MSU can't grab a defensive board and allows Indiana a second offensive possession.

Indiana didn't really go through Zeller all that much in the 1st half, but still had a 6-pt halftime lead. #Spartans need to keep him quiet.

The next 20 minutes of basketball could give us a good idea of whether the Hoosiers could win an outright Big Ten title.

Adreian Payne (10), Gary Harris (8) have combined for more than half of Mich St's points. I think Indiana will take that ratio.

HALFTIME: Adreian Payne is doing all he can, but No. 5 Michigan State is down 36-30 to No. 1 Indiana as the teams head to halftime. In the first 20 minutes, Payne scored 10 points, grabbed five rebounds, and shot 3-of-3 from the field. Victor Oladipo has nine points and four steals to lead the way for the Hoosiers, who also received eight points from Cody Zeller and seven from Christian Watford. Indiana has negated Keith Appling (14.1 ppg), as Michigan State's leading scorer has two points. The Hoosiers had eight offensive rebounds in the first half, leading to second-chance opportunities.

Deja vu: Indiana playing about as well as you can play but MSU somehow hanging around. If IU were ever to experience a human cold spell…

Keith Appling has not had a banner first half.

Incredible play by Valentine. He shows flashes–huge breakout potential for next season.

Elston back in for IU. Indiana has already gotten good minutes out of him as a big man plugger. He averages only 6 mins per game.

Early thoughts: MSU can't run with IU like they think they can, Hulls can't guard Harris, & I'm pretty sure Elston accidentally made that 3.

Zeller clearly a matchup problem for Nix when IU has it. Payne making plays matched up on Zeller when MSU has it, though.

Dane Fife just came over and was kind enough to leave a note for @indystar_hutch . "Hutch, you (stink). — Dane — I think that covers it

If you love Sports, if you love college basketball this is place to be tonight. Final Four feel with two #1 seed teams that could meet there

Excited to see if the Izzone could be any better than they were last week vs michigan. #beatindiana

Tom Izzo tells the Spartan Sports Network that Victor Oladipo is the most complete player in the country.

I'm still in the bowels of Breslin an hour before tipoff & the Izzone already is as loud as I've ever heard it through the concrete walls.

Best early T-shirt I've seen in the Izzone tonight in obvious reference to IU's shirts that read "We're Back." These say "We Never Left.''

Travis Trice cleared to play tonight for MSU, but questionable. Interesting to see if he plays at all.