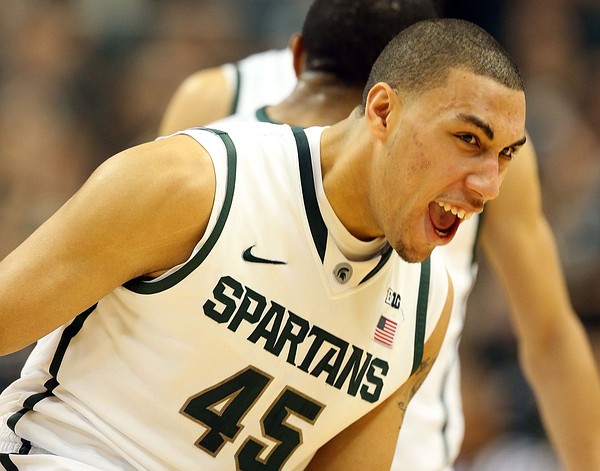 In case you hadn't heard, there's a big game tonight in East Lansing, as No. 1 Indiana visits No. 5 Michigan State. So, let?s start our daily links right there. The good news for the Hoosiers is that play star guard Victor Oladipo will play after hurting an ankle in the last game. Good thing, because IU will need him.

Some bad news: History is against Indiana, which has lost 17 in a row at the Breslin Center dating to Feb. 28, 1991. Where were you? In that win, the Hoosiers were led by Calbert Cheaney and Damon Bailey. Remember them?

Terry Hutchens of the Indianapolis Star says that in many ways, it?s a bigger game for Michigan State than for the Hoosiers. If Michigan State wins, it will have a one-game lead on Indiana for first place. But the Spartans still must play at Ohio State and at Michigan, and at home against Wisconsin and Northwestern.

If Indiana wins, the Hoosiers will have inside track to the Big Ten title. That?s because they would own a tiebreaker against the Spartans by having swept the season series. It would be a virtual two-game lead over Michigan State rather than one. The Hoosiers finish the season at Minnesota and Michigan, and at home game against Ohio State and Iowa.

Graham Couch of the Lansing State Journal tell us to listen to the matchups-not Tom Izzo-when assessing this game. The result: The Spartans are better.

Couch is correct. This is a special group of Spartans. MSU is the rare college squad these days without a hole defensively, without a player to hide or matchup to fear - like Indiana?s Jordan Hulls trying to defend Gary Harris tonight, or Michigan?s big men last week flailing against Derrick Nix and Adreian Payne.

Toughness? Intensity? Grit? Michigan State has all of those traits. Michigan needs them all. And it needs them now, says Nick Baumgardner of MLive.com.

[ENTER TO WIN: Sign up for the Buffalo Wild Wings Trip to the Tournament Sweepstakes. ]

Anyone who saw the Wolverines? loss at Michigan State knows that. Individually, Michigan does have toughness. Collectively? Moving forward, Baumgardner says, when an opponent throws a punch, Michigan has to punch back — otherwise, this season that started with so much promise could fizzle out in an utter disappointment.

After losing three of four games, Ohio State is in a funk. Doug Lesmerises of the Cleveland Plain Dealer wonders if the Buckeyes can get back on track.

This team is in fifth place in the Big Ten and is just 1-7 vs. ranked teams. There still is time for a strong finish, but the defense-among other things-needs to tighten.

Marcus Fuller of the St. Paul Pioneer Press wonders: What happened to all of that talent on the Minnesota roster? Before the season, Tubby Smith told Fuller about the NBA potential of Andre Hollins, Trevor Mbakwe, Rodney Williams and Austin Hollins. Well, that talent hasn?t carried the Gophers to big things. The issues: The Gophers lack a consistent shooter to pull teams out of zones; there is no true low-post scorer; the guards struggle to handle the ball under pressure are among them. Want more? Read here.

More bad news for Minnesota: Rodney Williams may miss Wednesday?s game at Ohio State because of a bad shoulder that has hampered him for weeks. If so, Elliott Eliason would get the start. Gulp.

Tom Oates of the Wisconsin State Journal thinks the Badgers can stay in this Big Ten race if they can bottle that offensive performance vs. Ohio State. How can a team that looked so bad offensively on Thursday at Minnesota turn around and play so effectively on Sunday vs. Ohio State? An over reliance on long-range shots is an issue.

Lee Barfknecht of the Omaha World-Herald points out that Nebraska will have a big say on if Iowa makes it to the Big Dance for the first time since 2006.

Iowa plays Nebraska twice in its final five regular-season games - Thursday in Lincoln, and March 9 in Iowa City. Barfknecht says a scenario in which the Hawkeyes don't sweep the Huskers and still make the NCAA tourney as an at-large team is difficult to imagine. And, he?s correct.

The consensus has been that an 8-10 record in Big Ten play would guarantee most conference teams a bid. But Iowa isn't most conference teams, Barfknecht says. No doubt. The numbers are sobering. The Hawkeyes, with an NCAA RPI of 80, are paying a high price for a really low nonconference strength of schedule.

Kenpom.com ranks it 339th nationally out of 347 teams. Iowa played RPI No. 342 South Carolina State, No. 331 Howard, No. 318 Texas-Pan American, No. 328 Texas A&M-Corpus Christi and No. 302 Coppin State. That slate has dropped Iowa's overall schedule strength, according to kenpom.com, to 71st nationally. For comparison, Nebraska's is 11th.

As Brandon Paul has become a more well-rounded player, Illinois has ripped off a four-game winning streak. Coincidence? I think not.

An NCAA tourney berth that seemed remote not long ago is basically a certainty. ?I think his mind is in a good place now,? said Illinois coach John Groce. ?He?s really soaking all this in.?

It sure is fun to watch.

Just ask the Penn State defensive players about the ascension of John Butler to coordinator. And they will tell you how pumped up they are about it, says Travis Johnson of the CentreDaily.com.

While departed DC Ted Roof was known for his fiery displays on Penn State?s sidelines and his aggressive schemes that included numerous blitz packages, Butler, who coached Penn State?s defensive backs last season, hasn?t been shy about letting his emotions surface on game days. He is a smart coach who knows how to scheme.

Dirk Chatelain of the Omaha World-Herald says recruiting changes shrink Nebraska?s sphere of influence. And, this isn?t a good thing.

Chatelain says Nebraska recruiting over the past decade has focused outside a 500-mile radius from Lincoln. Under Tom Osborne and Frank Solich, Nebraska signed about 55 percent of its prospects from the 500-mile radius. Since 2004, it's only 36 percent. In-state numbers have taken the biggest hit, says Chatelain. There just isn?t enough talent within 500 miles of Lincoln to build a championship-caliber roster. Bo Pelini knows that, which is why Nebraska has to cast a wider net. It paid off with a Top 25 recruiting class this year.

My take: Yet more evidence of the league?s strength.

The terrible truth about NCAA: Lot of very good people work there, but entire organization is viewed by what 1 part, enforcement staff, does

My take: It?s called being painted with one broad brushstroke.

No. 1 Indiana at No. 4 Michigan State is the first ever meeting of top-5 teams in East Lansing. #iubb

My take: More juice for an already juicy game.

Bilas: "This is not a vintage Wisconsin team, but a team that is capable of beating almost anyone and is worthy of your respect." #badgers

NFL's Mike Mayock: 2 things about Denard Robinson I know: he's tough and he's quick. What I don't know is how well he catches.

My take: We will find out about his hands in the Combine.