Big Ten Geeks: Getting ready for the Dance 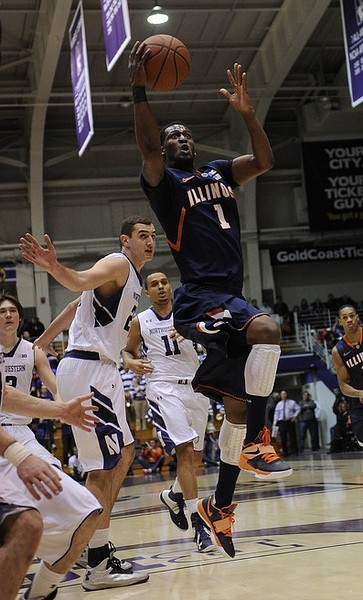 We're only a few weeks away from Selection Sunday, and there's only a handful of games left for teams to pick up signature wins. This weekend, some did, and some didn't.

Iowa picked up an important win over Minnesota on Saturday, rallying from an early 16-point deficit to an impressive 21-point win. And frankly, this game was over about midway through the second half. The turning point came when Fran McCaffrey deployed a zone defense, which flummoxed the Gopher attack. This isn't the first time that Minnesota has looked confused against a zone-Northwestern sprung the upset against the Gophers by doing the same thing-but it's strange that this still functions like kryptonite to Minnesota's offense. After all, it's not like this team lacks shooters. Coming into this game, there were four Gophers shooting 34 percent or better from behind the arc, including a couple over 40 percent. While no one is going to confuse this group with Creighton's perimeter attack, it should be sufficient to stretch a zone and open things up in the middle. What killed the Gophers on Saturday was a mixture of poor spacing and tardy passes. It doesn't matter how well the team can shoot, if the execution is lacking.

This wasn't a minor loss for Minnesota, either. The team now stands at 6-7, with road games remaining against Ohio State, Purdue, and Nebraska, plus a couple of home matchups against Indiana and Penn State. The likeliest scenario puts the Purdue game as the arbiter of whether Tubby's team will reach .500 in conference play, or not. That said, Minnesota is probably safe at 8-10, given the fact that it has a strong schedule and a few good wins. But it's the kind of record that will make Gopher fans sweat on Selection Sunday.

Iowa needed this win plenty, as well. While the Hawkeyes still look on track for a 9 or 10 win finish in conference play, there's been a fair criticism that this team lacks quality wins. That's true, and it's largely due to a combination of an easy out of conference schedule (the softest in the conference, in fact) as well as an easier path in conference play (Iowa's schedule includes two games against each of Northwestern, Penn State, Nebraska, and Purdue). Frankly, Iowa is still in a bit of danger of missing the Tournament due to an unaggressive schedule. We've seen this before (Northwestern, I'm looking at you), so it's a lesson that bears repeating-when a team looks to be headed to the general vicinity of the bubble, it's to that team's advantage to schedule tougher, not easier.

Iowa still has a couple of chances for top-50 wins remaining, and to get them it will likely need similar efforts from Aaron White and Roy Marble, who combined for 30 points on 15 shots. Austin Hollins led the way for Minnesota with 14 points on 7 shots.

For the second time this season, Indiana took its in-state rival behind the woodshed in a 83-55 win.

The win catapulted the Hoosiers' defense all the way to 2nd in conference play, but they seem to have a special ability to shut down Purdue.

While Purdue has struggled to score against lots of teams this year, solving the Indiana defense has been exceptionally difficult for the Boilers. That said, this is a young team that will get much better next season, especially if A.J. Hammons makes the leap that others have predicted. In this game, however, Hammons was a non-factor, scoring just 6 points on 10 shots. His counterpart, Cody Zeller, had a typical Zellerian line of 19 points (12 shots) to go with 9 rebounds, 2 blocks, and a steal. But the real hero of the game was Will Sheehey, who exploded for 22 points on 9 shots (he made all of them), and perhaps most impressively, managed to keep the taunts to a minimum. If Indiana loses its big four after this season, Sheehey is likely to be the focal point of the offense next year, so IU fans should take some comfort from this performance.

Penn State racked up another moral victory on Sunday, but that's simply another way of saying they lost again. While I'm sure no one outside of State College expected this to be competitive, the Nittany Lions made a real game of it in a close loss to Michigan. It was actually somewhat of a minor miracle for PSU to be in this game, considering it turned the ball over 13 times (to Michigan's 6), attempted about half as many free throws, and shot worse than the Wolverines. But accuracy at the line and competence on the glass allowed Pat Chambers' team to put a scare into Big Blue, but at the end of the day it's another step on the road to winless. The best remaining chance for a win is still a road game at Northwestern, but even that is probably a longshot, assuming Bill Carmody's bench doesn't get any shorter between now and then.

Wisconsin blitzed the Buckeyes in a game that is a cause for some consternation among Buckeye fans. While the margin was ugly, winning at the Kohl Center is still a difficult task, so it's not as if OSU dropped a game that should have been considered a win. That said, Ohio State is going to have to prove just how good it is, soon. Right now, this team really only has two quality wins, and both of them are at home. The flipside is that the Buckeyes also don't have any bad losses, but this team is probably playing for seeding at this point. The good news is that four of its final five games come against RPI top-50 teams, and three of those are at home.

Nebraska hung tough with Michigan State for about three-quarters of the game on Saturday night, but ultimately the Cornhuskers allowed too many second chances and the Spartans pulled away. Michigan State grabbed 48 percent of its misses, which is something of a mini-throwback. One automatically assumes that Michigan State dominates the offensive boards every season, but that hasn't been the case this year:

One has to go all the way back to 2006 to find a Michigan State team that's as ambivalent toward offensive rebounding as this one. Instead, the key for MSU's offense has largely been outside shooting, which has been fueled by freshman Gary Harris. In fact, it was Harris' return to the lineup from injury that solved the Spartans' shooting woes, as the freshman is now shooting over 44 percent on his threes. On Saturday, fans were treated to a 14-point performance on just 6 shots. At this point, we can probably just hand the Freshman of the Year award to the Indiana native, as he's probably Michigan State's best all-around player at this point.

Finally, Illinois continued its resurgence by blowing out Northwestern, 62-41, in a game that wasn't that close. The Illini took control of the game with a 26-0 run against the depleted Wildcats, who really didn't have a lot of offense other than 23-foot jumpshots. Even worse, Northwestern was especially frigid in Welsh-Ryan, converting on just 5 of 27 three-point attempts. The 14 turnovers also didn't help, as NU limped to 0.68 points per possession, the worst mark from Bill Carmody's crew since last season's Baylor loss.

It's performances like this that cause me to second-guess my prediction that next year's Wildcat team will make the Dance, but I'm going to stick with it. While Jared Swopshire and Reggie Hearn are significant losses, the expected additions of Drew Crawford and JerShon Cobb, plus the maturations of Northwestern's many sophomores, should provide a big boost to this team. The key will be the development of Alex Olah, who needs to provide a credible interior defensive presence, something this team has consistently lacked over the years.

For all intents and purposes, this win probably clinched an NCAA Tournament bid for the Illini, in a season that appeared to be off the rails. A couple of weeks ago, the Illini were in the midst of a four-game losing streak, sitting at 2-7 in conference play, and staring down a game against Indiana. While the win over the Hoosiers was big, in my mind the real transformation for this team started against Michigan State: 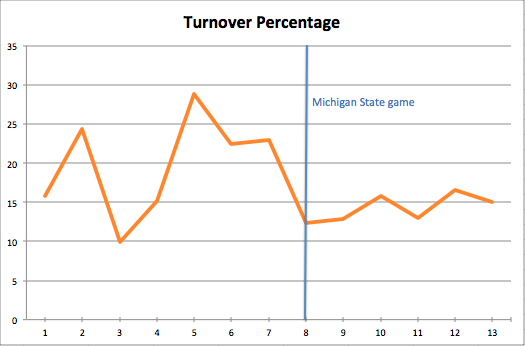 Since the Michigan State game, John Groce has all but prohibited turnovers from his team. That's been the big change, but not the only one-over the past three games, Illinois has held its conference opponent to under a point per possession. That's something the Illini had only done twice in the ten games prior.

D.J. Richardson continued his personal surge with 18 points (15 shots) to go with 8 rebounds. Hearn was the only Wildcat in double figures with 11 points, and it took 11 shots to get there.

It's another huge week, and it starts tomorrow when Indiana visits East Lansing in a battle for first place. I know we still have a few games left, but it's shocking to me that Michigan State is likely to be your Big Ten leader this late in the season. I expected MSU to be good, but not quite this good in conference play. Super Wednesday will feature a big game between Minnesota and Ohio State, and both teams are desperately seeking to clean up their Tournament resumes.