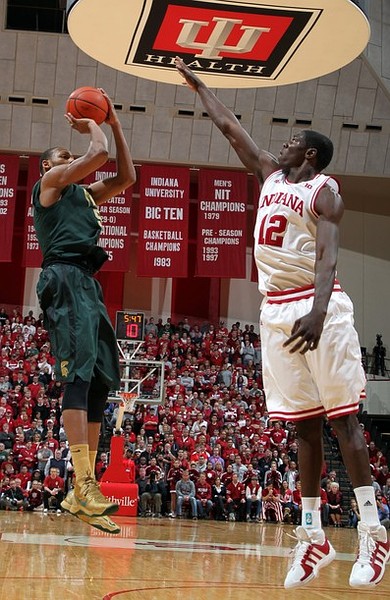 It?s that time of the week when I reach into my mail bag to take your questions. Hoops dominate the talk as we head toward the home stretch of the season. Scheduling also is a hot topic. Let's go!

How many teams do you think will make it to the NCAA tourney? – Joey
It appears that seven are locks at the moment: Indiana, Michigan, Michigan State, Ohio State, Wisconsin, Minnesota and Illinois. And the Hoosiers and Spartans are No. 1 seeds in the mock brackets that matter. And don?t discount Iowa, which could be an eighth team from the Big Ten that gets a bid.

[ RELATED: Where does your team fall in our latest Big Ten Power Rankings? ]

Do you think Iowa can make it to the Big Dance? – Tom K.
It is gonna be a tough hill to climb. I think the Hawkeyes need to finish 10-8 in the Big Ten and win at least one game in the league tourney to stamp its ticket. Iowa-6-7 in the league–is on a roll right now, winning three games in a row. The Hawkeyes have games left at Nebraska; vs. Purdue; at Indiana; vs. Illinois; vs. Nebraska. It may be close. Iowa last made the Big Dance in 2006. This is a young and exciting Iowa team with a bright future.

How many wins do you think it will take for Illinois to make it into the tourney? – Mel Martin
Most people, me included, think Illinois needs to get to 8-10 in the Big Ten. The Fighting Illini enter the week on a roll, having won four in a row with a 6-7 league mark. So, Illinois is close. And getting to eight wins is doable with games left vs. Penn State; at Michigan; vs. Nebraska; at Iowa; at Ohio State. By the way: mock brackets from around the Internet have Illinois in the tourney right now.

Do you think the Big Ten is that good? Or do you think the league is benefiting from a perception of greatness based on all of the preseason hype? – Rod Gladstone
Well, the RPI ratings index has the Big Ten as the top league in the nation. That?s good enough for me. The conference?s teams are beating up on each other. It?s best on best often times, and there has to be a winner and loser, obviously. But, we truly will find out how good the league is when we get to March and the NCAA tourney. The Big Ten needs a big performance in the tourney, as it hasn?t won a national title since Michigan State cut down the nets in 1999-2000.

We will see if your comment "When every team in the Big Ten is playing its best-none is better than Indiana" is correct or not. I think NOT. Remember, the Spartans lost by five at Indiana and Keith Appling played less than 18 minutes. Yet, it was a two point game with less than a minute to go. It is my opinion that MSU has equal-to-or-better defenders at each position than IU does. Thus, IU will not play its best and MSU will play better offense against IU's defenders. We will find out if IU is tough or not, too. I expect us to play as well as we did against Michigan last Tuesday with Travis Trice hopefully back. – Mike
You make excellent points. I don?t think Indiana will win in East Lansing on Tuesday. The toughness factor is big in Michigan State?s favor. And a big key for the Spartans will be their ability to shoot the ball. Gary Harris and Keith Appling must hit some shots from the perimeter. If that happens, it will open the interior for what arguably is the top front line in the nation in Branden Dawson, Adreian Payne and Derrick Nix.

I was glad to hear that Big Ten teams no longer will be scheduling FCS schools. Don't get me wrong, a part of me likes giving the little guy a chance. But a team's resume is built, partly, anyway, upon who it plays. And, in that respect, I don't like cupcakes. Not at all. – MW
I hear ya. For the most part, the FCS games Big Ten teams played were non-competitive, lopsided affairs. The Big Ten team got what it wanted-an easy win. The FCS school got what it wanted: a fat check. But just because Big Ten schools won?t schedule FCS teams in the future doesn?t mean FBS cupcakes won?t be found to take their place.

I like the idea of a nine- or 10-game football schedule. I also would like to see every team play each other home and away in basketball. – Jamie Greenlee.
I also would like to see home and away in hoops. That?s how it was when I grew up, as the Big Ten had a true round robin schedule that crowned a true champ. But it likely won?t happen. To do that now would mean a 26-game conference schedule! I don?t see the coaches allowing that.

I love the idea of Penn State playing a game in Ireland. I'm in! I love another reason to visit Ireland. – Joe
As I said in the piece I wrote, Penn State would be wise to schedule such a game, as it would serve as a de facto bowl game. And if I was Penn State, I would also try to get games in places like Hawaii and New York.