Brust, Berggren lead No. 20 Wisconsin past No. 13 Ohio State 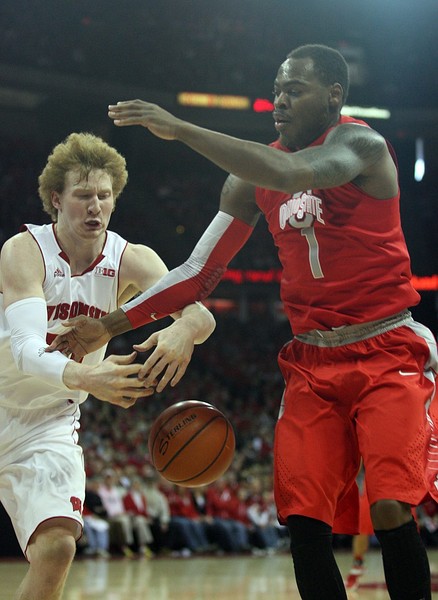 The win kept Wisconsin tied with Michigan for third in the conference, two games behind leaders Indiana and Michigan State. Ohio State dropped into fifth place.

On the break, Sam Thompson throws it down:

FINAL: No. 20 Wisconsin took down No. 13 Ohio State on Sunday, recording a 71-49 victory at the Kohl Center in Madison. Ohio State (18-7) could not keep up with Wisconsin (18-8), as the Badgers cruised to the win behind 54 percent shooting. Ben Brust contributed 15 points, grabbed 11 rebounds and dished out three assists, while Berggren added 15 points and eight rebounds. Wisconsin, which held the Buckeyes to 37 percent shooting from the field, also got double-digit contributions from Traevon Jackson (10 points) and Sam Dekker (13 points). Deshaun Thomas contributed 18 points and hauled in six rebounds for Ohio State in a losing effort. Sam Thompson was 5-of-8 from the floor and chipped in 10 points for the Buckeyes.

Where was this Traevon Jackson at the end of the Minnesota game? Kid redeeming himself today. LEGGO BADGERS

At this point, Wisconsin might have the best perimeter defense in the country.

Buckeyes have the same holes they've had all year, that everyone knows. But seem to have given in to a rough day,

Also, on that "talent" thread: 5 sophs playing a lot this year barely played last yr. Should be better next year. You can hope. #buckbk

The only good thing about this game: My story is almost-completely written.

Words I never thought I'd say: Traevon Jackson is outplaying Aaron Craft and I love every second of it #Badgers

All Traevon Jackson does is hit big shots. #Badgers

The Ohio State interior defense has been ridiculously poor today.

HALFTIME: No. 20 Wisconsin took full advantage of the stellar combination of Jared Berggren and Ben Brust, ending the first half against No. 13 Ohio State up 39-22. Berggren scored 10 points, grabbed three rebounds, and shot 4-of-5 from the field, while Brust scored nine points and grabbed four rebounds. The game was tied 6-6 before the Buckeyes went into a funk, going the next 6:50 without scoring, and allowing the Badgers to take a 24-6 lead in the first. Wisconsin moved the ball in the first half, accounting for 11 assists on 16 field goals. Ohio State's Deshaun Thomas already has 10 points and five rebounds.

How's THAT for a first half? #Badgers head to locker room up 39-22, matching their highest-scoring half in #B1G play this year

Berggren with two blocks. That ties him with Brad Sellers for second all-time at UW.

Could be a momentum-changing flop by Deshaun Thomas to get a charge call on Berggren. Now Buckeyes just need to score

What are we doing….. Wisconsin is not TOTALLY beating us off the dribble…. We are over helping big time…. #buckeyes

#Buckeyes have missed 9 shots. #Badgers have allowed them just 1 offensive board

UW had 13 points in seven possessions. Could be 14 if Berggren makes his free throw.

What would get Melvin Gordon, James White, Beau Allen & Warren Herring to look like this at today's #badgers game? pic.twitter.com/3XfJJpgb