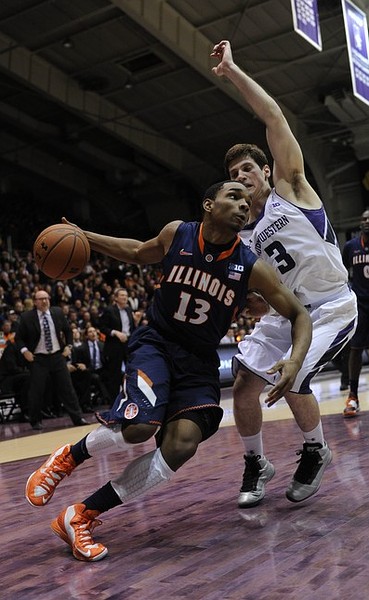 D.J. Richardson scored 18 points to lead Illinois to a 62-41 victory over Northwestern on Sunday night. Tracy Abrams added 13 points off the bench for the Illini (19-8, 6-7 Big Ten), who have won four straight and got revenge for a 68-54 loss to Northwestern last month.

Reggie Hearn led Northwestern with 11 points. The Wildcats (13-13, 4-9) have lost three straight and five of their last six.

Illinois scored the first 16 points of the second half after ending the first half on a 10-0 run.

FINAL: Illinois held Northwestern to 12-of-48 shooting, as defense led the Fighting Illini to a 62-41 victory on Sunday at Welsh-Ryan Arena in Evanston. Illinois (19-8) held Northwestern (13-13) to 25 percent shooting from the field and hauled in 29 defensive boards, while only allowing 10 offensive rebounds. D.J. Richardson gave the Fighting Illini a boost, thanks to 18 points, eight rebounds, and 8-of-15 shooting from the field. Tracy Abrams was 5-of-8 from the floor and chipped in 13 points. Leading 19-15 late in the first, the Fighting Illini used a 28-2 spurt to open their cushion to 30 points midway through the second half. The Wildcats got double-digit efforts from Reggie Hearn (11 points).

Egwu fouls out, having accounted for something like one-third of Northwestern's offense.

Northwestern's scoring drought is nearly as long as its bowl victory drought was.

Northwestern should just not come back out onto the floor after this timeout.

HALFTIME: There were no free points for Northwestern, as Illinois held the Wildcats to 22 percent shooting in the first half en route to taking a 29-15 halftime lead. The Fighting Illini, who ended the half on a 10-0, led by as many as 14 points and never trailed. Reserve Tracy Abrams scored 11 points and dished out three assists to lead Illinois, which also received seven points from D.J. Richardson. Alex Marcotullio and Reggie Hearn have shouldered the offensive burden for the Wildcats, scoring 14 of the team's 15 total points. Marcotullio has scored eight and Hearn has added six.

Only three NU players scored in first half, and one of them was Olah with one point.

At halftime Northwestern is on pace for 30 points. That would be okay in football.

Hard to miss as many layups as Illinois has in first half.

OK, I know guys are hurt, but that was just awful by Northwestern. The safety valve inbounds pass should not be such a challenge.

Alex Olah not starting for #Northwestern. Biggest Cat in lineup is 6-8 Mike Turner.

In the last 3 games, Abrams has 16 assists, 3 turnovers. Those are winning numbers. #dechr

There is A LOT of #Illini orange inside Welsh-Ryan Arena. #Northwestern

Groce & Carmody exchange pleasantries. One has hair & no tie. Other has tie & no hair. I guess you can't you cant have it all. #illini #NU