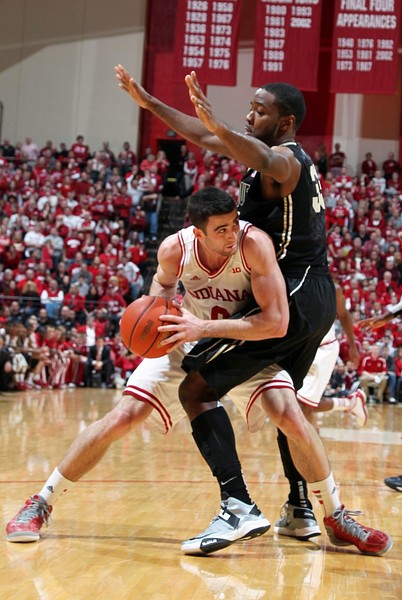 Will Sheehey scored a career-high 22 points, on a perfect 9-of-9 effort from the field, and Cody Zeller had 19 as No. 1 Indiana rolled over Purdue 83-55 on Saturday, routing the Boilermakers for the second time in 2 1/2 weeks.

Indiana (23-3, 11-2 Big Ten) bucked the recent trend of No. 1 teams losing and will likely keep the top spot for a third straight week. It also will retain at least a share of the league lead.

The Hoosiers have won eight of their last nine games.

A.J. Hammons gets slam for Purdue:

FINAL: Cody Zeller scored 19 points and grabbed nine rebounds and Will Sheehey added 22 points and three boards to lead No. 1 Indiana to an 83-55 victory over Purdue on Saturday at Assembly Hall in Bloomington. Indiana (23-3) shot 56 percent from the field (30-of-54), including 42 percent from distance (8-of-19), and also received double-digit games from Jordan Hulls (11 points) and Christian Watford (14 points). Anthony Johnson scored 11 points and hauled in three rebounds for Purdue (12-14), which shot just 38 percent (21-of-56). Purdue also got a double-digit performance from Terone Johnson (11 points). The Hoosiers outrebounded the Boilermakers 42-31. Indiana never trailed in the game. The Hoosiers' largest lead was 34, which came with 3:05 remaining.

Will Sheehey goes 9-9 from the field as Indiana routs Purdue 83-55. Best sixth man in college basketball.

As poorly as Purdue has played, Sandi Marcius has been a bright spot for the Boilers.

Hammons is going to have nightmares of Christian Watford tonight. Watford has locked down on the freshman #IUBB

Every time Tom Crean walks up and down the bench, Oladipo looks up at him like a little kid wanting to reenter the game. #iubb

Both teams sent to the bench after a little skirmish. They're going to check the monitor.

At this point, I think Painter is running out of ways to inspire his team. If they haven't gotten it by now…

Hoosiers come out of the locker room. Oladipo is not with them. #iubb

HALFTIME: Christian Watford has 13 points on 4-of-5 shooting to lead No. 1 Indiana to a 41-29 lead over Purdue at the end of the first half. The Hoosiers didn't trail once in the first half and led by as many as 19 points. The Hoosiers fired often and fired with accuracy from distance, hitting 50 percent (6-of-12) of their three-point attempts, in addition to 50 percent from the field (14-of-28). Jordan Hulls added nine points and Cody Zeller chipped in with eight for the Hoosiers. Terone Johnson scored nine points to pace Purdue, which shot 39 percent.

Oladipo leaves with some type of left foot injury. Walked off gingerly.

#Indiana has 17 points off 11 #Purdue turnovers and #Hoosiers are shooting 50 percent. #Boilermakers

#Hammons playing kind of lackadaisical. Wonder if he's a guy who needs the ball to be tuned in.

#Purdue has six turnovers in just over eight minutes. #Boilers usually do decent job of taking care of the ball.

Once again, Purdue's conditioning (or lack thereof) stands out to me. Already guys with hands on their shorts looking tired.

There aren't many 7 footers who run like Cody Zeller. Wow. #Hoosiers continue to impress.

Just shocked at Purdue's lack of competitive toughness. Inexperience is almost part of the explanation.

Watford starts on Hammons, but he and Zeller will be doubling a lot. #iubb

Today is the 200th meeting of Indiana and Purdue. Boilermakers lead the series 112-87.

Weird crowd at IU today..trying to be crazed but it feels a tad over confident..IU v Purdue ESPN NOW!!