All signs point to No. 1 Indiana vs. No. 8 Michigan State 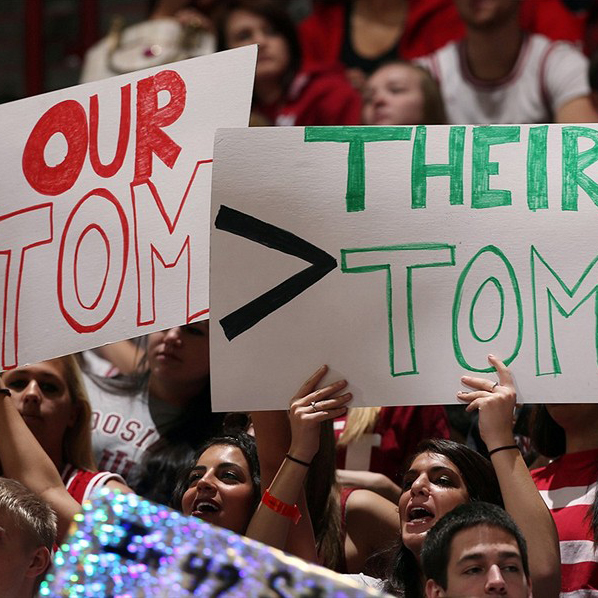 There were many winners this week in the Big Ten. But none were bigger than Indiana and Michigan State, which notched impressive victories that solidified their place atop the standings. And, it sets up what should be a huge game on Tuesday, when the Hoosiers visit the Spartans in this week?s version of the ?Game of the Year.?

Let?s take a look back and forward in the Big Ten.

THREE STOCKS TO BUY
1. Indiana. The stunning loss to Illinois last week was an aberration. The Hoosiers rebuttal to that shocking defeat was to thump Ohio State in Columbus on Sunday. When every team in the Big Ten is playing its best-none is better than Indiana, which is a simply an awesome machine of efficiency.
2. Michigan State. The Spartans have run off four victories in a row, showing their full fury in a demolition of Michigan on Tuesday. If Gary Harris and Keith Appling are hitting shots, this team is an inferno of production with a front line that is unmatched. This is a tough, physical and well-coached team that continues to improve. Sound familiar?
3. Illinois. The Fighting Illini are on a roll, pushing their winning skein to three in a row with a 20-point victory over Purdue on Thursday. Prior to the run, Illinois had lost six of seven and teetered toward the NCAA bubble. But now, the Illini look primed to lock up a bid by winning three of their final six games. Expect it to happen.

THREE STOCKS TO SELL
1. Purdue. The Boilermakers run of six consecutive NCAA trips is all but finished. This is an offensively challenged team that must have everything clicking to have any chance to win. And that rarely happens vs. good teams. Where are the shooters? Where are the leaders? Where is the desire? Will this team win one more regular-season game?
2. Northwestern. The poor Wildcats. They looked perhaps finally to end that terminal NCAA drought. But injuries are ruining those dreams. First, it was Drew Crawford. Next, it was Alex Olah and Jared Swopshire. On top of that, top talent JerShon Cobb was suspended before the season started, due primarily to academics. It?s been that kind of year. NU has lost four of five entering the weekend.
3. Michigan. Don?t get me wrong: The Wolverines still are a great team. But Michigan has lost three of its last four games and is seeing its Big Ten title dreams-and possibly No. 1 seed-vanish. This team needs to play better defense, get more from the post and show some grit and toughness. Aside from a win at Minnesota, Michigan has failed in every tough environment it has played in.

THREE THINGS I LEARNED
1. This is Bo Ryan?s most impressive coaching job in his 12 seasons at Wisconsin. The Badgers were picked by most to be a middle-of-the-pack team without star point man Jordan Taylor. Well, look at the Badgers now, still in the hunt for the Big Ten title even with the loss last night at Minnesota.
2. Michigan needs to get tougher. The Wolverines wilted in the spotlight of the big game at Michigan State. Tim Hardaway, Jr., can?t disappear like he did in East Lansing. And Glenn Robinson III seems to have hit the proverbial freshman wall. Who is this team?s leader?
3. Iowa still has a shot at an NCAA bid. The Hawkeyes are 16-9 overall and 5-7 in the Big Ten. If Iowa-which lacks quality wins–can get to 9-9 and win a game or two in the Big Ten tourney, it could earn a NCAA bid. The remaining schedule includes Minnesota; at Nebraska; Purdue; at Indiana; Illinois. Nebraska. I think Iowa could win five or six of those games. If the Hawkeyes do that-and a game in the Big Ten tourney-it could earn an NCAA invite.

1. Michigan State 75, Michigan 52. A ballyhooed battle between top-10 teams turned into a blowout of monumental proportions. The Wolverines looked tentative and intimidated in a hostile environment vs. a tough and physical Spartans team. Gary Harris was the best player on the court-and he?s just a freshman.

2. Indiana 81, Ohio State 68. This was the Hoosiers at their buzz-saw best, as Cody Zeller, Victor Oladipo and Christian Watford each notched over 20 points. The Indiana defense was impressive, too, as the Hoosiers showed no hangover after suffering a stunning loss at Illinois in the previous game. When IU plays like this, it can?t be beat.

3. Illinois 57, Minnesota 53. Sure, Rodney Williams didn?t play for the Golden Gophers because of injury. Still, it was an impressive triumph for the Fighting Illini coming off a huge win over No. 1 Indiana. There was no let down for an Illinois team that is fighting for its NCAA life. Well done, John Groce.

THREE GAMES TO LOOK FORWARD TO
1. Indiana at Michigan State, Tuesday. It doesn?t get any better than this. A battle between top-10 teams that are in first-place in the Big Ten. The Hoosiers won the first meeting, 75-70, in Bloomington. Can?t wait to watch the Spartan big men battle Cody Zeller. Can IU match MSU?s toughness and physicality?
2. Ohio State at Wisconsin, Sunday. These are two of the Big Ten?s top defensive teams, so expect a low-scoring game. The Badgers have played three overtime games in a row. Will it show?
3. Minnesota at Iowa, Sunday. The Gophers may have solidified their NCAA bid with a big home win over Wisconsin last night. The Hawkeyes have work to do. No doubt, a victory over a good Minnesota team would help a resume that needs polish.