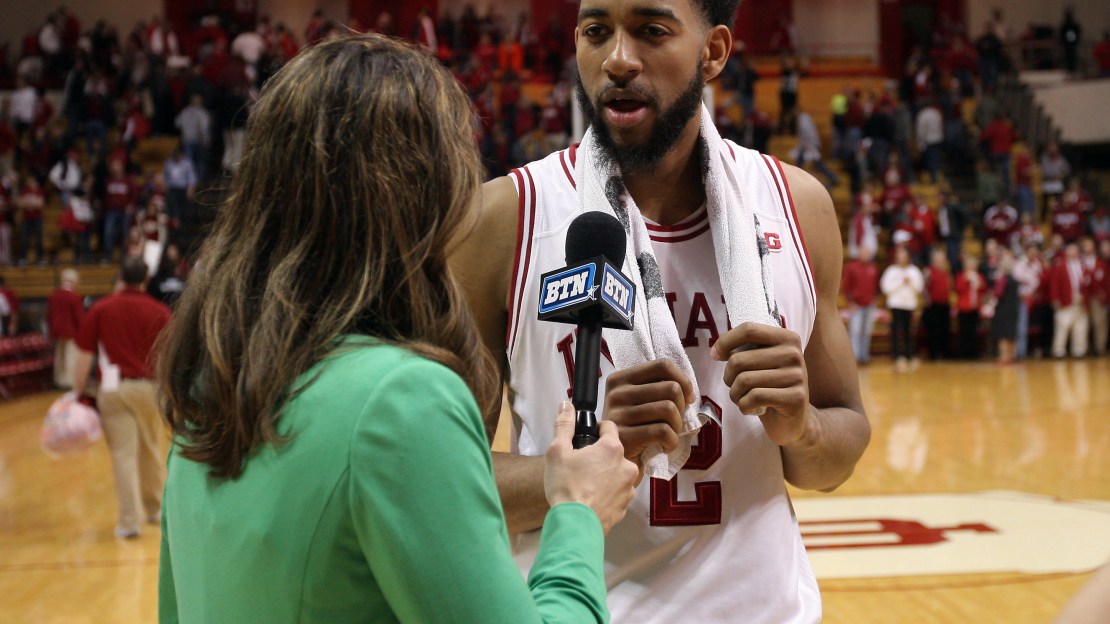 Seeing as how this is Valentine?s Day, I?ll start with this heart-warming tale of the enduring marriage of Minnesota coach Jerry Kill and his wife Rebecca. OK. My Valentine?s Day obligations have been met. On to the daily links, including a look at an uphill fight for Ohio State, an update on the slipping Gophers, an uptick for the Illini, and more.

If Ohio State wants to win a fourth consecutive Big Ten title, it faces an uphill battle. And it will need a big week to stay in the race.

The Buckeyes get Northwestern tonight, then visit Wisconsin over the weekend and then play host Minnesota in the next three games before getting the Spartans in Columbus. Doug Lesmerises of the Cleveland Plain Dealer says that what happens over the next week will determine whether the Buckeyes play MSU still fighting for a fourth-straight Big Ten title or just positioning themselves in the middle of the pack, trying to finish fourth or higher to avoid having to play the first-round Big Ten tournament game that comes for anyone fifth or lower.

Is Minnesota still an NCAA team? The Gophers are in a funk that has seen them lose six of their last eight games.

Minnesota can improve its sagging stock at home vs. Wisconsin tonight. In fact, Charley Walters of the St. Paul Pioneer Press thinks Minnesota can punch its NCAA ticket with three more wins in its last seven games, which would give the Gophers an 8-10 Big Ten mark. And, I think he?s correct.

Besides the Badgers, Walters notes that Minnesota still has to play at Iowa and Ohio State, then has Indiana and Penn State at home, then travels to Nebraska and Purdue before the Big Ten tournament. So, this is very doable for the Gophers. But, so much more was expected from a team that began the season 12-0.

Illinois ended the misery of an eight-game losing skid vs. Purdue with an emphatic-and I mean an emphatic-win over the Boilermakers last night. The Fighting Illini now have won three in a row after losing six of seven games, continuing to rise from the dead and make a push to solidify a spot in the NCAA tourney.

While Illinois is sitting pretty, where does Purdue go following this beat down at Illinois?

It?s time to stop blaming youth for a demise that has the program on track to miss the postseason. In order to be successful down the stretch, Jeff Washburn of the Lafayette Journal Couriers says the Boilermakers have to play harder than their opponent. Right now, especially in five of the past seven games, that isn?t happening, and Purdue is headed for its first losing season since Painter?s first campaign in 2005-2006.

Nice feature here on Indiana?s constantly fretting Tom Crean. Relax, Tom. You have the best team in America. Enjoy the moment. Enjoy the ride. Seasons like this don?t come around too often.

After getting ripped at Michigan State on Tuesday night, Michigan?s toughness and effort has been called into question. And rightly so, I may add.

Nick Baumgardner of MLive.com says the recurring theme in Michigan's four losses this season has been its toughness, or lack thereof, against teams that pride themselves on playing physical defense. That physical MSU defense led to 16 Michigan turnovers, which led to run-out points, which led to a blowout. And no one, except for Trey Burke, responded.

Still yearning for more from Michigan State?s big win over Michigan? Well, here you go. Exhaustive scouting was a big reason why the Spartans were able to flummox the potent Michigan offense. The players studied the Wolverines on their iPads using a cutting-edge App. It?s all very fascinating.

You have to check out this Woody Hayes statue that has been erected in front of the Ohio State football facility. It?s all part of a celebration to commemorate Hayes? 100th birthday.Will a bronzed likeness of Urban Meyer one day be erected next to it? Hmmm.

Ready or not: Sam McKewon of the Omaha World-Herald unveils his preseason Top 25 ? for football.

That staff stability that for so long had been a staple at Iowa is no more. Hawkeyes coach Kirk Ferentz is on the market for another assistant after defensive backs coach Darrell Wilson left to join Rutgers.

With Wilson?s departure, Marc Morehouse of the Cedar Rapids Gazette says that Iowa will have replaced five of the nine full-time assistants who began the 2011 season in a span of 18 months. That number will grow by one more, too. Running backs coach Lester Erb will not return to Iowa next fall, according to Morehouse?s sources. Wilson was asked to move to running backs coach, but he declined and accepted the job at Rutgers. Fallout from that 4-8 season continues in Iowa City.

I like the fact the Big Ten is discussing plans to move to a nine- or 10-game Big Ten schedule. But that also means fewer non-conference games could be on the horizon. And that could mean the end of some traditional rivalry games, like Iowa vs. Iowa State. Frankly, that would be too bad.

Tim Miles on #Nebrasketball's early foul trouble: "It was like trying to be the captain of the Titanic."

My take: I love Tim Miles. And you should, too.

Gary Harris is shooting 45 percent from 3-point range, if he gets extended minutes for the next month, that NBA stock goes up.

He?s easily the top freshman in the Big Ten. And he may be NBA-ready right now. Yes, he?s that good.

Groce is taking his wife on a recruiting trip for Valentine's Day. For her sake, I hope said recruit is best player out of the Bahamas.

My take: What a great wife Groce has. Am I right, fellas?

My take: To me, Abrams is the key guy for Illinois. If he stays dialed in, distributes, hits shots and plays some defense, the Illini are very good.

Coach Tubby Smith said that he expects Rodney Williams to be back tomorrow. Wouldn't say for sure if he would be starting. #Gophers

My take: Just having Williams will be big for Minnesota tonight vs. Wisconsin. The Gophers missed him vs. Illinois, as Tyler Griffey went off.