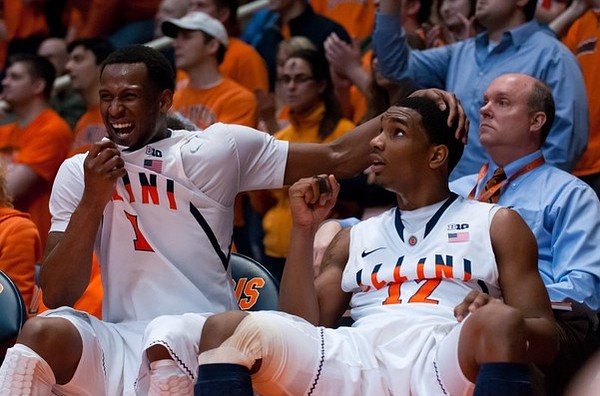 D.J. Richardson scored 18 points and Illinois opened up a big first-half lead that buried Purdue 79-59 on Wednesday night. The win was the third straight for Illinois (18-8, 5-7 Big Ten), which is clawing its way back into the postseason picture. The other wins were resume-builders over No. 1 Indiana and then-No. 18 Minnesota.

A dunk by Tyler Griffey with 8:46 remaining put Illinois up 64-46. The margin was too much for a Boilermakers team that had already tried to dig out of a 16-point first-half hole.

Griffey scored 12 points and Joseph Bertrand had a career-high 12 rebounds.

FINAL: Tracy Abrams scored 13 points and grabbed five rebounds and Joseph Bertrand added nine points and 11 boards to lead Illinois to a 79-59 victory over Purdue on Wednesday at Assembly Hall in Champaign. The Fighting Illini, who grabbed 22 offensive rebounds, received more scoring came from Tyler Griffey (12 points) and D.J. Richardson (18 points). Terone Johnson had 18 points and grabbed four rebounds and A.J. Hammons shot 4-of-6 from the field and scored 10 points for the Boilermakers, who shot 39 percent (21-of-54). Illinois won the battle on the boards as well as the game, as it outrebounded the Boilermakers 46-33.

I'd say it's been a tough season for Purdue.

I wish Matt Painter would send a tweet from the locker room, a la Tim Miles.

Wow. About time, Matty. Most pissed I've ever seen him.

They threw out Painter?! Damn…

Joe Bertrand plays like someone who just discovered the "freestyle" button. 3 jukes per dribble.

Abrams in #12 jersey and back in the game

#illini starting to talk smack to Purdue bench. Haven'tseen that in a while. Griffey offensive rebound, bucket = 48-32 UI lead

Danny Hope was still Purdue's football coach the last time Illinois did this well in a first half.

HALFTIME: Illinois has the lead at the break, 43-29, as well as the rebounding edge, which the Fighting Illini dominated by a 21-14 margin. Leading 22-18, Illinois went on a 9-0 run to break open the game. Tracy Abrams compiled a solid all-around first 20 minutes, with five points, three rebounds and five assists to lead the Illini, who also got eight points from Sam McLaurin. Brandon Paul, Illinois' leading scorer (17.3) has been limited to three points. Illinois applied the pressure in the first half, earning second-chance opportunities with 11 offensive rebounds, to just six for the Boilermakers. The Fighting Illini shared the ball, finishing with 11 assists on 17 field goals in the first half. Purdue's Terone Johnson scored 10 points to lead all scorers.

Now, this is how Illinois should treat Purdue.

No letdown for the hot #Illini. Paul, Richardson, Bertrand, Abrams and Co., playing with a purpose. #Purdue?

Groce just called to the bench for Brandon to get in the game… then realized he already was.