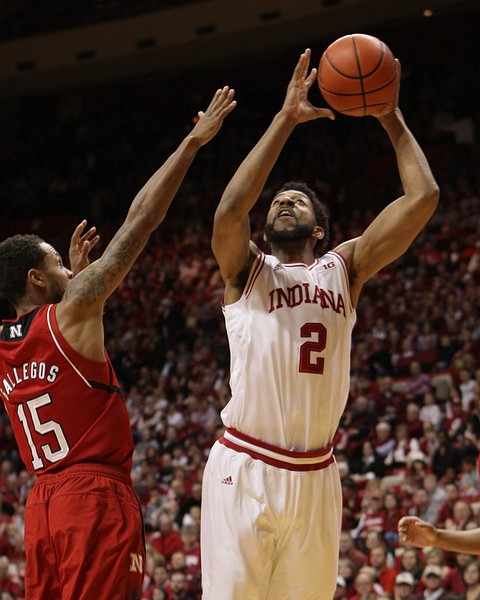 Cody Zeller scored 16 points and Christian Watford finished with 13 points and 11 rebounds to help No. 1 Indiana pull away from Nebraska 76-47 on Wednesday night. The Hoosiers (22-3, 10-2 Big Ten) have won seven of eight and regained a share of the league lead. They are tied with Michigan State.

But it sure wasn't easy against Nebraska (12-13, 3-9), which frustrated Indiana by limiting possessions and repeatedly taking the shot clock inside of 10 seconds in the first half. Dylan Talley scored 10 of his 16 points in the first half to lead the Cornhuskers.

Will Sheehey drives for bucket:

Tim Miles screamed for timeout. Ret turned to point and give it to him and smacked Miles in the face. Water went flying. Miles laughed.

Gallegos gets his first 3 pointer of the night, pulling Nebraska within 39-26; Huskers with the ball following the media timeout #Huskers

Hulls might have the quickest release in college basketball.

Took IU over 10 minutes to get 3 FGs in first half, just a minute and a half in second half to get 3 FGs

The basketball IU has played since halftime have the distinct feel of being inspired by what my father calls a "come to Jesus meeting."

We have to handle the ball better and quit fouling to put them on the line.

FINAL: No. 1 Indiana held Nebraska to 17-of-47 shooting, as defense led the Hoosiers to a 76-47 victory on Wednesday at Assembly Hall in Bloomington. Indiana (22-3) held Nebraska (12-13) to 36 percent shooting from the field and hauled in 24 defensive boards, while only allowing eight offensive rebounds. Christian Watford gave the Hoosiers a boost, thanks to 13 points and 11 rebounds. The Hoosiers also got solid contributions from Victor Oladipo (13 points) and Cody Zeller (16). Indiana shot 8-of-17 from three-point range during the game, good for 47 percent and 24-of-29 from the free-throw line. Dylan Talley contributed 16 points and shot 7-of-12 from the field for the Cornhuskers in a losing effort.

HALFTIME: No. 1 Indiana leads 27-18 at halftime after locking down Nebraska's offense, holding the Cornhuskers to 41 percent shooting and just seven field goals. The Hoosiers built their lead by attacking the rim and getting to the foul line (13-of-16). Dylan Talley scored 10 points and Shavon Shields added four for Nebraska, which failed to tally a single assist in the first 20 minutes. Nebraska leading scorer Ray Gallegos (13.3 ppg) was held scoreless. Victor Oladipo and Christian Watford paced the Hoosiers with seven and six points, respectively. Oladipo also tallied two steals and Watford corralled four rebounds.

This is the fifth time this season Indiana has held an opponent under 20 in 1st half. Fewest was Northwestern's 17

Not quite the shooting disparity it was a few minutes ago, but Nebraska still shooting 7-of-13 to IU's 6-of-18. #IUBB #IDSMBB

Nebraska has zero assists and eight turnovers. Not exactly a winning recipe on the road.

Nebraska is shooting a higher percentage and outrebounding IU.

IU's rushing it now offensively. Nebraska doing one of the few things it does well - holding onto the ball - and not letting IU run. #iubb

How can Andre Almeida possibly guard Cody Zeller? That has to be as big of a mis match as I've seen in the Big Ten this year.

Harder to start fast here at Assembly Hall when its as quiet as it is tonight. Nebraska up 6-4 early. #iubb

#Hoosiers are one of four teams since 1996 to remain No. 1 after a loss, according to STATS. UK did it last year.

#Huskers are 1-12 vs. ranked foes since joining the #B1G. The lone win: vs. #Hoosiers last year. Rematch at 7 ET tonight on BTN.