No. 8 Michigan State throttles No. 4 Michigan 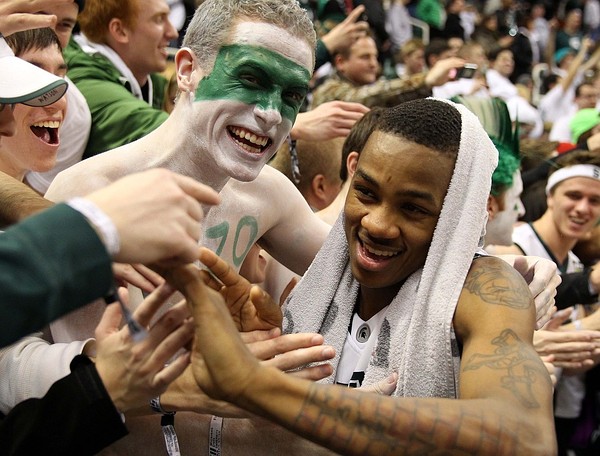 The Wolverines (21-4, 8-4) have lost three of four, but the closely contested setbacks on the road against the Hoosiers and Wisconsin were nothing like the latest.

[ RELATED: Izzone wears "You Off" shirts for Michigan game ]

Michigan State didn't trail once, led by as many as 16 points in the first half and enjoyed 30-point leads in the second half.

Branden Dawson gets early And-1 opportunity:

FINAL: No. 8 Michigan State pulled out a stunning 75-52 victory over No. 4 Michigan on Tuesday at the Jack Breslin Student Events Center in East Lansing. Michigan State (21-4) dominated Michigan (21-4) en route to the victory, shooting 48 percent from the field. Even in defeat, Trey Burke came through for the Wolverines with 18 points, four assists, 7-of-11 shooting from the field, and 3-of-5 shooting from beyond the arc. Derrick Nix sparked the Spartans, as he contributed 14 points, hauled in five rebounds, had three assists, and knocked down 6-of-9 shot attempts for Michigan State in the game. The Spartans were able to secure 18 offensive boards. Michigan State also got double-digit efforts from Gary Harris (17 points), Keith Appling (11) and Branden Dawson (10).

Michigan State up 20-plus on Michigan; if they were scoring toughness points, it would be 50-plus.

Trey Burke has 16 on 6-9 shooting for Michigan. Rest of team has 20 points on 9-26 shooting. #MSU dominating everywhere

Trey Burke back in the game. Michigan can't afford to not have him out there right now, down 19…

No one better than Izzo!!!!

And that's why you don't take Burke out.

Turn out the lights Michigan, the party is over. #Badgers

#Michigan is anything but N*Sync tonight. Like anything. People, friends, help me think of something more apt than WE ON.

Burke now with 3 fouls — have to just let him go here.

HALFTIME: No. 8 Michigan State took full advantage of the stellar combination of Derrick Nix and Gary Harris, ending the first half against No. 4 Michigan up 36-24. Nix scored 10 points and shot 4-of-5 from the field, while Harris scored 11 points and hit 3-of-5 three-point tries. The Spartans, who have outrebounded the Wolverines 20-12, led from the start and led by as many as 16 points. Through 20 minutes of action, a major weapon for the Spartans has been shut down, as Michigan has kept Keith Appling in check (3 points). After already giving up eight offensive rebounds to Michigan State, the Wolverines will have to keep the Spartans off the boards in the second half. Michigan's Trey Burke already has 10 points and three assists.

The Gary Harris-Nik Stauskas matchup has been the most fun to watch so far. Two terrific freshman guards.

If you've got a decent zone in the bag, it's time to use it, Michigan.

Denzel Valentine is my favorite kind of player. You don?t have to be the fastest or most athletic. Play angles.

They can't mess with us fellas!!! we too deep…

It is 100 percent personal between Jordan Morgan and Derrick Nix. Dating back to their high school days…

McGary makes his first career start as a freshman. #GoBlue

Maize Rage shirt being torn apart by students in the Izzone. pic.twitter.com/QF7e1Lkg

In my three years on the beat, this is by far the rowdiest Izzone I've seen … and tip is still 25 minutes away

Hoke and Dantonio shaking hands…when do they start a fistfight over recruits?

Rumble at center court, anyone?

Novak not holding back with the Izzone. "I beat you guys all by myself two years ago," he told them

Hoke just walked in to a chorus of boos. He looked at the Izzone with a shrug and said "What?"

Michigan State going all-in on this "You Off" stuff — I see signs in the crowd, T-shirts everywhere, chants. … Now "Little Sister"

The worst part about playing this team is seeing them around campus! #BeatMichigan #sendembackhome

Let's just hope the game tonight is as good as the hype leading up to it has been, cause it has been FUN!

Michigan's Jordan Morgan is dressed and looks like he'll play.

Michigan has arrived. Nik Stauskas on the court first and the Izzone immediately chants "USA, USA" at the Canadian.