Today's links: All eyes on Battle of Michigan 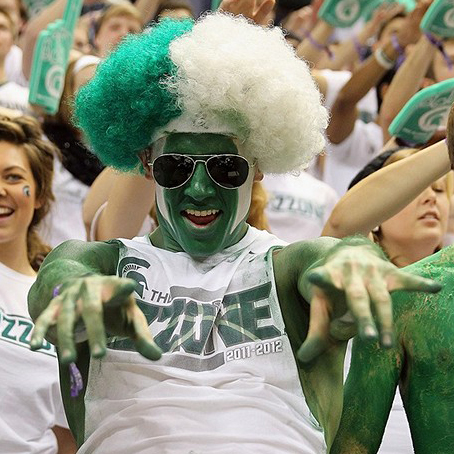 In case you live under a rock, I am here to tell you that there?s a big, big game tonight, with No. 4 Michigan playing at No. 8 Michigan State. So, work rules dictate that I start daily links there. Spartans coach Tom Izzo is worried about Wolverine point man Trey Burke. What coach wouldn?t be? Izzo thinks Burke controls the game better than any Big Ten player in a long, long, time.

Izzo also thinks the rise of Michigan is a good thing for his Spartans program. Really. He means it and said so with a straight face. Have a look.

And if you are looking for the genesis of the renewal of this rivalry, look no further than Michigan?s win in the Breslin Center two years ago.

Mark Snyder of the Detroit Free Press notes it was Michigan?s first road win over a ranked opponent since 2005, the first in East Lansing since 1997 and broke open the dam. Michigan rallied to slide into the NCAA tournament, routed Tennessee in its first game, nearly upset Duke in the next round and came back last year to tie for the Big Ten regular-season title. And, well, here we are today.

If you wanna take a walk down memory lane, check out these eight previous Michigan-Michigan State clashes when both schools were ranked.

My fav: a 1986 meeting, when Michigan State and Scott Skiles got the last laugh on Michigan and Antoine Joubert. Before this meeting, Joubert said Michigan would win. Skiles shot back: ?Not unless you lose 20 pounds, fat boy.?

And, finally, I?ll leave you this video trailer to stoke your fire one last time for this big matchup.

Oh, who do I think will win tonight? Michigan State. The Spartans are too strong inside, and Keith Appling is going to be ultra-motivated to show he?s Burke?s peer. Plus, playing at home is gonna help. A lot.

Five teams are ranked by the AP, and four players are legit national player of the year candidates, notes Barfknecht. And tonight?s Michigan-Michigan State game will add another layer of zaniest to these wonderful-and whacky–proceedings.

Still don?t think Indiana deserves to be No. 1 in the AP poll after it went 1-1 last week? Well, see if Terry Hutchens of the Indianapolis Star can convince you otherwise. Hutch got it right. If not Indiana, then I would have gone with Miami. How can Duke be ranked ahead of the Hurricanes?

Count Loren Tate of the Champaign News-Gazette among those who has no issue with fans rushing the court after big wins. But, will Illini fans rush the court if they beat Purdue on Wednesday? Uh, probably not, but the Boilermakers-12-12 and seemingly going nowhere fast–have won eight in a row over Illinois. Illini security may want to be on alert. I?m just saying.

Well, looky here: Wisconsin is back in the polls!

Jeff Potrykus of the Milwaukee Journal Sentinel notes that on Wednesday, Wisconsin rallied to defeat Iowa in two overtimes, 74-70. Then, on Saturday, the Badgers rallied to defeat then-No. 3 Michigan, 65-62, in OT. That gave Wisconsin six home victories over Associated Press top-five teams in the last seven seasons, tied with Pittsburgh for the best mark in the nation.
Amazing. These Badgers aren?t going away, America. So, let?s just embrace the ugliness, OK?

Big Ten football coaches have serious reservations about an impending rule change that will allow for unlimited contact between recruits and schools. In fact, they don?t want the rule to be passed, but it could become reality this summer.

The A.P. quotes Ohio State?s Urban Meyer on the idea, and he called it ?bad stuff.? Nebraska?s Bo Pelini said: ?The more time a kid is spending on the phone texting and on the telephone and doing all the other things that are taking away from that is doing the kids … a disservice."

The Big Ten also said yesterday that it is in favor of playing a nine- or 10-game league schedule. And it could happen as soon as 2014, when Maryland and Rutgers come aboard. Night games in November also could become a reality. There is no policy banning them, but schools had shown little interest in playing them. However, Commissioner Jim Delany says Ohio State, Penn State and Nebraska have shown interest in playing such games. So, bundle up, fans in Lincoln, Columbus and State College.

What I don't get is how you are allowed to hire unlimted recruiting staff that can all contact kids. That's a major advantage to power teams

My take: Who ever said college sports were about fairness and equity? Never have been, never will be. The chasm between the have and have-nots is huge. You all know who you are.

A couple of OSU home night games a year would be interesting. But the thought that almost all should be is not, especially in November.

My take: I couldn?t agree more.

Beilein: "Derrick Nix is one large man. He?s amazing. When he turns his shoulders you?re in a different zip code."

My take: No Big Ten player is more intimidating.

My take: Uh-oh: This isn?t good news for the Cornhuskers.

ESPN's Mark Schlabach bounced #badgers in his latest way-too-early top 25 for 2013. Didn't even include them in others to watch.

My take: I think this is a mistake. The Badgers have lots of talent coming back.

Trice not playing tonight for MSU, in my opinion, is bigger than Jordan Morgan being questionable for Michigan.

My take: Without a doubt. As Nick knows: Michigan State lacks another point guard who can chase Trey Burke; Conversely, Michigan has other big men.